Hailed by Cornel West as “the leading socialist economist in the country,” Richard D. Wolff paints a very different picture of the global economy to that offered by mainstream commentators. His new collection, Capitalism’s Crisis Deepens: Essays on the Global Economic Meltdown, covers the failures of neoliberal policies and austerity, the massive upward transfer of wealth in this latest stage of capitalism, and more. Order this book today by making a donation to Truthout!

This article was originally written by Richard D. Wolff in October of 2013 and is included in his anthology, Capitalism’s Crisis Deepens:

The economic aim of both major US political parties is, in the end, the same: to protect and reinforce the capitalist system.

The Republican Party does so chiefly by means of a systematic, unremitting demonization of the government. They blame it for whatever ails the capitalist economy. If unemployment grows, they point to government policies and actions and attack particular politicians for what they did or did not do to stimulate the economy, directing criticism away from the employers who actually deprive workers of their jobs.

Republican solutions for capitalism’s ills always involve reducing the government’s demands on private capitalists — lower their taxes, deregulate their activities, and privatize government production of goods and services. Their program for the future is always: free the private capitalist system from government intervention and you will get “prosperity” and growth.

The Democrats protect and reproduce the system by assigning to the government the task of minimizing the problems that beset capitalism. So, for example, they want the business cycles that are an inherent affliction of capitalism to be foreseen, planned for, minimized, and overcome by government intervention. This is the underlying purpose of Keynesian economics and the monetary and fiscal policies it generates. 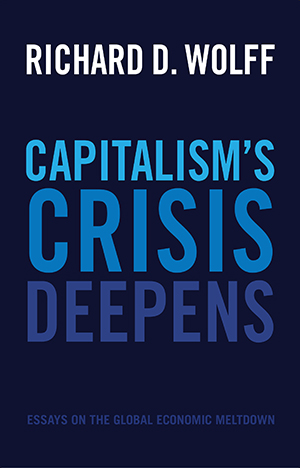 (Image: Haymarket Books)From the GOP, you will hear denials that such self-destructive tendencies even exist. Economic problems always reduce to pesky and unwarranted government tampering in the free market. The few Republicans who will admit that capitalism is responsible for its own ailments also see capitalism as a fully self-healing system. The best solution for capitalism’s problems, they insist, is to let the system function and correct them. Anything else will just make matters worse.

Most Democrats will paint Republicans as slavish servants of short-sighted corporations and the few whom they make rich. These, say Democrats, threaten capitalism’s survival by failing to utilize government solutions to problems that consequently become worse and increasingly dangerous, putting the whole global economy — and capitalism’s reproduction — at systemic risk.

Republicans will disregard Democratic economic policy as steps toward what they call “socialism”: socialism defined as government ownership and operation of what should be private enterprises.

Neither party, though, has figured out how to prevent capitalism’s business cycles. Both consistently fail to make sure that cycles they failed to prevent would be shallow and short. So today, Republicans blame the crisis since 2007 on government over-regulation and interventions in the housing and finance markets (and they blame Democrats for championing those policies). Democrats blame the crisis on too little regulation of those markets and insufficient redistribution (and — you guessed it — they blame Republicans for opposing those government policies). In short, crises, like everything else, are just opportunities to be explained and exploited politically to advance each party’s characteristic policies and their electoral strategies.

In what were “normal times,” US capitalism would reproduce itself with nice, calm oscillations between Republican and Democratic presidencies and congresses. For the minority of Americans who legitimately cared about which party was in or out, their interests focused on issues usually disconnected from any structural debate about the capitalist economic system. These included local and regional issues; foreign policy; and social issues like sexuality, access to guns, flag-burning, and draft protests. Capitalism rolled along, in part, because both parties functioned as alternative cheerleaders for it, treating it as beyond criticism.

Recent political gridlock and shutdowns suggest a “new normal” has arrived. Political combat between the parties has become more intense and intractable, because capitalism has changed since the 1970s. By then, the post-World War II boom in Western Europe, North America, and Japan — and also anxieties about the Soviet Union, China, and their allies — had lofted real wages and government-funded social services far above their levels in capitalism’s global hinterland, especially Asia, Africa, and Latin America. Capitalists in Western Europe, North America, and Japan were therefore eager to evade both the high wages and the taxes they faced.

Major technical breakthroughs at the time made evasion possible. The ubiquitous availability of jet travel made movement around the globe much easier, cheaper, and faster. Computer and telecommunications advances enabled enterprise headquarters to monitor, command, and control production facilities anywhere on the planet. It suddenly became practical to move production and distribution sites from locations of high wages and taxes to locations of poverty and weak government. Sharp competitors led the way as first manufacturing and then service jobs were increasingly “exported” or “outsourced.” Laggards suffered and so learned the importance of following their more nimble competitors.

Most Republicans and Democrats facilitated the process by endlessly promoting “free trade” and arguing that any constraints on free enterprises’ relocations were unthinkable, inefficient, and (other synonyms for) “really bad.” As more and more jobs left the United States, and formerly prosperous cities and states entered long-term declines, the two parties blamed their favorite targets: one another.

The idea that capitalism and capitalists were the problem was something neither Democrats nor Republicans allow into their debates and talking points. Yet it was precisely capitalists’ profit-driven, self-interested decisions to move that have caused our economic problems. And so they remain.

Copyright (2016) by Richard D. Wolff. Not to be reposted without the permission of the publisher, Haymarket Books.