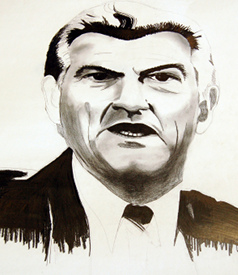 The Order of Mates celebrated beside Sydney Harbour the other day. This is a venerable masonry in Australian political life that unites the Labor Party with the rich elite known as the big end of town. They shake hands, not hug, though the Silver Bodgie now hugs. In his prime, the Silver Bodgie, aka Bob Hawke or Hawkie, wore suits that shone, wide-bottomed trousers and shirts with the buttons undone. A bodgie is an Australian version of the 1950s English Teddy Boy, and Hawke’s thick, gray-black coiffure added inches to his abbreviated stature.

Hawke also talked out of the corner of his mouth in an accent that was said to be “ocker,” or working class, although he himself was of the middle class and Oxford educated. As president of the Australian Council of Trade Unions, his popularity rested on his reputation as a hard-drinking larrikin, an Australian sobriquet once prized almost as much as an imperial honor. For Hawke, it was the disguise of one whose heart belonged to the big end of town, who cooled the struggles of working Australians during the rise to power of the new property sharks, minerals barons and tax avoiders.

Indeed, as Labor Prime Minister in the 1980s, Hawke and his Treasurer Paul Keating eliminated the most equitable spread of personal income on earth: a model for the Blairites. And the great Mate across the Pacific loved Hawkie. Victor Marchetti, the CIA strategist who helped draft the treaty that gave America control over its most important spy base in the southern hemisphere, told me, “When Hawke came along … he immediately sent signals that he knew how the game was played and who was buttering his bread. He became very co-operative, and even obsequious.”

The party overlooking Sydney Harbour on 12 July was to launch a book by Hawke’s wife, Blanche d’Alpuget, whose effusions about the Silver Bodgie include his single-handed rescue of Nelson Mandela from apartheid’s clutches. A highlight of the occasion was the arrival of the brand new Prime Minister Julia Gillard, who proclaimed Hawke her “role model” and the “gold standard” for running Australia.

This may help explain the extraordinary and brutal rise of Gillard. In 48 hours in June, she and Mates in Labor’s parliamentary caucus got rid of the elected Prime Minister Kevin Rudd. Her weapons were Rudd’s slide in the opinion polls and the power and prize of Australia’s vast trove of minerals. To pay off the national debt, Rudd had decreed a modest special tax on the profits of giants like BHP Billiton and Rio Tinto. The response was a vicious advertising campaign against the government and a threat to shut down mines.

Within days of her coup, Gillard, who was Rudd’s deputy, had reduced the new tax; and the companies’ campaign was called off. It was a repeat of Hawke’s capitulation to the mining companies in the 1980s when they threatened to bring down a state Labor government in Western Australia. Like her predecessors, Gillard is pursuing a land grab of the one region of Australia, the Northern Territory, where Aboriginal Australians have land and mineral rights. The deceit is spectacular and historical. The government claims it is “protecting” black Australian children from “abuse” and “neglect” within their communities. Official statistics show that the incidence of child abuse is no different from that of white Australians, and the true cause of Aboriginal suffering is a systemic, colonial racism that denies housing, water, roads, adequate health care and schools to indigenous people and harasses and imprisons them at a rate greater than in South Africa under apartheid.

Since her coup, Gillard has reaffirmed this racism at the heart of policy making. Australia takes fewer refugees than almost any other country, yet, Gillard is using their “threat” to outdo the hysterics of an especially primitive parliamentary opposition led by Tony Abbot, known as the “mad monk.” Gillard’s “hard line” on refugees has been welcomed by the openly racist former member of Parliament Pauline Hanson as “sweep[ing] political correctness from the debate.” Hanson’s One Nation Party is the equivalent of the white supremacist British National Party. Gillard, an immigrant from Wales, demanded that refugees heading for Australia be “processed” (dumped) in East Timor, an impoverished country whose genocidal occupation by Indonesia was backed by Australian governments. Now liberated, the East Timorese have read their massive, underpopulated neighbor a moral lesson by saying no.

Many of the refugees come from Afghanistan, which Australia invaded at Washington’s insistence. “Our national security is at stake in Afghanistan,” said Gillard on 5 July, linking a faraway tribal war and resistance to foreign invaders with three terrorist attacks in Indonesia in which Australians were killed. There is not a shred of evidence to support her statement. Australia’s security is probably unique; since 1915, an estimated 22 people have died as a result of politically motivated violence.

The new prime minister’s partner is a former hair products salesman called Tim Mathieson. This would be of no interest had he not been given the job of “Australia’s men’s health ambassador” by one of Gillard’s cabinet colleagues, the health minister, even though he had no experience in health care. Mathieson is now a “rising star” in real estate, thanks to one Albert Dadon, whose company is seeking planning permission for a contentious high rise development in Melbourne. Dadon can claim membership of the Order of Mates. As head of the Australia Israel Cultural Exchange, he arranges admiring tours of Israel for politicians and journalists. Gillard went on such a junket last year in the wake of Israel’s massacre of 1,400 people in Gaza, mostly women and children. She who would be the first female prime minister of Australia, drooled her uncritical supporters for their killers.