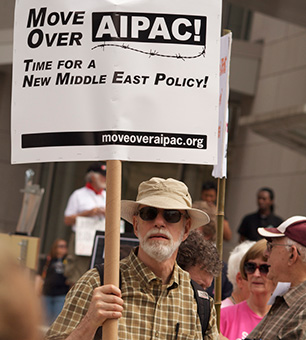 (Photo: mar is sea Y / Flickr)You may have noticed that sometimes participants in a political fight put significant energy into getting media to accept their definition of what “winning” is.

Now comes the American Israel Public Affairs Committee, lobbying the Democratic Senate for war with Iran. AIPAC wants the Democratic Senate to pass SB1881, a new Iran sanctions bill, over the strong objections of the Obama administration. The administration and ten Senate Democratic committee chairs, along with the U.S. intelligence community, say that passage of SB1881 would blow up US diplomacy with Iran and put the United States on a path to yet another disastrous Middle East war.

Here’s the goal that AIPAC needs to reach to claim victory, according to a Fox News report on December 27:

A total of 47 co-sponsors are now behind the legislation introduced by Menendez and Sen. Mark Kirk, R-Ill. Supporters are hoping to reach a 67-member, veto-proof majority (my emphasis).

Here’s the goal that AIPAC needs to reach to claim victory, according to a Reuters report on January 6:

While the bill has gained support, it remains uncertain if backers can put together the two-thirds majority in the Senate needed to override a veto by President Barack Obama (my emphasis).

These media accounts beg the question: What exactly is the significance of a “veto-proof majority” in this situation? Who decided at which meeting that would be the threshold for AIPAC to claim victory?

Fifty-five senators caucus as Democrats. So the “majority of the majority” in this case would be 28 Democrats, counting Bernie Sanders and Angus King as Democrats.

It certainly would be very appropriate for Majority Leader Reid to apply the Hastert Rule in this case. Blowing up President Obama’s diplomacy with Iran would be the foreign policy equivalent of repealing ObamaCare. If 67 senators signed a bill to repeal ObamaCare, and 45 of them were Republicans, do you think Reid would call that bill for a vote?

Suppose AIPAC could get all 45 Senate Republicans (two more) to sponsor the Menendez-Kirk bill. Then they would only need 22 Senate Democrats (six more) to get to 67. That is, they could get to a “veto-proof majority” while having only a minority of Democrats.

Thus, if the thing that matters is a “majority of the majority,” then a “veto-proof majority” is irrelevant. The number that matters is not 67 senators, but 28 Democrats. If, currently, AIPAC has 59 senators, among whom 16 are Democrats, then the key hurdle they have to overcome to claim victory is not to recruit 8 senators to reach 67 but to recruit 12 Democratic senators to reach 28, a significantly higher bar, given that any Democratic senator who signs the bill is clearly sticking a thumb in the eye of Obama and 10 Democratic committee chairs.

Some might say: How can you be happy when 59 senators have signed their names for blowing up diplomacy? I freely concede: It’s certainly not a good thing that more than half the Senate, including 16 Democrats, are Diplomacy Birthers, demanding long-form birth certificates to prove that senior US diplomats were not born in Tehran.

But context matters. Holding AIPAC to 59 senators is like holding Garry Kasparov to a draw, or “going the distance” against Apollo Creed. “We’ve got one lonely little guy down here,” President George H.W. Bush joked in 1991, when he stood alone against AIPAC’s lobbying onslaught for US aid to illegal Israeli settlements in the West Bank. These are the people who claimed that in 24 hours, they could get 70 senators to sign a napkin.

Thanks to the Friends Committee on National Legislation, you can call your Senators toll-free at 1-855-686-6927 in opposition to AIPAC’s Blow Up Diplomacy Napkin. You can quickly report the results of your call here.