On Tuesday, in a PR move that makes the GOP’s embrace of Cliven Bundy seem like genius by comparison, the New York City Police Department took to social media in a doomed attempt to get snuggly with the general population. The NYPD asked people on Twitter to share their positive experiences with New York cops via the hashtag #myNYPD, and for a few heartbeats, all was rosy…until it wasn’t.

Because someone posted their picture of a Black kid screaming in pain while getting hammered into a car hood by three armored cops.

And someone else posted their picture of a Black woman getting lit up by two armored cops while a third cop in an officer’s uniform tore the hair from her head with a look on his face that said he knew he was doing God’s good work.

And someone else posted their picture of a cop putting his knee to the neck of a small and clearly helpless dog above a caption that read, “The dog was reaching for a gun.”

And someone else posted their picture of a beefy cop with his fist cocked and rage painted across his big White face, said picture capturing the moment just before the cameraperson was punched.

And it went on, and on, eventually spreading across the country and the world, until #myNYPD became a repository for just about every documented incident of police brutality on the planet over the last three years.

Tricky tricky tricky, that social media thing. Given the NYPD’s well-documented deplorable behavior toward non-white people for generations, toward protesters going well back before the 2004 Republican convention, and most especially upon the advent of the Occupy movement, combined with the fact that modern telephonic technology pretty much makes everyone a photojournalist these days, one would think that whoever is in charge of the NYPD’s Twitter account would not be stupid enough to bait that particular bear.

Nope, and too late. Can’t un-ring the bell.

It’s not just New York. This eruption of police violence, of police malevolence, is nationwide. According to an Associated Press report from late last year, “Coming soon to your local sheriff: 18-ton, armor-protected military fighting vehicles with gun turrets and bulletproof glass that were once the U.S. answer to roadside bombs during the Iraq war. The hulking vehicles, built for about $500,000 each at the height of the war, are among the biggest pieces of equipment that the Defense Department is giving to law enforcement agencies under a national military surplus program.”

According to the ACLU, “Billions of dollars’ worth of military weapons and equipment is available to local police departments through grant programs administered by federal agencies such as the Departments of Defense, Justice, and Homeland Security. Until now, this has gone on with very little public oversight. Too little has been known about how much military equipment law enforcement agencies have, why they have it, and how they are using it.” 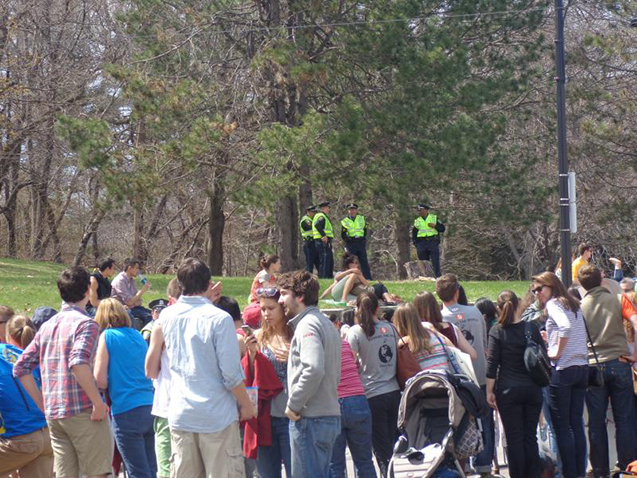 In April of 2013, I bore witness to the awesome and terrible potential of a militarized police force in my own neighborhood as the alleged Boston Marathon bombers were run to ground a few scant blocks from where my infant daughter slept. I heard the explosions echo through my neighborhood as the Tsarnaev brothers reportedly licked shots at pursuing cops and threw homemade bombs on residential streets in their attempt to flee. I saw hundreds of high-armored cops with tactical weapons invest a portion of Watertown, searching houses and displacing families in an attempt to capture someone they believed had bombed a public event, who may have had more bombs, who may have had friends…

I went back to the Boston Marathon this past Monday, and walked the last five miles of the course. Every fifty steps was an armed Military Police officer in camouflage gear, strapped with a sidearm, and there were hundreds of cops visible close to the finish line, and they even had a few of those nifty armored tanks left over from Iraq and Afghanistan parked on side streets and mostly out of view. Some 100 new cameras were deployed along the last few miles of the course, and I can’t find any information on when, if ever, they will be removed. 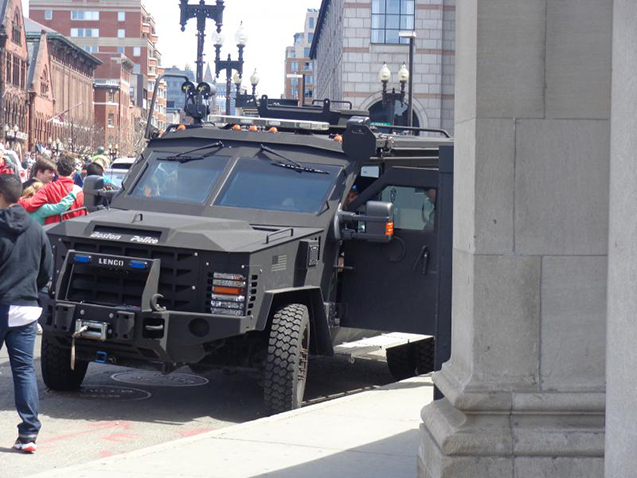 In retrospect, it seems as if the Marathon bombings might be a poor metaphor to use in any warning about the militarization of the police in America. After all, the Marathon was actually bombed last year, and the alleged perpetrators threw more bombs in their flight, and the fact of the bombing made this year’s Marathon a juicy target for copycats and the like, so it is hardly astonishing that there would be a heavy police presence working to secure 26 miles of road through a half-dozen towns surrounded by a million spectators cheering on 36,000 runners supported by 10,000 volunteers. Try it sometime if you think it should be easy.

Those who deploy terms like “police state” and “martial law” in reference to what happened last year in Boston miss the mark to a degree. To wit: all those cops left Watertown once it was over. The day after Dzhokhar Tsarnaev was captured last year, and the day after the Marathon this year, the streets were devoid of police, and filled only with the people. In a “police state,” under “martial law,” that doesn’t happen…unless, of course, you live in a predominantly Black neighborhood, but that sad truth can be said of virtually every major city in America. It ain’t just Boston, folks.

And yet, and yet…the powers-that-be in Boston, or New York, or Chicago, or in any small town across the country, have the power now to unleash full-fledged combat-ready personnel and weaponry upon the populace at a whim. Far more often than not, this power is grossly abused, to the sorrow of those on the receiving end. For sure and certain, Occupy protesters from New York to Oakland learned all too well what America’s 21st century police are capable of.

What we have before us is an ominous confluence – decades of profoundly racist “wars” on drugs and crime that inspired both voters and elected officials to slap aside Constitutional law in favor of the ongoing sham of “security,” 300 million guns loose across the countryside cocked and locked with the ammo of associated paranoia, piles of war weapons left over from our blood-sodden overseas adventures available to any township that asks for them, combined with and aggravated by the plastic-sheeting-and-duct-tape travesty that is the ongoing “War On Terror” – which has lulled us into believing there is nothing strange or abnormal or threatening about everyday cops driving tanks, wearing body armor and packing heat better suited for a battlefield in our back yards.

Also, and not to be overlooked, is the fact that some people do throw bombs into crowds. It happened, right there on live television.

The ultimate legacy of the Boston Marathon bombing – beyond the happy true tales of restoration and healing – will be its facile use as an excuse to further hyper-arm and militarize police forces all across the country. Towns with 5,000 residents will buy armored personnel carriers, civilians will be terrorized or killed by SWAT teams deployed to deliver simple subpoenas to non-violent offenders, the boot will continue to be pressed on the necks of our non-white friends and neighbors…

…and, in the end, it is hard to avoid the feeling that this tremendous arming of the police is inspired by the fear of unrest looming over the horizon, of rising seas, rising inequality, and the rising sentiment that just because it’s been like this for a really long time doesn’t mean it’s supposed to be like this.

Share
Copyright, Truthout. May not be reprinted without permission.
William Rivers Pitt