On February 5, protesters took to the streets of major Brazilian cities asking for justice. A young African man, Moïse Kabagambe, was lynched — tortured to death — on a beach in Rio de Janeiro in January. The alleged perpetrators, working men themselves, are in custody, and claim there was no intention to kill; that they were responding to the erratic behavior of the victim. The victim’s family, on the other hand, claims he was only asking to be remunerated for two days of work. No narrative, however, justifies what happened, which was caught on video.

To protesters, Kabagambe’s case went beyond the debate in court of whether his death was a homicide or an accident. The men involved claim their intention was to punish the immigrant for causing trouble, but the video shows how the beating went on for several minutes after Kabagambe was unresponsive, and the sheer physical stamina needed for the act implies hate was the fuel.

At the protest in São Paulo, African immigrants spoke of the disappointment they felt towards their reception in Brazil. Of how Brazilians need to do better to welcome African brothers and sisters, and to treat them as they would their family and neighbors. From the Congolese community, there was rage, pain and frustration; speakers’ voices cracked and pitched with angst. They came here looking for a better life, hoping to be embraced, and faced hostility and marginalization instead. Kabagambe’s case represents the rampant xenophobia Brazilians direct at Africans, remnant colonialism in labor relations and society at large, and the farce of racial democracy and meritocracy so often championed by Brazilian politicians.

Moïse Kabagambe was a Congolese refugee fleeing ethnic conflict, who arrived in Brazil as a child in 2014 with his mother and brothers. At Barra da Tijuca, a wealthy suburb of Rio de Janeiro, Kabagambe worked for daily wages, taking drink orders from people at the beach and delivering cocktails. According to his family, on January 22, he went to the Tropicália kiosk to ask for two days of pending wages. It was then that, at the age of 24, he was beaten to death at his place of work.

At the beach where he was brutally murdered, he was known as the “Angolan.” That’s like calling a Brazilian “Venezuelan” just because these countries are on the same continent. The lack of understanding about the circumstances which brought him to Brazil in the first place is already an injustice — one which will not be reversed with someone’s imprisonment.

By 2008, the Second Congo War, which started in 1998, had killed over 5 million people and is considered the deadliest since World War II. The first one happened right before, also in the ‘90s, and was a direct result of colonial and imperialist forces meddling with African leaders and exploiting ethnic differences in the region. Zaire, which is now known as the Democratic Republic of the Congo (DRC), was made into a rope in the tug-of-war between communist and anti-communist forces, until the dissolution of the USSR and of the U.S.’s interest in endorsing its leader.

After the CIA aided a coup to replace Patrice Lumumba with Mobutu Sese Seko in the mid ‘60s, the newly instated leader enjoyed robust financial and military aid from the United States for quite a while. Toward the final years of the Soviet Union, Seko leaned diplomatically towards China, and the U.S. began portraying his administrative tactics as “grotesque.” In fact, about seven weeks after the Los Angeles Times published a piece titled “U.S. Must Cut Ties to Mobutu,” the leader was forced into exile. A year later, the DRC had entered a new, even deadlier war.

Kabagambe was born the year one war ended and as another one started, which was a period when over 5 million children did not receive an education due to political turmoil — literacy levels were at their lowest, and child labor and exploitation at their highest. Throughout his youth, his country was under a so-called “peacekeeping” United Nations operation (MONUSCO) which did more to create a clandestine weapons industry than to prevent conflict. Among the countries involved in this operation was Brazil, with its military and police personnel. Today, a Brazilian general is the force commander of MONUSCO, and he is the fourth officer from Brazil to hold the position, making it the most represented country in terms of leadership in the operation.

Much before all that, the Congo region had already lived through atrocities under a Belgian regime and its rubber industry. Between the last decade of the 1800s and the first one of the 1900s, Africans under the colonial regime of Belgian King Leopold II were enslaved, mutilated and killed at horrific rates. Famine, disease and exploitation perpetuated by colonialism and its for-profit industries were responsible for the deaths of over half of the local population — uncountable lives.

Despite incessant geopolitical opportunism, Congo has endured geographically and thrives culturally. According to the World Wildlife Fund, “The Congo Basin has been inhabited by humans for more than 50,000 years and it provides food, fresh water and shelter to more than 75 million people.” The Congo River is the largest in volume after the Amazon River. Its tropical forest is also the largest after the Amazon. As a Brazilian, our passion for preserving our most magnificent and precious asset ought to be extended to our ecological neighbor, since, together, our countries are the keepers of the world’s most important wilderness areas left on Earth.

Congolese musicians and writers have also found artistic expression as a tool for self-esteem and power. Kolinga, a Congolese group, is around today making decolonial feminist anthems. Last century, soukous and Congolese rumba hits became international classics, perhaps best represented in the Congo Revolution compilation “Revolutionary and Evolutionary Sounds From The Two Congos 1955-62.” Literature, in need of more translation and wider distribution, is even more moving and representative of the artistic tide of the nation. The poem “Second Dimension” by the Congolese writer Rais Neza Boneza, from his book, Nomad, Sounds of Exile, is particularly insightful, perhaps even specifically to the plight of Kabagambe and his immigrant community in Brazil. May it speak for itself:

Near his table rests a glass of water;
Through his window he glances at passerby:
He observes and always waits, waits, waits.

Bitterness nourishes his being;
Subjected to misunderstandings
And false airs of ‘people’
He is a prisoner.

He sits, hands cupped around his chin
Solemnly thinking
In his dreaming, his spirits escape
The world of hardships
And travel in the expanses of the
Wild blue sky

He leans on his table, half worried, half-contented.
In this place of his there is no compassion;
Evil prowls around its prey;
Rancor sings its melody of morning,

A stranger to his land,
He melancholically sips from his glass–
A sip of freedom.
Marginalized and needy,
Very far is the wind of liberty blowing for him
He is a clandestine, always without address,
Not a nomad, but a recluse in the midst of humanity.

In his unbroken crystal enclosure
He follows the echoes of his silent screams.
A rock of madness, only solitude answers him.

He startles!
His heart rapidly beats!
He rises from his bed!
Ah! It’s only a nightmare!

This is a nightmare Moïse Kabagambe and his family will not wake up from, nor will the African diasporic community at large be shielded from the inhumanity of such brutal acts. But we can, as a society, begin to perceive justice as a much broader concept: Justice means seeing, respecting and appreciating the value of welcoming people into our communities. Justice means doing what we can to learn, understand and fight against a geopolitical paradigm driven by abuse and exploitation. Justice means thinking, asking and feeling the humanity in all of us. 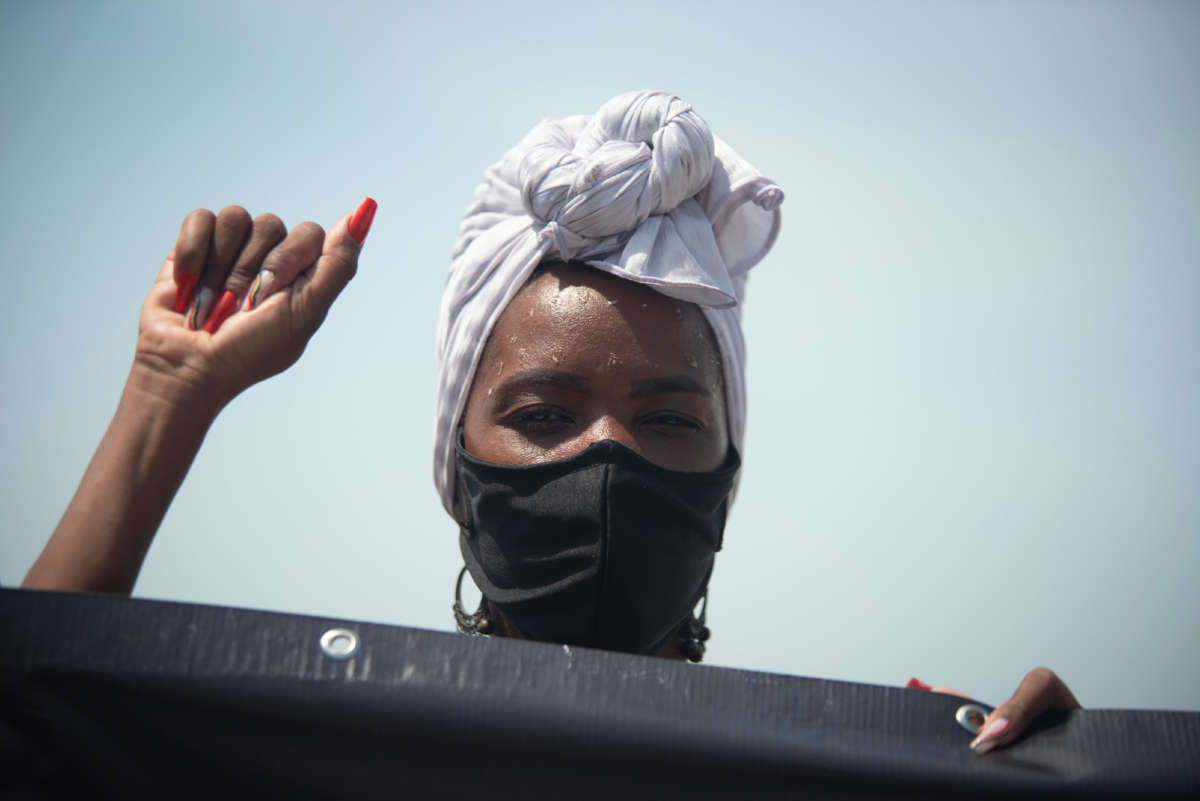 An earlier version of this article appears in Portuguese at Le Monde Diplomatique Brasil.

Share
Copyright © Truthout. May not be reprinted without permission.
Mirna Wabi-Sabi

Mirna Wabi-Sabi is a writer, editor and translator from Brazil. She is the founder of the Plataforma9 initiative and the author of the bilingual pocket book, Anarcho-Transcreation (Anarco-Transcriação).