Municipal bus drivers in northern Vermont have voted unanimously 54-0 to go on strike today against unsafe conditions, surveillance and discipline, and part-time status.

In a context where drivers nationally are standing up for work with dignity, a series of Vermont bus station rallies and pickets, City Hall speak-outs and old fashioned organizing have built union solidarity that could be a powerful model for public-sector drivers to use to reject austerity.

“Drivers are calling for a fair contract that treats drivers with respect, avoids increasing driver fatigue and creates livable jobs,” said Teamster local 597 member Rob Slingerland. “We are living in a world with more and more part-time jobs. People can’t make ends meet with part-time labor. The drivers can’t live under the terms of [Chittenden County Transit Authority] management’s last proposal. That’s why it was voted down in such a big way.” Over the last few decades, 85 percent of transit authorities have pushed drivers to accept part-time conditions.

Slingerland’s schedule, for example, has him working from 6:50 AM to 9 AM, then from 2:20 PM to 7:20 PM. So he is paid for only seven hours’ work, but “my day’s total spread is 12.5 hours,” he said. “The contract says we can be forced up to a 15-hour spread. Because of that, they’re telling us we have to be available for that 15 hours but only being paid for the hours worked.”

“These sound like workplace issues from 1914, not 2014,” said Denise Youngblood, president of the faculty union at the University of Vermont.

“The Last Ones Thought Of”

A packed March 6 Burlington City Hall public forum saw the emergence of powerful new bus driver allies, who discussed the importance of this struggle in a burgeoning “antiunion context,” nationally.

Management is “asserting control over a person’s day, stretching it in a way that they are no longer comfortable, so that you can cut other full-time workers outside the vision of people watching the contract,” said State Senator Philip Baruth. CCTA’s “management is walking us down the road to something like eventually what you would see in Wisconsin of today, rather than Wisconsin of 20 or 30 years ago.”

Progressive Party statewide chair Emma Mulvaney-Stanak said the role of local leaders used to be one of “standing up for the entire community.” Mulvaney-Stanak has been “really disappointed – and I’m saying it nicely – about the Mayor of Burlington not taking more of a formal stand in this struggle.”

“There is something seriously wrong with how CCTA runs,” said Mulvaney-Stanak, reading a statement from her party. “For months management has persisted in pursuing a bargaining agenda that disregards the drivers’ justified concerns for livable jobs, dignified working conditions and safety,”

In its 41 years, CCTA has seen multiple expansions of routes, a $3.1-million investment in new buses in 2008, and a $3.3-million investment in new buses equipped with Wi-Fi in 2012. It has advocated for construction of a $15 million downtown transit hub and a $10 million bus station. According to its own figures, ridership has grown by 63 percent. Its mission describes it as “enhanc[ing] the quality of life for all.”

But the drivers are “the last ones being thought of,” said State Senator Ginny Lyons in an interview. “You can’t have capital expansion, increasing infrastructure, more buses, without carefully ensuring each step of the way you have money for operations, and that means drivers.”

“Every day we put the lives of our friends and families and ourselves in their hands,” said Burlington City Councilor Rachel Siegel. “Is it just to ask a driver to go without a bathroom break and end up urinating in their pants? Is it just to ask workers to drive to the point of fatigue and accidents? Do we need to wait for a tragedy before we take action? I hope not.” 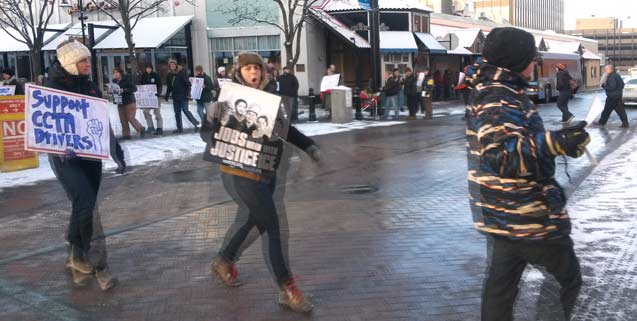 UE (United Electrical) union members were one of many unions represented as part of a large informational picket of CCTA’s Cherry Street bus station in 13-degree temperatures. (Photo: Jonathan Leavitt)

To create enough counterveiling pressure to win a fair contract, organizers have distributed hundreds and hundreds of “CCTA Fair Contract Now” lawn signs. Despite 13 degree temperatures, a spirited 7 AM informational picket drawing 50 unionized nurses, co-op workers, home care workers, professors, and workers’ center members chanted and even repurposed a childhood song to illustrate the degree to which, “The drivers make the bus go round and round, round and round, round and round.” Management found these concerned community members, engaged in protected speech while standing on public sidewalks, so threatening they called the police.

In this movement-building context, Slingerland described his commitment to his fellow drivers in almost Steinbeck-like terms: “Somebody had to give me this gut feeling; now I’ve got to give it to somebody. As long as you keep it so you’re getting one person at a time, you’re still moving forward. When a [contract] campaign does come around, people will come to you, because you’ve been there all along.”

Running the Union From Below

The drivers’ rank-and-file contract campaign, with a strong emphasis on community solidarity, marks the turning of a page.

In 2009 a group of CCTA drivers formed the Sunday Morning Breakfast Club as an informal caucus. The caucus, which aimed to change Local 597’s top-down, bureaucratic culture, got advice and support from Teamsters for a Democratic Union. Its members formed an activist core that has mobilized very successfully to win the right to elect stewards (previously appointed) and to open up bargaining to drivers.

Locally “there were two things going on,” says former driver Chuck Norris-Brown: “the actual Teamster meetings with the local and the Sunday Morning Breakfast Club.”

Since then, Slingerland says, Local 597’s current assistant business agent, Tony St. Hilaire, has embraced the reform caucus. St. Hilaire has come to the Breakfast Club to hear members’ issues and share food. In one such meeting, St. Hilaire said, “I want to know where the drivers want to go next.” Chief Steward Mike Walker, one of the Sunday Breakfast Club members, is on the bargaining team. During heated 2011 contract talks with CCTA, St. Hilaire told drivers that if they were frustrated, they should signal to him and they would all walk away from the table together.

Building Power to Protect a Community’s Rights and Safety

Walker, a 20-year bus driver and steward, has been fired three times for his organizing, and reinstated. He described a climate of fear and retaliatory firings.

For instance, he saw “a 30-year employee get let out the door because she got ill, it took longer for her to heal than it was supposed to, and CCTA just said, ‘see you later,’ ” Walker said. The best defense against such abuses and retalitory firings is “people exercising their rights as a union” and the community practicing solidarity.

The National Highway Traffic Safety Administration reports that driver fatigue is a leading cause of accidents, resulting in 100,000 crashes, 1,550 deaths and 71,000 injuries annually. When such crashes are the result of employers’ practices, those employers may be saving money by refusing to hire a full staff and then mandating overtime – and shifting the cost onto the rest of society. The agency tallies the annual cost of these fatalities, injuries, reduced productivity and property loss at $12.5 billion.

“Nothing could be more distracting,” said Senator Lyons than, “to be tired on the job or be completely deadened and having to continue driving for such a long time. We work hard to ensure we have safe workplaces, and this doesn’t sound like it is one.”

On Sundays at the Vermont Workers’ Center bus drivers have been coming together with a coalition of other unions and concerned bus riders. After providing solidarity for St Michael’s College janitors, the group now counts those janitors among its leaders.

“The CCTA drivers have helped the custodians’ union at Saint Mike’s from the beginning,” said custodian Graham Lebel. “When two of our organizers got fired, CCTA drivers were there. We plan to fully support them in their effort to get a fair contract.” The groups have been at each other’s rallies, strategy meetings and public statements.

Nurse Cory Mallon, a Workers’ Center leader, was one of many union activists who attended the bus terminal picket. Mallon described the connections between public health and public transport. “As our social support systems come increasingly under attack, public servants like drivers and front-line healthcare workers absorb much of the impact,” he said.

A similar community solidarity coalition helped nurses win their union in 2002, pass Act 48 establishing Vermont’s path to single-payer healthcare in 2010, and prevent the privatization of a regional hospital’s dialysis unit in 2011.

During the City Hall forum Heather McGrath, a teacher and union steward, read an open letter from three Vermont NEA presidents of Chittenden County locals, critiquing Burlington School Board discussions about hiring strike-breaking drivers. “If you choose to take this action, the Burlington School Board will not help to bring resolution to the contract crisis,” Mcgrath said. “Instead, you will be taking steps that would extend the crisis by taking work away from hard working CCTA bus drivers, who are exercising their legal and democratic right to refuse to work over a labor dispute.”

Subsequently the Burlington School Board voted overwhelmingly, in the event of a strike, not to hire drivers to cross picket lines. “Many members of the board voted this way,” said Henry Prine, high school school board representative, “because they wanted to show support to our local city bus drivers and not to hire scab drivers. Hopefully this will put additional pressure on CCTA management to agree to a fair contract.”

Prine, and nine other Burlington high school students, speaking before City Council detailed how they gathered 500 student signatures – half the high school enrollment – in a single day. In the name of ensuring “the safety of students and the public” the student petiton criticized CCTA Management for being “irresponsible” in “provok[ing] a drivers’ strike that would make it difﬁcult or impossible for many students to get to school.” 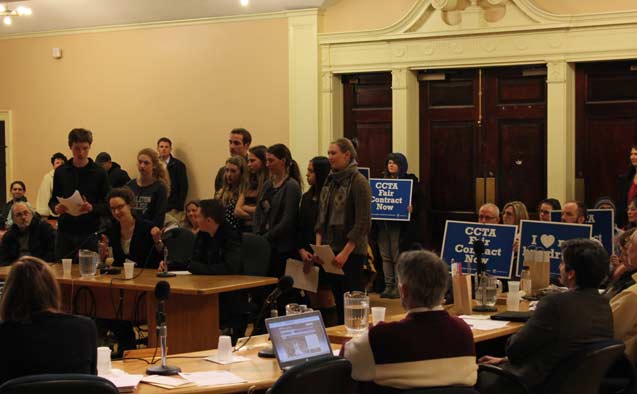 For the Green Mountain State, with its much ballyhooed social justice reputation and sense of community, this strike represents a critical test of Vermont residents’ values; a chance to lead the country beyond transactional greenwashed, consumeristic relationships (and their attendent hidden, in plain sight, labor abuses) and build social relationships with dignity and justice.

Slingerland said even the mechanics, who are also members of Local 597 but in a separate bargaining unit, have gotten strike benefits approved by their union leadership, “so they don’t have to cross our picket lines.”

“I look at the different unions, all the different unions, as a single entity,” said Slingerland. “You get everybody in each union shop together in the same way, and that’s a rock-solid community. The more you have that, the sooner the man doesn’t have all five fingers on the hammer and people start getting what they deserve.”

Share
Copyright, Truthout. May not be reprinted without permission.
Jonathan Leavitt