Life in the Calais refugee camp in France — commonly known as the “Jungle” — was already volatile before Brexit. In March, the French government began demolishing both the Calais and Dunkirk refugee camps. In response, many refugees in Calais protested via an extreme hunger strike in which some participants sewed their mouths shut. Now, post-Brexit, as refugees in Calais anticipate dramatic changes in the relations between the United Kingdom and the rest of Europe, refugees in the Jungle need more support than ever.

Both the Calais and Dunkirk refugee camps in France exist due to the overwhelming number of refugees from around the world hoping to seek asylum in the United Kingdom. Both are major ferry ports to Dover, which is the nearest path to the United Kingdom from the European continent. Unfortunately for the refugees in France, the United Kingdom spends over £62 billion (and climbing) per year to keep refugees from entering the country, forcing more dangerous situations like stowaway crossings and human trafficking to occur. In the meantime, refugees are forced to live in unsafe conditions at the camps, hoping to cross the border by any means possible.

After demolishing the dwellings that families created, the French government created these detention-style crates in which to house the refugees. (Photo: S Francesca Po)

After the French government-implemented demolitions of both the Calais and Dunkirk refugee camps last March, thousands of displaced refugees were forced into asylum and detention-style housing in stacked shipping containers.

What most people do not know is that prior to the demolitions the camps, which had naturally evolved, were a far more comfortable situation than any of the “solutions” currently being offered. In general, they were a peaceful place of hope toward the end of a long and painful journey. Though not an ideal situation for any human being to live in, they were a place where people created proper communities, and where people cooperated in making the best of their heartbreaking situations.

The government-sanctioned alternative, on the other hand, is reminiscent of a concentration camp. Individuals are assigned a number to enter heavily policed, fenced-in, concrete zones and then housed in stacked shipping containers, each crammed with 12 strangers. They offer absolutely no privacy and their residents have no sense of what is to come next. Since spaces are assigned at random, individuals are unable to be housed with their friends and loved ones, depleting any potential for camaraderie and community.

Life After the Demolitions 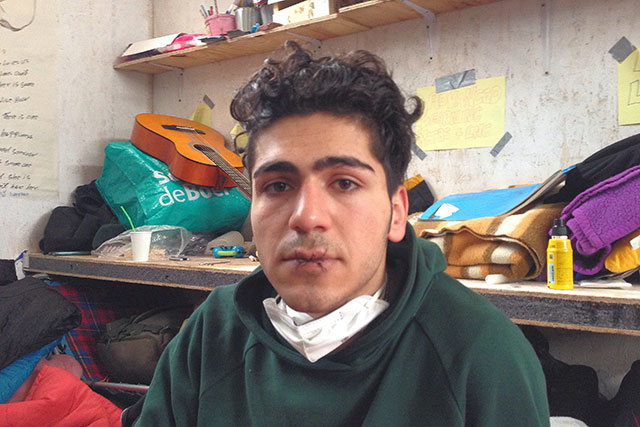 A hunger striker named Sasan sewed his mouth shut to protest the demolitions of the refugee camp in Calais. (Photo: S Francesca Po)

The government managed to demolish the entirety of the Dunkirk refugee camp back in March, but just as the Calais Jungle was about to be demolished, a group of refugees organized a hunger strike in protest.

A group of brave men even sewed their mouths shut in a powerful effort to demonstrate their commitment to the cause. They had suffered through so much — both in their home countries and throughout their entire journeys — only to have their rights stripped yet again, just as they finally felt close to refuge.

The strikers managed to negotiate with the French government, which has at least temporarily ended the demolitions. In the meantime, the Jungle only stands at about a quarter of what it originally was. Shelters originally built for sleeping two are now packed with five people each, and some people are losing hope.

In the meantime, there have been rumours that the refugee camps in France could be moved to Dover after all, and that the British government may take direct responsibility for the Calais refugee situation. But at the moment, these are mere rumours and even if it were to happen, it would not happen until years along the line. However, because word has already been spreading, many supporters of Calais refugees — predominantly independent activists and charitable organisations — have suspended their efforts to provide humanitarian aid, believing the falsely propagated changes to come.

Today, the needs in the Jungle — which houses over 6,000 refugees and rising — are more desperate than they ever have been. There are more tensions between individuals and groups due to the lack of sufficient living space and it has led to an increase in violence. Charitable organizations are having trouble coping with the demands for food, labor and energy supplies. Food distribution is now sometimes cancelled due to a lack of donations and supplies.

The situation in Calais is controversial and complex, but there are thousands of human beings there who need international support and solidarity now more than ever. We must all exert what political pressure we can to demand increased support for the refugees in Calais.

Share
Copyright, Truthout. May not be reprinted without permission.
S Francesca Po

S Francesca Po is a doctoral student at the University of Oxford. She is a member of the Strategic Advisory Council and liaison to wisdom traditions for the Metta Centre for Nonviolence.