Outside groups mobilizing in support of President Trump have already spent tens of millions on his behalf — and may never have to reveal where they got the money.

Trump’s unprecedented move to register as a candidate for the 2020 presidential election on his first day in office blurs the line between groups spending in support of the president’s agenda and those supporting his re-election. Unlike their forerunner, Organizing for Action, which did not exist as a 501(c)(4) until after President Barack Obama’s re-election in 2012, political nonprofits have been active since the onset of President Trump’s first term as he’s taken on the roles of both candidate and president.

Groups like the 45 Committee that were established during the 2016 election have spent multiple millions of dollars on ad campaigns during Trump’s first 100 days in office. Trump’s supporters also include new names like Great America Alliance and Making America Great, whose operations and funding sources are still largely opaque though they’ve spent plenty backing Trump; they will not have to file reports with the IRS until next year, and even then won’t have to publicly name their donors — just some of the benefits of the 501(c) tax status.

The nonprofits have publicly jostled to be the Trumpian counterpart to Obama’s OFA; but these groups have much more in common with each other — and the “swamp” of political insiders his campaign promised to “drain” — than initially meets the eye.

For instance, despite holding itself out as a “new” nonprofit launched to support President Trump’s agenda, records show Great America Alliance is actually a refurbished 501(c)(4) that has been around since 2013. An IRS Exempt Organizations Division official confirmed that Great America Alliance was once known as the American Dream Initiative (ADI), a politically active nonprofit with a history of spending undisclosed “dark money” in politics under the guise of issue advocacy.

A Page From Rove’s Playbook

Great America Alliance is not the first politically active nonprofit crafted from the carcass of another group. Notably, the operatives behind dark money behemoth Crossroads GPS appropriated an existing 501(c)(4) and rebranded it: It’s now One Nation. Tax lawyers have speculated that this strategy can expedite the IRS approval process for tax-exempt status, which took Crossroads GPS over five years.

ADI’s Form 990 from 2014 shows the group paid over $500,000 — more than 83% of its total spending in 2014, though it’s supposed to spend less than half its funds on political activities — to OnMessage Inc. for “media buy and production” of an ad attacking a candidate for Texas attorney general that ran just before a runoff election in that race. OnMessage was paid by over 40 political campaigns, outside groups, and party committees supporting conservative candidates or agendas in each of the last three election cycles. However, only two other nonprofit organizations in the Center for Responsive Politics’ comprehensive database of 501(c)(4) social welfare organizations, 501(c)(5) labor unions, and 501(c)(6) trade groups filing tax returns with the IRS in recent years reported paying OnMessage Inc: the Republican Governors Public Policy Committee in 2011 and American Future Fund in 2010, which also came under scrutiny for skirting restrictions on political spending.

ADI reported no political activity to the IRS in 2014 and only an unusual $1 political contribution the following year to “Grassroots Victory” with an address at the same location as ADI itself. In 2016, the liberal watchdog group Citizens for Responsibility and Ethics in Washington filed both a federal criminal complaint and an IRS complaint against ADI and 10 other “social welfare” groups; CREW called for the FBI to investigate whether the groups violated their nonprofit status by acting as political organizations or significantly underreporting their political activity.

After the Texas attorney general race in 2014, ADI appeared to go dormant. Then it got a fresh coat of paint in 2016 for its quiet rollout as Great America Alliance.

The super PAC mistakenly published emails and cell phone numbers of hundreds of donors, became caught up in a fundraising scandal for attempting to funnel money from a foreign donor into the US presidential election, and parted ways with a political operative convicted of falsifying campaign records in a prior election. Blasted as a “big-league scam,” Great America PAC was accused by many of being a scam PAC. Nevertheless, the group raised over $28 million during the 2016 cycle and spent over $26 million. Great America PAC paid more than $4 million to Beach’s firm, Frontline Strategies and Media, making the PAC the firm’s top-paying client that cycle.

In 2014, ADI reported raising $600,000 from a fundraising campaign using in-person solicitation conducted by Frontline. The same year, ADI received $250,000 from Judicial Crisis Network and $350,000 from Wellspring. Frontline Strategy’s $600,000 fundraising push — which matches the total amount donated by the Wellspring and Judicial Crisis Network — accounts for more than 90% of ADI’s revenue of $652,829 in 2014.

Great America Alliance is in good company with other 501(c)(4) nonprofits mobilizing for Trump’s agenda that also have financial ties to “dark money” groups that have gained notoriety over the years. Wellspring has bankrolled other groups with deep connections to the Trump administration as well, funneling $750,000 to 45 Committee and $100,000 to “AR2 Inc.,” the 501(c)(4) arm of the GOP “America Rising” network of opposition research groups. Although the groups appear to be disjointed and often even in competition with each other, the network of politically active nonprofits supporting Trump’s agenda share common vendors, staff, consultants, and funding sources. 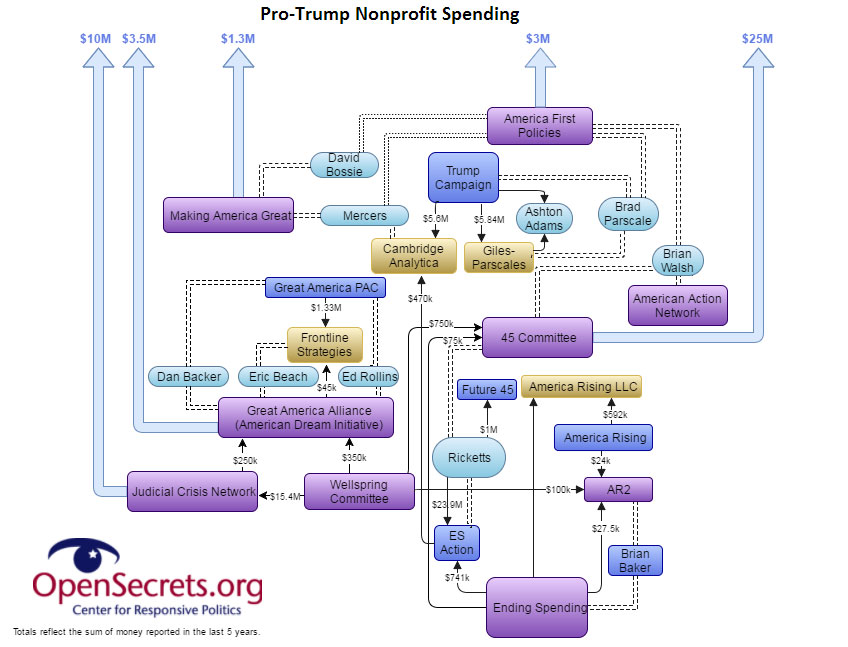 Much of this can be traced to two influential families of mega-donors: the Ricketts and the Mercers. Beyond just the money they bring to the table, members of each family have taken strategic roles in nonprofits as well as firms those groups hire.

Todd Ricketts, who recently withdrew from consideration to be deputy secretary of Commerce due to the difficulty of disentangling himself from his business interests, has been a key player in “dark money” operations for years. In 2012, he took over a 501(c)(4) nonprofit called Ending Spending as well as its super PAC arm, ESA Fund, formerly Ending Spending Action Fund, which were started by his father and fellow mega-donor Joe Ricketts. The super PAC spent more than $15 million in the 2016 cycle, and Ending Spending itself reported spending over $2.6 million. Because Ending Spending ran “issue” ads that most of the time need not be reported to the FEC despite being almost indistinguishable from direct advocacy, the total amount spent remains unknown but is likely much higher. Its donors may never be known.

The Ricketts also helmed the 45Committee and Future45, which spent over $40 million in the 2016 election. 45Committee, another 501(c)(4), has continued spending to praise Trump’s nominees and policies, and has invested in other federal races. The family’s flip to support Trump has been startling: During his campaign, Trump threatened to expose the Ricketts’ family secrets after Joe and Marlene Ricketts gave more than $5.5 million to Our Principles PAC, which opposed Trump.

Unlike the Ricketts, the Mercers kept a lower profile — until recently. Robert Mercer and his wife Diane are in the top 20 individual donors at the federal political level, which the Ricketts are as well. However, the Mercers’ contribution patterns are more line with their reported rejection of the GOP establishment.

Although the Mercers originally spent millions backing Sen. Ted Cruz (Texas) in the 2016 Republican presidential primaries, when Cruz suspended his campaign they quickly directed their super PAC to support Trump, becoming among the first major donors on the “Trump train.” Ultimately they spent around $20 million on behalf of Trump. The Mercers also leveraged the power of Cambridge Analytica, a firm that uses secret psychological methods to more effectively influence voters, to help the Republican nominee. The Mercers are investors in the firm.

As alliances continue to shift between factions, this tangled web of groups churning money from secret donors into the pockets of consultants doesn’t appear to be draining the swamp. Seems more like everyone’s dived in.