Hours worked fell by 3.8 percent over the decade. 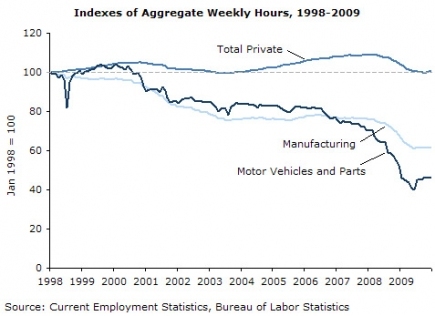 The economy lost another 85,000 jobs in December, driven by continued job losses in construction and manufacturing. While the current data still show a 378,000 job gain for the decade, these numbers will be lowered by approximately 824,000 when the benchmark revision is incorporated into the data with the release of the January employment report. The data show a decline in private sector jobs of 1,549,000 for the decade. The benchmark revision will increase the private sector job loss for the decade to more than 2.4 million.

The index for hours worked shows an even more dismal story. Hours worked are down 3.8 percent for the decade, even before the benchmark revision.

While some analysts had expected a smaller job loss or even a small gain in December, that would have been inconsistent with the recent level of unemployment insurance (UI) claims. UI claims have fallen sharply, but are still averaging over 440,000 a week. The economy did not begin to generate jobs after the last downturn until UI claims had fallen below 400,000 a week. Interestingly, a downward revision to the October jobs numbers led to a reported 4,000 increase in November employment. It remains to be seen whether this will hold up in subsequent revisions, but the difference between a small job gain and small job loss is irrelevant for all practical purposes.

Manufacturing shed 27,000 jobs with the declines spread widely across sectors. The rate of job loss in manufacturing is slowing. Manufacturing employment is likely to level off and possibly even start growing modestly in the next few months.

Retail trade lost 10,200 jobs, all of them in general merchandise stores. It is likely that job losses will continue in this sector, especially in car dealerships, but at a modest pace. The wholesale trade, transportation, and information sectors lost 18,200, 8,000, and 6,000 jobs, respectively.

Health care continues to be a big job gainer, adding 21,500 jobs. The private education sector added 10,800 jobs and the banks are again increasing employment. One bright spot is an increase of 55,700 jobs in employment services. This continues an uptick of employment in this sector and could be a harbinger of future growth in permanent employment.

The EPOP for blacks fell by 0.6 percentage points, with black women seeing a 1.2 percentage-point decline. The EPOP for black women is now a full percentage point lower than for white women, reversing a longstanding pattern of higher EPOPs for black women. The EPOP for Hispanics also fell sharply, dropping 0.7 percentage points in December. By education, those without a high school degree were hit hardest, with a 0.7 percentage-point decline in their EPOP. Older workers continued to hold their own, as employment among people over age 55 remained constant, as an increase in 40,000 jobs among older women offset a decline of the same amount among men. All the duration measures hit new records, with the share of long-term unemployed now at 39.8 percent.

This report is consistent with a picture of an economy that is still experiencing job loss, albeit at a much slower rate. Job loss is likely to continue into the first few months of 2010, although even when it turns positive, it is not likely to be fast enough to bring down the unemployment rate.