This blog will feature Truthout's live coverage of the Occupy movement's national day of protest today. Our editors will be summarizing news from around the country. Matt Renner (Truthout's Director of Development and Communications) will be on the ground in New York City, participating in and tweeting from the New York protests.

The Oregonian, 3:08 p.m. Eastern: “Group gathered on Standard Insurance Center stairs, 900 SW Fifth Avenue. Clogging the stairs leading to the center. Flanked by bicycle cops and vans packed with riot police and cops on horseback. They’ve raised a banner on the street.”

The Oregonian, 1:45 p.m. Eastern: Sign on front door of downtown branch of Chase bank: “Due to Occupy Portland, the building has been locked down until further notice.”

The Nation, 1:00 p.m.: “About 20 arrests in LA, as planned after big march. They plan to re-group in an hour or two. In NYC, amid rain now, plan to show up at 16 subway stops at 3, legal massive rally at Foley Sq at 5 and then some sort of march to Bklyn Bridge and more.”

Los Angeles Times: Protesters in the Occupy Wall Street movement seized a Bank of America branch in the city's financial district Wednesday, a demonstration that forced jittery customers and employees to flee and ended in nearly 100 arrests.

New York Daily News, 12:42 p.m.: NYPD shut down the street and the sidewalk between Rector and Wall. For thirty minutes they pinned protesters and media on the sidewalk in a two block radius. At each side of the barricade, NYPD instructed protesters to walk to the other side – where they were promptly told the same thing.

Glenn Greenwald: “The reason the U.S. has para-militarized its police forces is precisely to control this type of domestic unrest, and it’s simply impossible to imagine its not being deployed in full against a growing protest movement aimed at grossly and corruptly unequal resource distribution.” 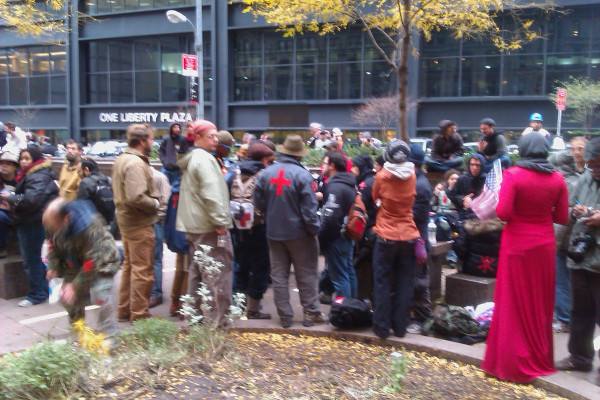 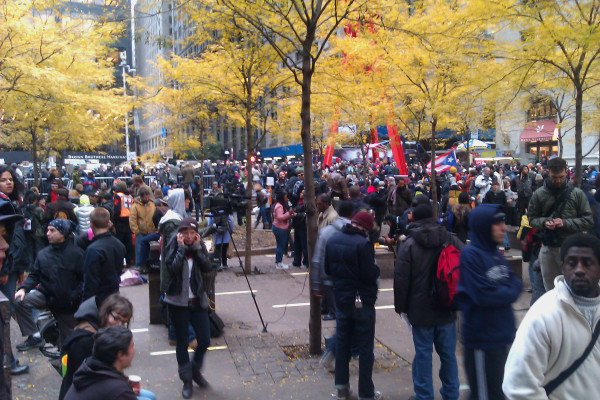 Manhattan Borough President Scott Stringer Slams Mayor Bloomberg: “American foreign correspondents routinely put themselves in harm’s way to do their jobs, in some of the most brutal dictatorships in the world. And their NYC colleagues deserve the freedom to make the same choice. Zuccotti Park is not Tiananmen Square.”

New York Times, 11:28 a.m.: Hundreds of protesters from Zuccotti Park clashed with the police as they tried to reach the New York Stock Exchange on Thursday morning, and at least 75 were arrested, the police said.

The marchers then returned to the park, where they yanked out barricades that had been placed there on Tuesday in order to create single-file entrances. Maybe a thousand protesters streamed into the park, followed by officers who began making arrests. Officers could be seen grabbing and punching protesters and journalists.

New York Daily News, 11:17 a.m.: At Zuccotti it has all the feel of a strange family reunion. Protesters are embracing each other and exchanging kind words. Many are dancing and singing. 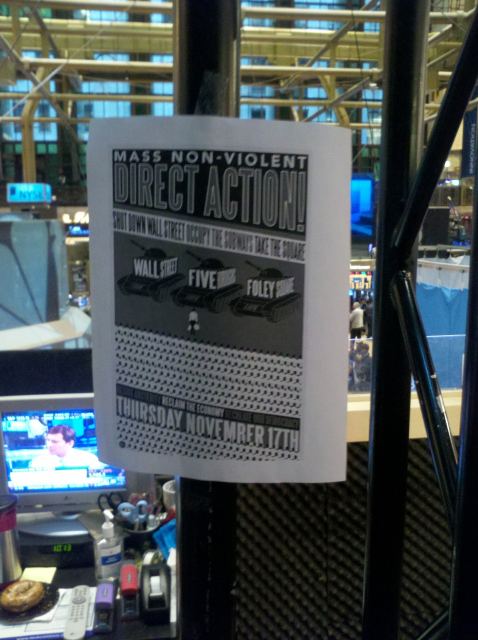 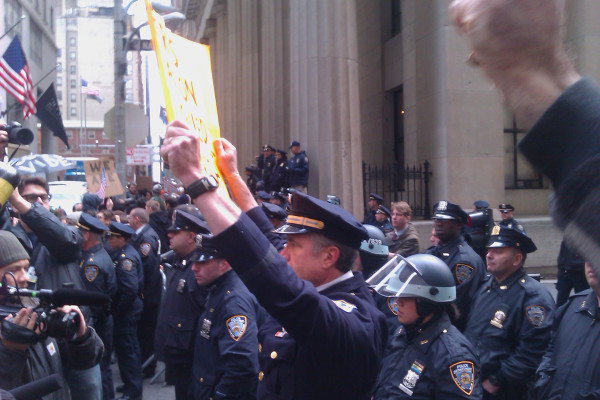 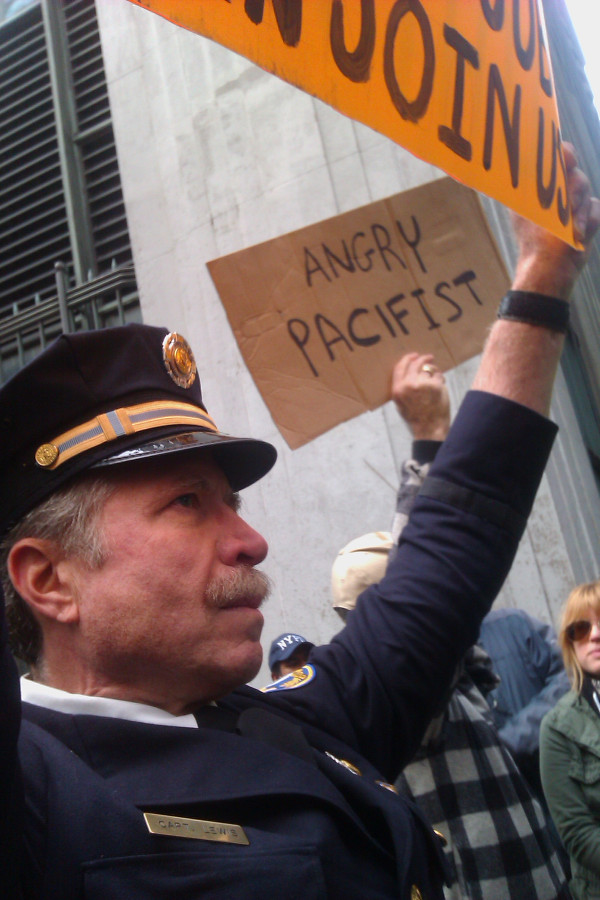 New York Daily News, 10:45 a.m.: The NYPD is bringing a bunch of the arrested protesters to the area outside the New York Stock Exchange on Broad and Wall. Workers are still able to get to work: subways are open and sidewalks are open. However, the area is still only open to people who live and work in the vicinity.

The arrestees are being loaded onto a bus right outside the Stock Exchange. One man being led away in cuffs just shouted “We'll be back, Stock Exchange”.

Greg Sargent: Newsflash: Americans agree with Occupy Wall Street’s message. There was a good deal of crowing in some quarters yesterday about a new poll showing support dropping for Occupy Wall Street. And there’s no sugar coating the fact that the movement should be very concerned about its image and direction.

But a new poll today from the Public Religion Research Institute suggests something that national Dems should not lose sight of as the battle over Occupy Wall Street’s meaning continues: Americans agree with the basic critique of the system embodied by the movement.

From Think Progress: “Today, activists across the country plan to stage demonstrations in solidarity with Zuccotti Park’s evicted protesters. Early this morning, hundreds of demonstrators are marching on Wall Street, taking over the Financial District with mass protests. Police have moved in and started to arrest many of the demonstrators, who are blocking Wall Street employees from getting to work and shutting down intersections.” 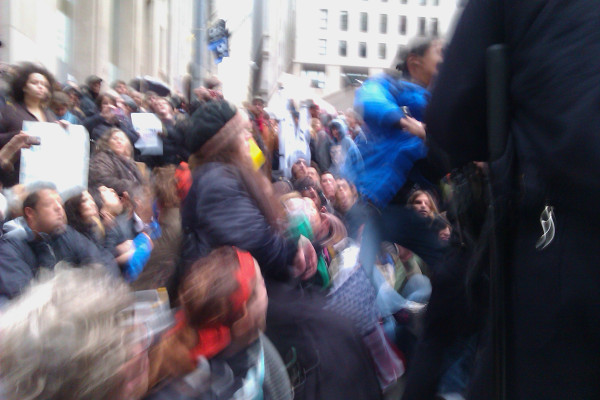 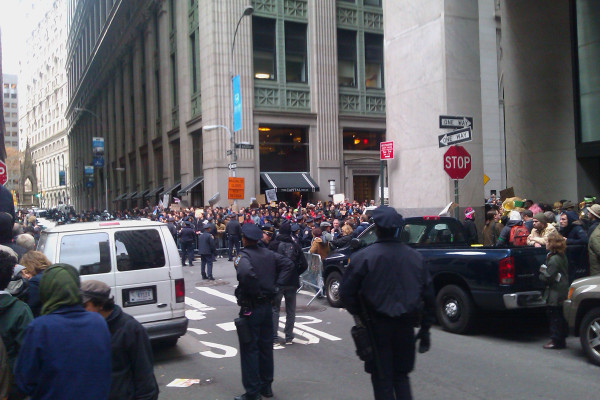