It’s been 24 long years since Congress first designated the desert locale in southern Nevada as the best place to store the nation’s nuclear waste.

While opponents have gained the upper hand in trying to block the project in recent years — in 2009, Energy Secretary Steven Chu said that “Yucca Mountain as a repository is off the table” — a group of House Republicans is fighting back. They want to revive the site as part of a broader plan that calls for building 200 new nuclear plants by 2030. 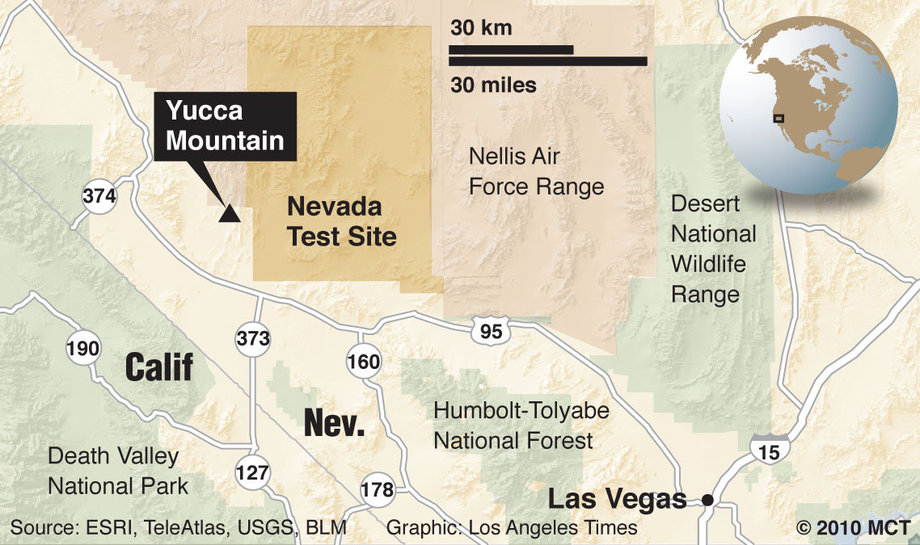 Under that plan, the nation would begin building nuclear plants on an unprecedented scale: Currently, the nation gets 20 percent of its electricity from 104 nuclear reactors.

But there’s one big problem: There’s no place to put the waste.

The Republican legislation would take care of that. It would require the Nuclear Regulatory Commission to complete its review of the Yucca Mountain site “without political interference.”

That would be difficult, with top Democrats trying hard to scrap the project.

In a speech to the Nevada legislature last month, Senate Majority Leader Harry Reid of Nevada boasted that Congress had “killed Yucca Mountain” because of fears it would hurt the state’s tourism industry.

And President Barack Obama, who campaigned against the proposed repository in 2008, has included no money for Yucca Mountain in his 2012 budget.

Obama, though, has become a fan of nuclear power, reflecting how much things have changed since the “no-nukes” days of the 1970s. He regards nuclear power as an important part of his push for “clean energy.”

And nuclear power is moving up on the agenda on Capitol Hill after the president talked it up in his State of the Union speech. Since then, Republicans have repeatedly cited nuclear power as an issue that could result in their cooperation with the White House.

The president promoted the issue again last month in his 2012 budget, which called for spending another $36 billion on loan guarantees to help build more nuclear plants. The guarantees could save power companies billions in financing costs.

However, the nuclear risk rising from Japan’s Friday earthquake is likely to revive anti-nuclear power sentiments in this country, and could tilt political momentum against the radioactive power source.

Senate Homeland Security Committee Chairman Joe Lieberman (I-Conn.) said Sunday on CBS News’ “Face the Nation” that he’s been a “big supporter” of nuclear power and that the U.S. has “got a good safety record.” But he said the tragedy in Japan requires the U.S. to take care before proceeding.

“I think it calls on us here in the U.S. naturally not to stop building nuclear power plants but to put the brakes on right now until we understand the ramifications of what’s happened in Japan,” Lieberman said.

Still, for now House Republicans have upped the ante, with a group of 64 signing onto the bill that would triple the nation’s nuclear capacity in 19 years. The legislation also promises to reignite an old battle by calling for energy exploration in Alaska’s Arctic National Wildlife Refuge.

The issue is of particular importance for a number of states with complexes that built nuclear weapons during World War II and the Cold War and are currently storing large amounts of radioactive waste, including:

Washington state and South Carolina sued the Obama administration in April 2010, claiming the Department of Energy had no right to junk the Yucca Mountain plan. The project calls for digging deep tunnels into mountainsides, about 90 miles northwest of Las Vegas, where high-level nuclear waste could be stored and buried for 10,000 years as it decays.

“There’s a fundamental issue here, and that is Yucca Mountain was created statutorily,” said Republican Rep. Doc Hastings, the chairman of the House Natural Resources Committee, whose western Washington district includes the Hanford Nuclear Reservation. “No executive, I don’t care which party he is, can unilaterally say, ‘I don’t want to carry out the law.’ And that’s precisely what this president is saying.”

It’s not only Republicans who are complaining.

Rep. Norm Dicks of Washington state, the top-ranking Democrat on the House Appropriations Committee, said the Yucca Mountain project “is being stopped without Congress changing the law.”

“I think it’s a travesty, and we’re wasting billions of dollars,” Dicks said.

South Carolina Republican Sen. Lindsey Graham, one of the Senate’s strongest supporters of nuclear energy, said the president’s decision to close Yucca Mountain “was ill-advised and leaves our nation without a disposal plan for spent nuclear fuel or Cold War waste.”

“It was a political, not scientific, decision,” Graham said. “It is incumbent on the administration to come up with a disposal plan for this real problem facing our nation.”

The White House and its allies contend that the administration has the power to stop the Yucca Mountain project after concluding the site was not a workable option.

During a debate on the House floor, Nevada Republican Rep. Dean Heller told his colleagues that the Yucca project is dead and that it was time to “acknowledge reality” and find a new site.

“Yucca Mountain is in my district, and our state has been dealing with this boondoggle project literally for decades. … I continue to be disappointed at the House’s insistence of reviving the Yucca Mountain boondoggle,” Heller said.

But Hastings and other Republicans said the House will continue to provide funding for Yucca Mountain in their budgets.

“We’re going to continue to fight the administration’s position and we have the goal of opening Yucca Mountain,” said Republican Rep. Cathy McMorris Rodgers of Washington state, whose district borders Hastings’.

In the Senate, the issue has divided leadership along parochial lines, with Washington state Democrat Patty Murray, who ranks fourth in power, opposing Reid.

Congress chose Yucca Mountain as the sole repository in 1987, after a search had been narrowed to three locations: Yucca; Hanford, which began producing plutonium for nuclear weapons during World War II; and Deaf Smith County, in the Texas Panhandle. In Washington state, some fear that Hanford could again emerge as Plan B if Yucca is scuttled for good.

Backers of the Yucca plan note that the government’s failure to build the repository has been costly, leading to more than 70 lawsuits filed by utilities against the government, $1 billion in settlements being paid, and roughly $16.2 billion in potential liabilities to settle the remaining cases.

And Republican proponents said their plan to build another 200 power plants would be good for the economy, creating 480,000 construction jobs and 140,000 permanent jobs, while adding $20 billion a year in local, state and federal tax collections.