There are 4,063,853 registered Republicans in Florida. But they are not spaced uniformly throughout the state, and they are not homogeneous demographically or ideologically. Florida’s Republican primary electorate is much more diverse than Iowa’s, New Hampshire’s or South Carolina’s.

What follows is a basic guide to Florida’s political geography. To help FiveThirtyEight get the lay of the land, we reached out to several people with experience in Florida politics, including Steve Schale, a longtime Democratic political strategist in Florida who ran the 2008 Obama/Biden campaign in the state; Susan MacManus, a distinguished professor in the University of South Florida’s Department of Government and International Affairs; and David Johnson, a former executive director of the Florida Republican Party who worked on Jon M. Huntsman Jr.’s campaign.

Florida has 10 media markets, which have widely varying shares of the state’s registered Republicans: 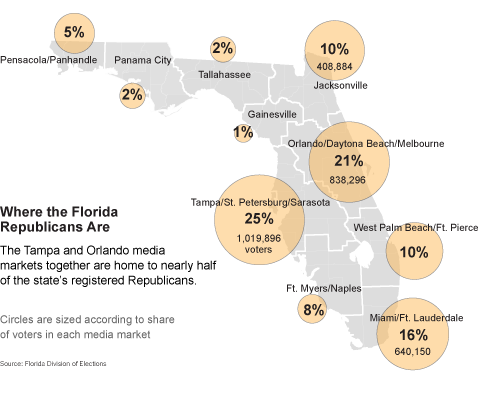 The bulk of Republican voters in Florida live in the I-4 corridor, which covers two media markets, Tampa/St. Petersburg/Sarasota and Orlando/Daytona Beach/Melbourne. The Tampa market alone holds about a quarter of the state’s registered Republicans. John McCain won most I-4 corridor counties in 2008, but not by much — and Mitt Romney edged him out in a handful.

With such a large portion of the state’s Republicans, it can be hard to apply generalizations to the voters in this region. “There are economic conservatives, social conservatives, some Hispanics. It’s our melting pot,” Mr. Johnson said.

The Tampa market also includes a string of retirement communities scattered up and down the Gulf Coast, especially in Citrus County and Pasco County. The eastern part of Pasco County, however, is heavy with Tampa bedroom communities. The Tampa area also includes Polk County, which has some heavy industry like mining.

The Orlando market is similar to the Tampa area — and also has plenty of retirees including The Villages, an inland retirement community that has become almost a second home to most presidential aspirants. The Orlando area includes the Space Coast in north Brevard County.

The I-4 Corridor is usually a swing area in primaries and general elections and is considered the state’s bellwether. It might be possible to win Florida without winning the I-4 corridor, but it would not be easy. Indeed, if Mr. Romney is running up large margins in counties in the Tampa area (which usually are among the first to report their results), then it may be an early night for politicos.

Mr. Romney won two of Florida’s 10 media markets in 2008, and the Jacksonville market was one of them. Conflicting forces are at work in the Jacksonville area this year. On one hand, it might be a place where Newt Gingrich would be expected to do well: Republican voters here are more conservative and church attendance is high. On the other hand, it has many upper-income Republicans and white-collar retirees, among whom Mr. Romney’s business experience probably plays well. The Romney campaign has also had a presence in the area essentially since the 2008 election. If Mr. Gingrich does achieve what would be a significant upset, he would probably have to perform well in the region, where about 10 percent of the state’s Republicans live.

There is a saying in Florida that you travel north to go south and you travel south to go north. The first part of that aphorism refers to the Panhandle, which includes the Pensacola, Panama City and Tallahassee media markets. This area resembles the states that it borders, Alabama and Georgia. Panhandle Republicans are the state’s most socially conservative. The western Panhandle is dotted with military bases, and is home to a large contingent of active and retired military personnel. This is Gingrich and Rick Santorum country.

Unfortunately for those two campaigns, the area is not densely populated and constitutes just a small part of Florida’s registered Republicans, about 9 percent.

Hispanics make up about 11 percent of registered Republicans in Florida and more than two-thirds of them are in the Miami/Ft. Lauderdale media market.

The area leans Democratic, so Republican turnout is lower than one might expect — the media market holds only about 16 percent of the state’s registered Republicans, and they tend to turn out less reliably than those in other areas.

Still, it can play a decisive role in some Republican primaries, having given Mr. McCain much of his advantage in the state in 2008 because of his advantage with Hispanic voters. This year, Mr. Romney is polling well among Hispanics instead.

The Miami/Ft. Lauderdale media market also includes a significant number of Jewish voters. Statewide, Florida has nearly 640,000 Jewish residents according to the North American Jewish Data Bank, more than any other state except New York and California, and there are large Jewish communities in Miami-Dade and Broward Counties.

This population skews Democratic, but the Republican campaigns have been courting Jewish voters. All of the candidates except Ron Paul have taken a very hard line on Iran. And Mr. Gingrich accused Mr. Romney of cutting Medicaid money while he was governor that paid for kosher meals for seniors. And last week, Mr. Gingrich appeared at a Republican Jewish Coalition rally in Delray Beach, where some in attendance wore pins that read: “Obama, Oy Vey!”

Finally, Mr. Romney is expected to be a better fit for the region’s generally moderate-to-liberal views on social policy.

On the Gulf Coast lies the Ft. Myers/Naples media market, the other market that Mr. Romney won in 2008. It is home to many transplants from the Midwest, and Florida political strategists described it as somewhat moderate and Midwestern in its political outlook, with a fair mix of socially tolerant Rockefeller Republicans thrown in. Like the Tampa media market, this Gulf Coast area is also home to many retirees. This is also a region that was hit particularly hard when the housing bubble burst, especially areas like Cape Coral and Lehigh Acres.

On the Atlantic side, just below the Orlando area, lies the West Palm Beach/Ft. Pierce media market. If the Ft. Myers region is Midwestern, the West Palm Beach area is Northeastern, local strategists said, with transplants from New Jersey and New York.

The West Palm Beach media market is relatively diverse. For example, it includes the counties Indian River, St. Lucie and Martin. All three have sizable retiree populations, but Indian River and Martin are more wealthy, while St. Lucie is more working class. St. Lucie, in fact, has been trending more Democratic in recent years.

Still, the Tampa region is the most representative of the state and the first one to keep track of on Tuesday night. If Mr. Romney has a solid lead there, the networks may be more comfortable calling the state early. “As goes the Tampa media market so goes Florida,” said Mr. Schale.