When His Holiness Dalai Lama XIV visited Hawaii in mid-April to launch the Pillars of Peace Hawaii initiative, audiences rose in anticipation each time he shuffled onto stage, always surrounded by a retinue of attendants, hosts, security guards and his interpreter.

Smiling and bowing, his palms pressed together in respectful greeting, the Dalai Lama appeared just as he describes himself – a “simple Buddhist monk.” Dressed in his characteristic maroon robe with matching socks, yellow sash and slightly clunky brown shoes, wherever he went, the Dalai Lama was garlanded with various flower, leaf and shell lei.

Twice he was presented with Hawaiian handmade kapa (cloth bark) and, at the Bishop Museum, with a high-crested handmade Hawaiian mahiole crown made of wicker, a cultural nod to the distinctive yellow head wear worn by the Dalai Lama’s own Gelugpa “Yellow hat sect” of Buddhism. Famous for his unassuming demeanor, mischievous laugh and disarming wit, the Dalai Lama admired the Hawaiian chiefly crown before flipping it around on his head and announcing, “When on horse, then this way, more safer.”

Seated on a cushioned chair with potted orchids at his side, the 76-year-old Dalai Lama, embodied the earthly manifestation of Avalokiteshvara, Bodhisattva of Compassion, even while being thoroughly wired for electronic sound and wearing a maroon sun visor over his brow to shield his eyes from bright stage lights. 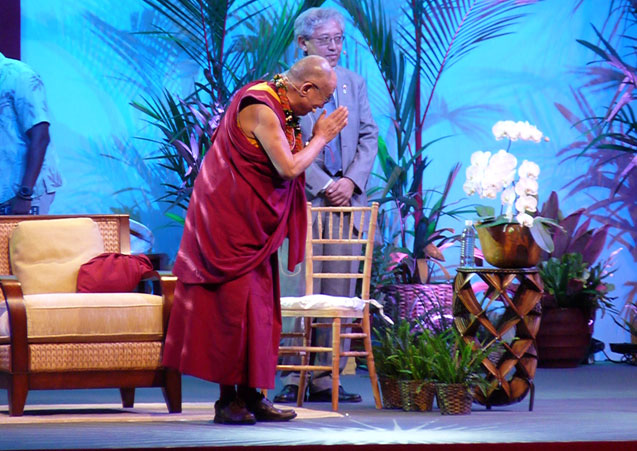 The Dalai Lama’s talks are punctuated with smiles and laughter – lots of laughter – first his, then that of those around him. He speaks with a thick accent, molded by half a century of living in India, in tones that plunge to low and earthy then soar to cat-screech high pitches, giving him at times, the sound of Yoda in “Star Wars.” He calls himself a “son of India,” having sustained his body on Indian rice, dahl and chapati for more than half his life.

In delivering his message of peace, tolerance and compassion, the Dalai Lama easily connects with his audience through revealing, often very personal stories of human frailty (like details of his own gall bladder operation). Whether recalling his own playful childhood habit of riding on his mother’s shoulders and steering her by the ears, or the lessons of appearance vs. reality learned by mischievously peeking into a medicine cabinet, the Dalai Lama speaks, by his own admission, in “broken English” aided by an interpreter, yet he is comfortable discussing secular ethics, Marxist philosophy and quantum physics in a foreign tongue.

Speaking in Honolulu on the theme “Advancing Peace through the Power of Aloha,” and “Educating the Heart,” a talk delivered to 9,000 high school and university students, the Dalai Lama is the great equalizer, addressing presidents and princes no differently than he does the lowest street sweeper. Everyone he encounters, he said, is like a brother or sister. “Mentally, emotionally, physically – same!” he said. “I am just one of you – no differences, no barriers.” 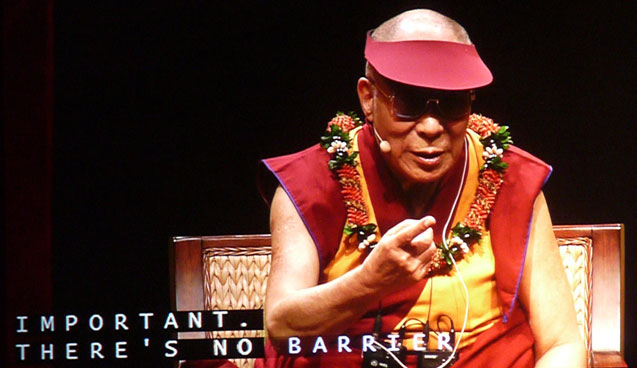 The image of the Dalai Lama projected on a large screen at the University of Hawaii where he spoke to students about peace, dialogue and secular ethics as part of the Pillars of Peace Hawaii initiative. (Photo: Jon Letman)

Speaking at ten public and private events over four days in Hawaii, the Dalai Lama interacted with some 20,000 people. Excerpts of his Pillars of Peace message follow:

(The Dalai Lama’s comments have been edited for clarity and length.)

On indigenous culture: Everywhere, indigenous people are determined to keep their own culture and their own language. I think most indigenous people’s live depended on nature in ancient times. Ancient people had a much closer relation with nature and respected nature. I feel it’s important that people in technologically developed nations should respect nature. Our survival depends on nature, so respect nature and protect nature, sometimes worship nature – it is good. You Hawaiians are taking a special effort to preserve your own language. That relationship is very essential to your culture in order to preserve relationship. Language is very essential in order to keep your culture alive. 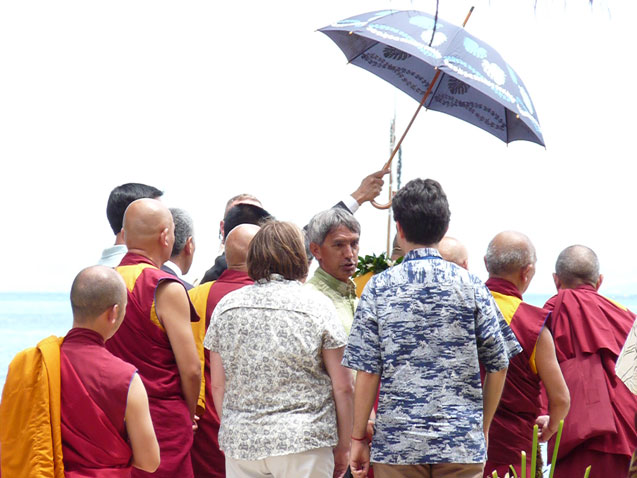 On loss: I lost my own country – there was a lot of destruction, a lot of suffering. However, with that tragedy, there were also some positive results. That tragedy opened Tibetan’s eyes – around six million Tibetan people. Before that, I think they closed their eyes; now, they’ve opened their eyes – good. Today, the entire Tibetan population, actually in five Chinese provinces – all Tibetans in these different places now really have a remarkable sort of feeling of unity there. This unity was brought by Chinese communists. So, this very sad event brought some positive result. If you look only at the negative side, then it’s sad, sad, sad. If you look from wider perspective, you can see some positive things.

Closely protected and escorted by his interpreter (grey suit, left), the Dalai Lama wears a Hawaii leaf lei during a visit to Kualoa Park on Oahu. (Photo: Jon Letman)

On education: The purpose of education is to reduce the gap between appearances and reality. Listen to different views – contradictory views. Read more books and analyze. Think for yourself.

On secular ethics: Corruption is the new cancer of the planet. Everywhere -in the east, west, north and south. The only medicine for that cancer is not religious faith – religious faith is wonderful – it always teaches us love, compassion, honesty, truthfulness – it’s wonderful. Now, the disease of corruption is something universal, so the countermeasure for that also should be universal. My thinking and also many of my friends agree or support secular ethics is not against religion; secular in the Indian tradition respects all religions including nonbelievers. So, that can be good also. 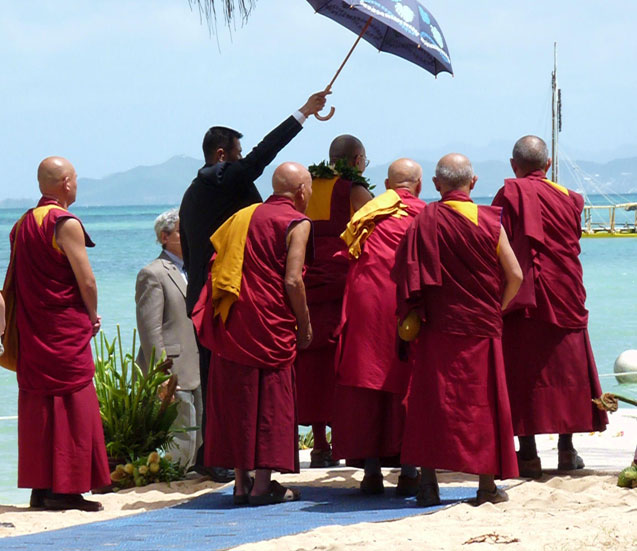 A group of five Tibetan Buddhist monks watch as the Dalai Lama blesses the Hawaiian voyaging canoe Hokulea on the final day of his four-day stay, part of a new initiative called Pillars of Peace Hawaii. (Photo: Jon Letman)

On fear and violence: I think among emotions or thoughts, the real destroyer is fear and distrust. Distrust eventually develops into fear. Fear develops into frustration. Frustration develops anger. Anger brings violence. I think that on a national level or even family level, whenever we face some problems, we often rely on the use of force. So, that reality is totally wrong. In appearance – yes, use force, sort them out. You win and destroy other. But in reality – no. If you can change a negative person through a nonviolent way, that’s real victory.

On militarism and war: America is a democratic country – of course, in spite of some drawbacks in America [laughs] – but basically, it’s a democratic country ruled by law, and every American citizen is free to express [themselves]. Compare these kind of military forces and different kind of military forces, I prefer this kind of military forces. Two years ago, I was in Okinawa where there are American military bases there. From a local viewpoint, locally, it is sad – American military forces remaining in one Japanese island Okinawa. It’s wrong – should remove. However, judging from the global level, then there is North Korea, a very militarized nation and very sick society, unpredictable. To some extent, China is a little better, but still it’s a totalitarian system and secret society. Like now, the South China Sea problem.

Eventually, I think all these big nations truly will come to live in genuine sense of brotherhood, sisterhood – with mutual trust, mutual respect; then, these military areas must be abolished. Until that situation happens on a global level, American military presence in these different areas I think is sometimes necessary.

The Dalai Lama continued, saying that once great global powers achieved mutual trust, respect and positive cooperation, militarism will then automatically disappear and should disappear.

(Watch this reporter ask the Dalai Lama about US militarism here.) 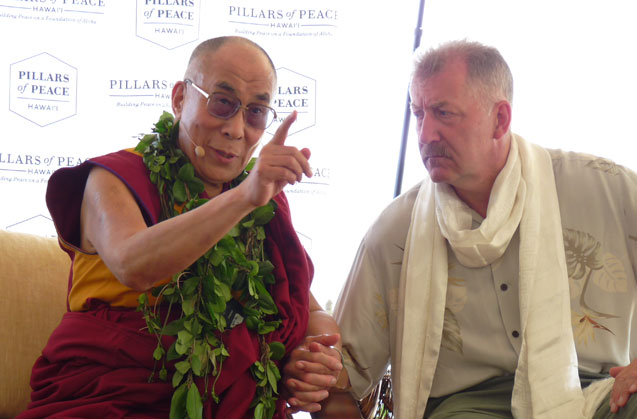 Hand in hand, Honolulu Mayor Peter Carlisle listens closely as the Dalai Lama answers reporter’s questions on the final day of Pillars of Peace Hawaii, a new initiative created to advance the cause of peace in Hawaii and the world. (Photo: Jon Letman)

On world peace: I think peace nowadays is becoming one slogan. “World Peace” is something like fashion. While you are preparing all military forces, but say “for peace, for peace, for peace.” Genuine world peace must come from through inner peace. If full of anger here [gestures to self], how can one achieve peace? So, we need promotion of the oneness of humanity. The others may have a different language, different nation, even maybe little different system, but still human being. We all share same planet. If you go into space, from there if you look there’s no national boundaries, only continents. All these boundaries are man-made.

So, therefore, I think once we really develop awareness of oneness of humanity through education, then we can really build genuine peace. One of my dreams is the whole world demilitarized – very possible.

Read more about the Pillars of Peace Hawaii initiative here.

Share
This article may not be republished without permission from Truthout.
Jon Letman