The lack of affordable housing across the country has gained increasing attention in recent months. A report released earlier this year by the personal finance website SmartAsset found that in 12 of the top 15 US cities, rents had increased from 2015 to 2016. In some places, rent prices skyrocketed; San Francisco, Seattle and Miami all had increases of over 7 percent. In Los Angeles, average rental rates went up 17 percent.

Activists and renters nationwide are agitating around these issues on Thursday, September 22, to draw attention to what they are calling a “National Renter State of Emergency.” Over 50 protests, marches and other activities are occurring in more than 45 cities for the “Renters Day of Action,” with tenants coming together to put forward a list of national and local demands.

Organized by the housing coalition Homes for All, the national campaign is seeking a broad list of changes, including a national rent freeze, a freeze on all unjust evictions, and community control over land and housing. The campaign’s demands also include the right of tenants to organize and bargain collectively without fear of discrimination, retaliation or eviction.

For some local actions, evictions are the main focus. Antonio Gutierrez, an organizer with the Chicago’s Autonomous Tenants Union, said his group planned their protest at Daley Plaza, where all the city’s eviction cases are heard. In 2012, Chicago had more than 32,000 evictions in the city. (This statistic is from four years ago because it can be hard to track eviction numbers; the federal government has not recorded these numbers in past years and court records are incomplete and hard to navigate). “The process itself is very rapid and it’s always siding with the landlord or the landlady,” Gutierrez said. Tenants have very little opportunity to advocate for themselves. Housing advocates have also noted that cases in eviction court are not being properly recorded, making it nearly impossible to make an appeal. 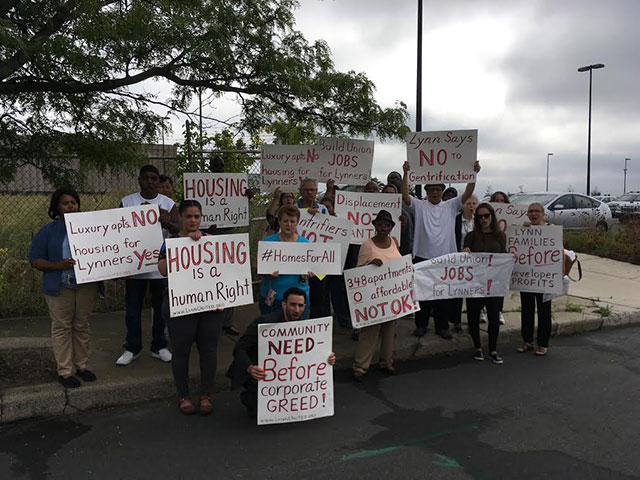 In Chicago, as with other cities, Gutierrez finds that women and their children are disproportionately affected by rising eviction rates. “We definitely see a pattern of single mothers and women with their kids being the target of these evictions,” he said. “We see a lot of kind of discriminatory policies that are happening, in terms of new companies coming into neighborhoods that are populated mostly by people of color, evicting them, and then getting new tenants that are of a different class, and sometimes racial background.”

Matthew Desmond, a sociologist whose recent book, Evicted: Poverty and Profit in the American City, helped bring national attention to the housing crisis, had similar findings. In a 2015 report, Desmond notes that low-income women, in particular Black women, are at high risk of eviction. In Milwaukee, one in five Black women reported being evicted at some point, compared to one in 15 white women, or one in 12 Latina women, according to Desmond’s research.

Eviction doesn’t just impact one’s housing, it destabilizes communities and families, often forcing kids to leave their schools. Desmond found that “workers who involuntarily lost their housing were roughly 20 percent more likely to subsequently lose their jobs.” The study also ties eviction to mental health problems and future difficulty with finding alternate housing and/or employment, as being evicted through the court system leaves a tenant with that judgment on their record. 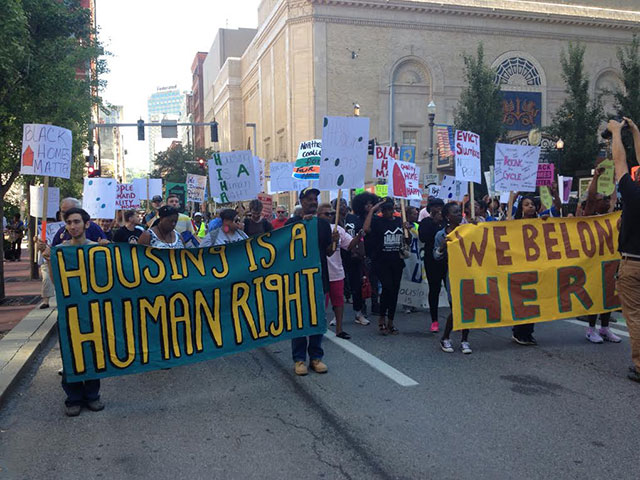 Felicia Alston-Singleton, a tenant advocate in Newark, New Jersey, got involved with her work as an organizer after successfully fighting her own eviction with the city’s housing authority. Several years ago, she said the housing authority fixed a problem with backed-up sewage in her unit.

“They fixed it but then my walls started turning green,” she said. “So I stopped paying rent.” She went to court every month for seven months until finally a decision was made in her favor. They dismissed her case and gave her back her rent money.

Alston-Singleton educated herself along the way, oftentimes Googling information she didn’t know. “It was very inspiring… to know that I did have rights,” she said. “So I said, ‘If I can do this for myself, let’s do it for my complex’ … And then other people started calling me.”

For the “Renters Day of Action,” Alston-Singleton is taking part in Newark’s 36-hour demonstration outside of City Hall. She plans to be at City Hall for the duration of the event. Activists and renters are calling on city officials to pass a rent control ordinance and to implement existing protections, like maintaining the city’s affordable housing. Alston-Singleton said the city has been tearing down subsidized housing and replacing it with luxury units. “They are making it unaffordable,” she said.

Indeed, last week the developer Dranoff Properties closed on $116 million in financing to build a high-rise luxury apartment building in downtown Newark. According to The Wall Street Journal, apartments in the building “are expected to rent at $2,000 a month for a one-bedroom and $4,500 a month for a three-bedroom.”

Anthony Romano, a national organizing director with Homes for All’s Right to the City Alliance, noted that one of the campaign’s goals for the September 22 action is getting people familiarized with their rights as tenants. “We needed to unite and have a day where we can really lift up our collective voice,” Romano said, “and to lift up our solutions.” 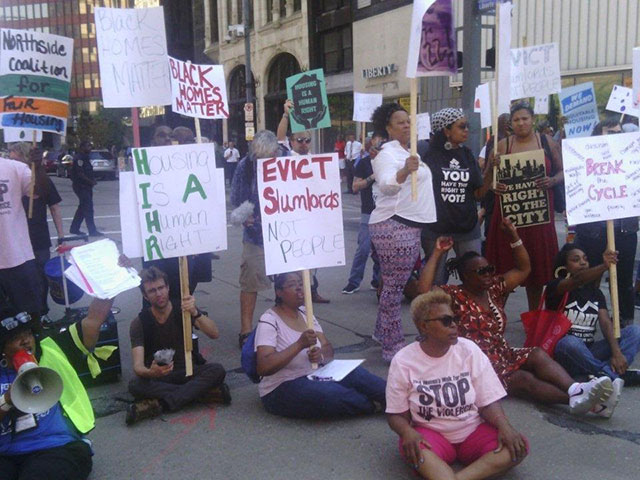 In some cities, gentrification is the most pressing issue tenants are facing. Tenant organizers in Minneapolis are leading people on a tour of the city’s light rail today, pointing out recent areas of gentrification. These activists are part of Defend Glendale, a group working to defend Glendale Townhomes Public Housing, which is under threat of demolition. Ladan Yusuf, who lives in Glendale, said the housing units are in the middle of an affluent neighborhood and property value has gone up since the light rail went in nearby. “We found out through the grapevine,” she said, that the city wanted to demolish Glendale. “We’re fighting to keep our homes.”

She is one of 30 tenant leaders from the housing complex, where she says most residents are people of color and about 60 percent are immigrants. “We are seeing huge amounts of displacement right now,” Yusuf said. A lot of families are finding it hard to find affordable housing in the city.

“Gentrification is really happening here and Betsy Hodges isn’t doing anything about it,” Yusuf said of Minneapolis’ mayor. “A lot of working-class families feel that she is not on our side.”

Romano pointed out that the number of people affected by rent increases is growing as fewer people are owning homes. “It’s an economic reality,” Romano said. “People just don’t have the money to buy homes.” He believes landlords and the real estate lobby are taking advantage of the increased number of renters by jacking up the cost of rent.

“We don’t lightly use the term ‘state of emergency’,” Romano said. “‘State of emergency’ is used because of the sheer quantity of people suffering and the severity of that suffering.” A 2016 Harvard study found that the number of renters who are “cost burdened” rose by 3.6 million from 2008 to 2014, to a total of 21.3 million households. The Department of Housing and Urban Development considers a family to be cost burdened if they pay more than 30 percent of their income for housing. To put this in perspective, the number of people who rent has increased by 9 million between 2005 and 2015, an earlier Harvard study noted, making it “the largest 10-year gain on record.” In the same period, renters who are severely rent burdened, meaning they pay more than 50 percent of their income for housing, went from 2.1 million to a record 11.4 million.

The organizers of the September 22 actions know that spreading the word about these issues and about tenants’ rights is an important first step and the Renters Day of Action is intended to broaden awareness while bringing impacted people together. “When you are going through something and you meet someone else going through it, you don’t feel so alone,” Alston-Singleton said. “Then you’re ready to fight.”

Share
Copyright, Truthout. May not be reprinted without permission.
Kerry Cardoza