While the tax cuts would be greatest at the top of the income scale, Perry's proposal would give all taxpayers at least some tax cut, according to the analysis. Those making less than $10,000, for example, would get an average tax cut of $28.

The largesse comes with a cost, however. The center estimates the Perry plan would mean $995 billion less for the federal government in 2015 — a shortfall that could well be added to the annual deficit and the federal debt.

The analysis is the first independent look at the plan from the Texas governor, one of several flat tax and tax overhaul proposals being offered by candidates for the 2012 Republican presidential nomination. 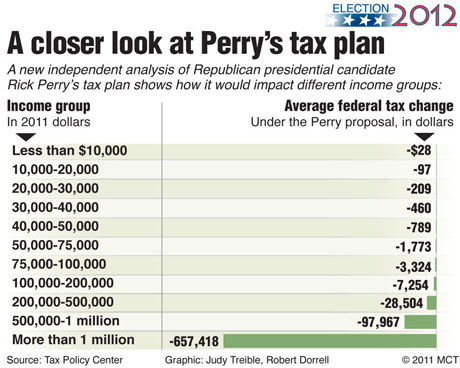 Notably, Perry's plan would offer greater tax cuts to the wealthiest Americans than the “9-9-9” plan of rival Herman Cain. But Perry's blueprint also would give everyone a cut, while Cain's initial plan would raise taxes on everyone making less than $200,000.

The impact of Perry's overall proposal, according to the center:

In one, anyone would have the right to use the current tax system, which presumably guards against Cain-like tax increases.

In the second, Perry would allow people to pay 20 percent of all their income AFTER they deduct $12,500 per person, charitable contributions and state and local taxes.

He'd phase out the deductions for incomes above $500,000. But he'd also add in other tax cuts for wealthier households by eliminating taxes on long-term capital gains and some dividends, and repealing the federal estate tax levied on the richest families in the country.

Based on data supplied by Perry's campaign and its own analysis by John Dunham Associates, the Tax Policy Research Center concluded that Perry's plan would let the Bush tax cuts expire as scheduled at the end of 2012, in favor of the new system.