This is your Sequoia touch-screen voting machine…. 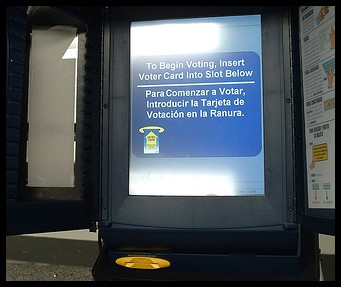 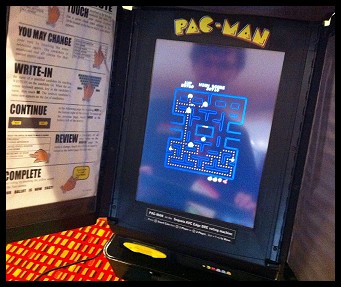 Sequoia’s voting machines, used in some 20% of U.S. elections, employ Intellectual Property (IP) still owned by a Venezuelan firm tied to Hugo Chavez. Sequoia itself is now owned by a Canadian firm called Dominion. (Though Dominion, like Sequoia itself before them, lied about the continuing Venezuelan/Chavez ties in their recent announcement of the acquisition, as detailed exclusively by The BRAD BLOG, to little notice, in June.)

The Pac-Man hack onto the Sequoia/Dominion voting machine was revealed this week. It was accomplished without breaking any of the “tamper-evident” seals that voting machine companies and election officials claim are used to ensure nobody can physically hack into them without being discovered.

“We received the machine with the original tamper-evident seals intact,” the hackers from Princeton and University of Michigan report. “The software can be replaced without breaking any of these seals, simply by removing screws and opening the case.”

This particular Sequoia DRE (Direct Recording Electronic) voting machine model is known as the AVC Edge. It used to be described on the Sequoia website and promotional materials as “tamperproof”. It has been hacked previously and has failed time and again in recent elections, even though election officials continue to force voters to use them.

For example, the AVC Edge miscounted votes in New Jersey in 2008, the same election during which the systems also failed to even boot up when polls opened at a Hoboken precinct, forcing voters, including the state’s then Governor John Corzine, to wait some 45 minutes before they could cast a vote on it at all. Whether those votes were recorded accurately as per the voters’ intent, once the machines finally booted up, is scientifically impossible to know. Use of any touch-screen voting machine is the equivalent of a 100% faith-based election. No votes cast during an election —- none —- can be verified as having been accurately recorded on such systems. Ever.

J. Alex Halderman and Ariel J. Feldman, the academic computer science and security experts who hacked the Sequoia machine, this time with Pac-Man, report that “In 2008, the AVC Edge was used in 161 jurisdictions with almost 9 million registered voters, including large parts of Louisiana, Missouri, Nevada, and Virginia.”

As first reported by The BRAD BLOG in 2006, Halderman and Feldman previously hacked a touch-screen voting machine made by Diebold Election Systems, Inc. (which became Premier Elections Solutions, which was then also purchased by Dominion, just like Sequoia). They hacked the Diebold/Premier system with a virus that was able to pass itself from one machine to the next and flip the results of an entire election with little chance of detection. That hack was demonstrated, among other places, live on Fox “News” shortly after it was announced. (Watch the video here.)

Short of adding “tamper-evident” seals to these machines —- the same seals that went undisturbed when Pac-Man was hacked onto the Sequoia AVC Edge machine —- very little has changed since 2006, and most of the same hackable (and often 100% unverifiable) electronic voting systems are still in use today, in both primary elections this year (such as the one where the unknown, unemployed campaign-less Alvin Greene was said to have defeated the four-term state legislator and circuit court Judge Vic Rawl for the Democratic U.S. Senate nomination), as well as in the general elections this November.

The voting machines not made by Sequoia, as used in the other 80% of jurisdictions in the U.S., work largely the same way, and are largely equally as hackable.

Here are details and more pictures on the Pac-Man hack fom the Diebold/Virus and Sequoia/Pac-Man hackers themselves, though the way they explained it all on their YouTube posting when publishing the video above, tells you just about all that you need to know…

This is the Sequoia AVC Edge touch-screen DRE voting machine. In 2008, it was used in jurisdictions with almost 9 million voters. Alex Halderman and Ari Feldman replaced the voting software with Pac-Man. They did this in three afternoons, without breaking any tamper-evident seals. It would be easy to modify the software to steal votes, but that’s been done before, and Pac-Man is more fun.