It’s been one month since the largest climate march in history, and recent “Climate Action” pledges from global leaders like the Department of Defense, President Obama and the United Nations do not add up to what communities need.

The People’s Climate March on Sunday September 21, 2014 was a major historic event. It was historic because of the unprecedented numbers – 400,000 people came out to march. It was historic because the participants and leaders of the march were made up of primarily people of color on the frontlines of the climate and economic crises: communities impacted by Hurricane Sandy, youth of color doing environmental justice work, and indigenous peoples from around the world led a broad march from many sectors including faith communities, labor, and more. For Grassroots Global Justice Alliance (GGJ), as co-anchor of the Our Power Campaign, it was historic to mobilize for this march because of the way the grassroots organizing sector and climate policy organizations came together to collaborate in the planning of the march, and laid the groundwork for strengthened relationships and a broader united movement for climate justice. 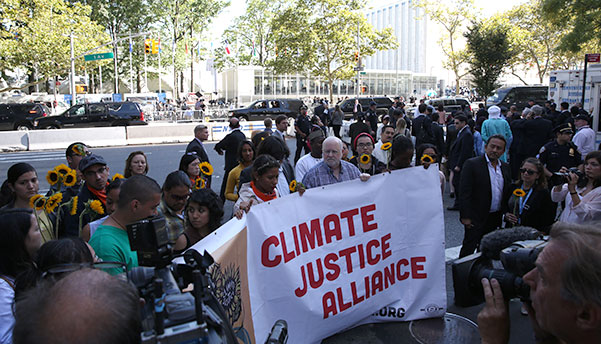 Members of the Our Power Campaign attempting to read and deliver a statement to the UN. (Photo courtesy of Sha Grogan-Brown) 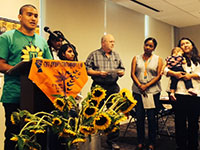 Members of the Our Power Campaign reading the statement at the People’s Tribunal before delivering it to the UN. (Photo courtesy of Sha Grogan-Brown)In days following the march, people took action to pressure the United Nations (UN) and global leaders to take real community-led action on Climate Change. On Monday September 22, Occupy Wall Street activists responded to a call to action from grassroots organizers of the Our Power Campaign and organized the Flood Wall Street mass sit-in.On Monday September 22 and Tuesday September 23, the Our Power Campaign held a People’s Climate Justice Summit and a People’s Tribunal to offer up community-led solutions and call out the False Promises that the UN calls “Climate Action,” calling on global leaders to catch up to communities on the ground who know what kind of Climate Action they really need.

Unfortunately, the UN response was far from historic. The UN Climate Summit’s branding was deceptive: “I’m for Climate Action.” At first glance, that may seem like a good thing. We want action on climate, right? However, what the UN calls “Climate Action” is not the kind of action that communities around the globe need, so much so that on Tuesday September 23, members of the Our Power Campaign delivered a statement to the UN calling out their inaction on climate change and calling the UN Climate Summit “little more than a pep rally pushing carbon trading offsets and weak voluntary or limited pledges for emission cuts leading up to the global climate treaty negotiations in Paris next year.”

President Obama’s response was disappointing as well. He shared the UN’s rhetoric about “taking action” and “reducing emissions” yet the pledges the US made will not get us anywhere close to where we need to be in order to prevent major climate catastrophes.

One month after the historic People’s Climate March in New York City, we still have yet to see global leaders make moves to take the “Climate Action” that frontline communities really need.

While it’s notable that the DOD finally acknowledges that the devastating impacts of climate change on the world’s most vulnerable populations are happening NOW rather than regarding climate change as a future threat, the majority of this report focuses on the impacts climate change will have on the US military’s “more than 7,000 bases, installations, and other facilities.” In fact, this report appears to make the case for increased militarization in places where the US has “assets,” and for more investment into expanding military operations.

Increased militarization will not make things better for poor and low-income families, is more likely to lead to greater political destabilization in many countries of the Global South and heightens police violence in communities of color, as recent events in Ferguson, Missouri clearly illustrated in the aftermath of the killing of Michael Brown.

The DOD is one of the world’s largest greenhouse gas emitters, and the single largest consumer of energy in the US, yet renewable energy has never represented more than 5% of total DOD facility consumption. The DOD should instead prioritize their mitigation plans and take on the lion’s share of US goals to reduce greenhouse gas emissions.

Despite inaction from global leaders, the People’s Climate activities last month were historic. But what happens next matters even more. Frontline communities in the US and around the world are struggling every day to survive this climate crisis, and are organizing around community solutions to climate change. GGJ members are working with organized communities around the world to create a new climate agreement, written with collective input from civil society, to influence upcoming UN climate meetings in what we are calling the People’s Climate process. 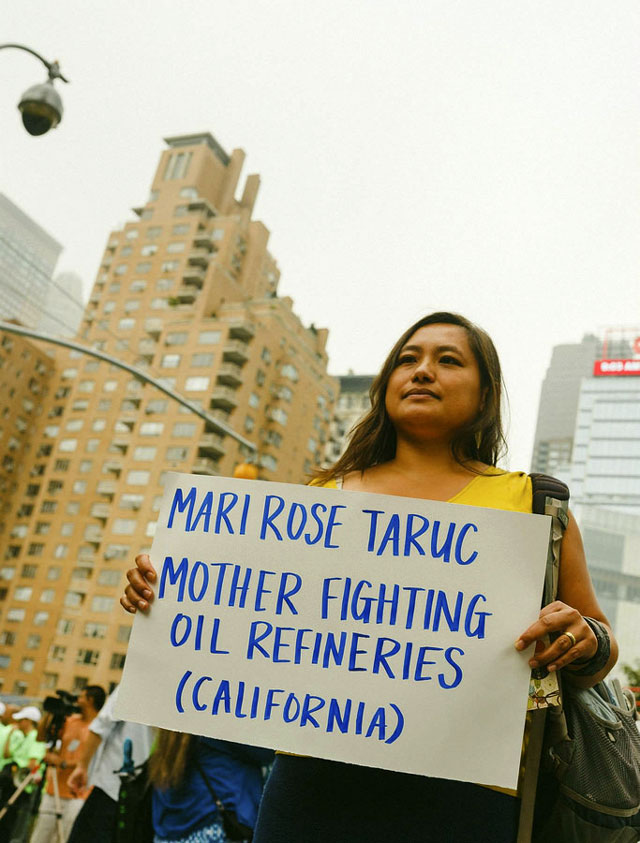 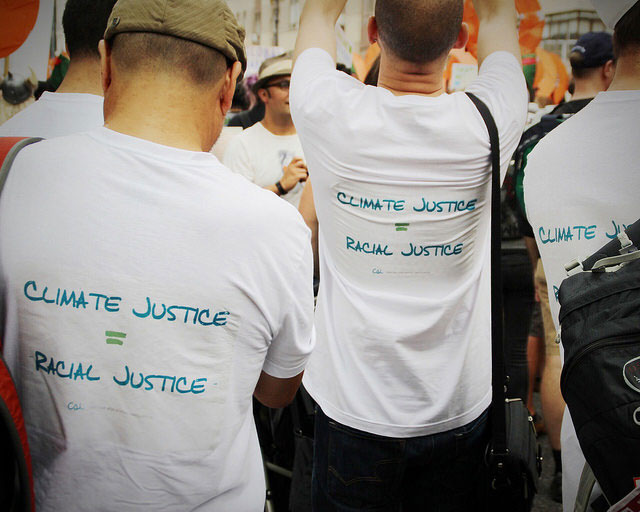 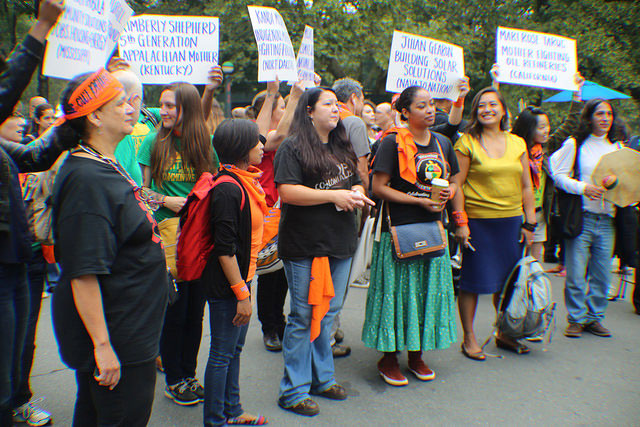 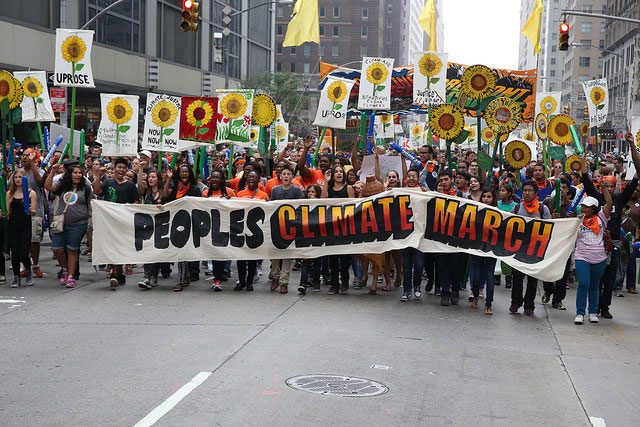 Youth of color on the frontlines of the climate crisis carrying the front banner. (Photo: Farhad Ebrahimi) 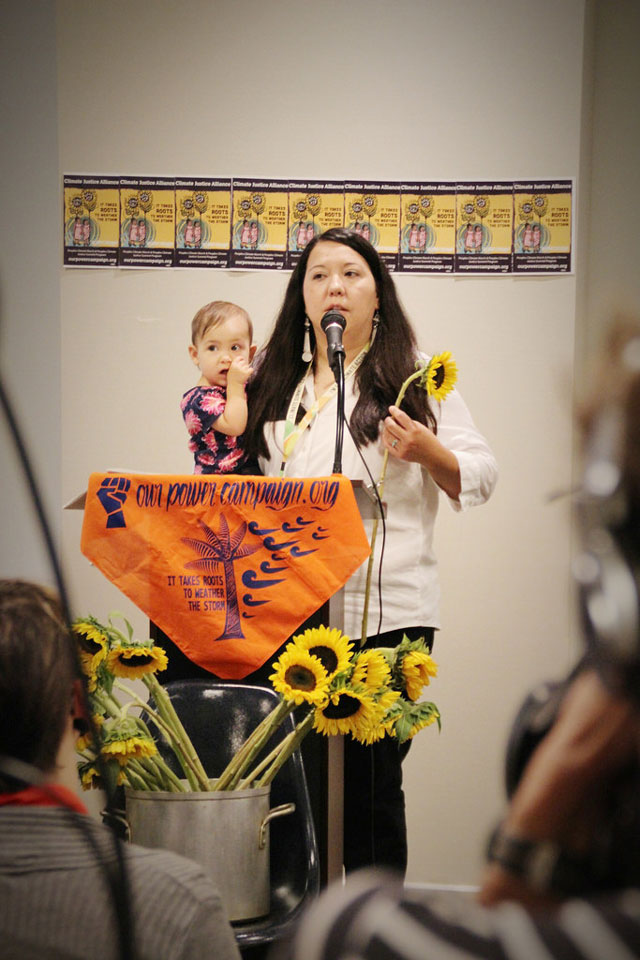 Shaun (Sha) Grogan-Brown is the Development and Communications Coordinator of Grassroots Global Justice Alliance (GGJ), a national alliance of over 56 US-based grassroots organizinggroups building power for poor and working families and communities of color in 20 states across the US. GGJ is co-anchor of the national Our Power Campaign, organizinggrassroots and specifically people of color leadership on climate change to create strategies for a scalable, socially and economically Just Transition away from unsustainable energy development and use, to remedy the root causes of climate change and create stronger, healthier local communities.