Occupy Wall Street's campsite at Liberty Square has proven to be an extremely popular tourist destination and a highly effective tool (some might say a giant middle finger) used to publicly humiliate Mayor Bloomberg. However, the group's most powerful moments arose from its ability to utilize civil disobedience elsewhere in creative ways.

There was the Brooklyn Bridge incident, one of the largest mass arrests in the country's history, followed by the occupation of Times Square, which led to the NYPD starring in some infamous Youtube clips, such as charging horses into a penned crowd and Marine Sergeant Shamar Thomas screaming at police that there is “no honor” in hurting unarmed civilians.

These actions were big, bold, and captured the establishment media's attention, garnering enormous sympathy from the public. It were these moments in the early days of Occupy that truly set it apart from the sad “protests” of yore where a handful of activists would show up with their sad cardboard signs for an hour, or two, before scampering back to their homes.

More than any other movement before it, Occupy seems to understand its audience, and what encounters will ensnare the attention of the Youtube crowd. Perhaps most importantly, the actions listed above entailed physically disrupting the normal flow of things.

Following that peacefully disruptive tradition, some Occupy activists have scheduled a march from Liberty Square in NYC to McPherson Square in Washington D.C. starting Nov. 9 and ending Nov. 23. According to @nycmarch2dc's official statement, the march is being waged to protest retaining the Bush tax cuts for the rich, hence the Nov. 23 arrival date in time to protest the Congressional Super Committee, which has until that cutoff date to deliberate before it must submit its austerity proposals to Congress.

A recent Washington Post-ABC News poll found a majority of Americans recognize an increasingly large gap between rich and poor, and they want the federal government to address the disparity. One of the ways to address the wealth divide, according to this OWS faction, is by rolling back Bush era tax cuts.

“There will be 2 trillion dollars in revenues saved if the Bush tax cuts are allowed to expire. Some personal incomes of the Super Committee members fall in the 1% therefore it is easy for them to make decisions that affect the 99% as they themselves are not affected by those decisions. The Super Committee may simply extend their deadline (as is often the case), but either way we want to be there to fight for the 99% with Occupy DC!” the group states.

#OccupyTheHighway, the event's hashtag on Twitter, includes a hand-drawn map that outlines the gist of the march's intended course, including plans to visit Occupy Philly and Occupy Baltimore during the march, and nightly General Assemblies and discussions along the route. 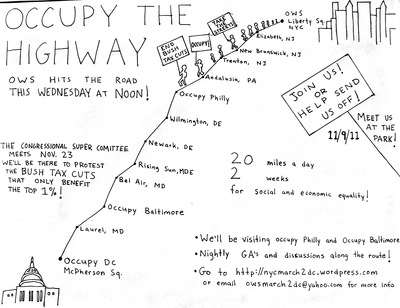 In its written statement, the group expresses hope that others will join in the march: “Whether for an hour, a day, or the full two weeks, we feel it’s imperative for OWS to respect the historical significance of long distance marches to support, promote, and encourage economic and human equality.”

As of right now, only about a dozen people have volunteered to make the arduous journey with daily distances of 20 miles, and the group will sustain itself on a budget of $3,000 by the GA, which will be spent mostly on gear, food, media, transportation back to OWS, and any unforeseen emergencies.

The march follows Occupy's tradition of physically taxing protest. Next week marks the two-month anniversary of the occupation of Liberty Square, which has been in itself a physically demanding protest that leaves protesters vulnerable to the elements, most dangerously the increasingly frigid nighttime temperatures.

Medics I spoke to documented cases of hypothermia weeks ago, before the sudden dip in temperatures had even occurred, an ominous warning of things to come.

It seems this is the last frontier of civil disobedience – where protesters sacrifice their bodies in order to exercise their First Amendment rights. The far more extreme example of this, of course, was Mohamed Bouazizi's act of self-immolation in December 2010 in Tunisia that spurred the Arab Spring.

When the powerless have no means of recourse, they turn to using their own bodies to make political statements. Self-immolation, hypothermia, exhaustion: these acts obviously have vastly varying degrees of severity, but the spirit behind them is the same. This is how the marginalised regain their power.