Starting this week, three US churches – the United Church of Christ, the Episcopal Church, and the Mennonite Church USA (MCUSA) – will consider resolutions to apply economic leverage to end the Israeli occupation of Palestinian territory.

If the resolutions pass, these churches will join the Presbyterian Church USA, the United Methodist Church and various Quaker bodies, which have already divested from US or international companies that supply equipment or services used by the Israeli military to enforce its occupation of Palestinian territory.

At stake is the question of whether the churches are willing to ensure that their financial holdings do not profit from Israeli actions that harm Palestinians or violate international law.

Meanwhile, support for BDS is also growing within Jewish and Muslim circles. Jewish Voice for Peace has grown to more than 60 chapters over the past year as the only nationwide Jewish group supporting BDS. And American Muslims for Palestine is a key partner in interfaith campaigns to support divestment by Christian churches.

The Growing Strength of the BDS Movement 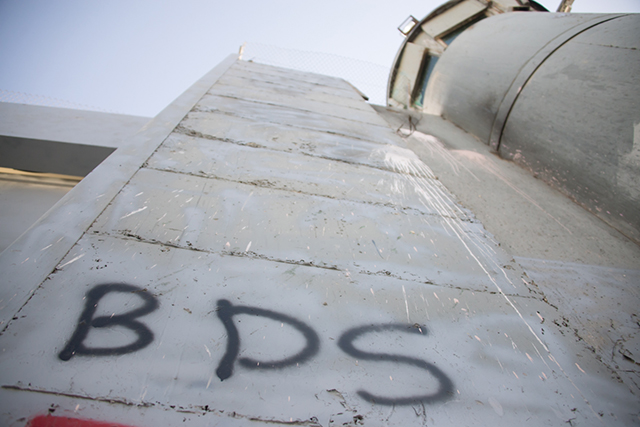 Once dismissed as marginal and ineffective, the Palestinian-led movement of boycott, divestment and sanctions (BDS) is rattling the highest levels of Israeli government. Israeli President Reuven Rivlin has warned, “The winds are changing, and we must regard this as one of the top strategic threats.” Prime Minister Benjamin Netanyahu recently pledged 100 million shekels ($26 million) to fight BDS.

A recent report by the United Nations Conference on Trade and Development indicated that the BDS movement has had real success, citing a nearly 50 percent drop in foreign investment in Israel last year: “What led to the drop in investment in Israel are [the offensive against Gaza, known as] Operation Protective Edge and the boycotts Israel is facing,” it said.

The bloodshed in Gaza came shortly after Israel walked away from US-sponsored peace talks and was the worst episode of violence in the region since the 1967 war, in which Israel occupied the West Bank, Gaza and East Jerusalem. Reports by the UN and other human rights agencies continue to expose possible war crimes by both sides, but the death toll indicates just how one-sided the violence was: 2,200 Palestinians, mostly civilians, were killed, while 67 soldiers and five civilians died on the Israeli side.

Since then, with the Obama Administration voicing frustration with the hardening line of the Netanyahu’s new government, grassroots activists are increasingly turning to BDS.

“For the churches that are discussing divestment measures,” said Bisan Mitri, a Palestinian Christian who is part of the Palestinian BDS National Committee, “I think with the current situation, it will be more difficult for the pro-Israel and Zionist camps to state their cases and defend them.”

Mitri is one of more than 3,000 Palestinian Christians who have signed the Kairos Palestine document that calls for “boycott and disinvestment as tools of nonviolence for justice, peace and security for all.” The heads of 13 Palestinian churches were also among the signatories.

“General thinking about Israel and the military occupation of Palestine seems to be approaching a tipping point in many churches,” said Rev. Diane Dulin, a member of the UCC Palestine Israel Network (UCC PIN). “I remain optimistic that the UCC will take a bold stand as the Presbyterians did last summer.” 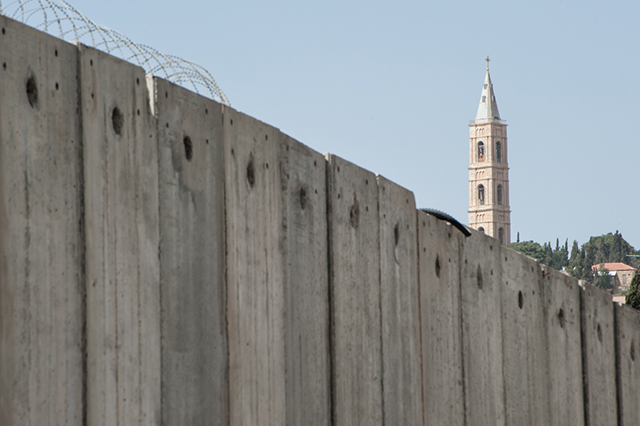 The belltower of the Russian Orthodox Church of the Ascension rises above the Israeli separation wall that divides Palestinian neighborhoods on the Mount of Olives in East Jerusalem. (Photo: Ryan Rodrick Beiler)

If the UCC, the Episcopal Church and the MCUSA join the growing movement for BDS, their actions will undoubtedly stir controversy.

Divestment resolutions in the UCC have already passed in a number of regional conferences, indicating widespread support. But the effort will be challenged in a resolution from its pension board, which, UCC PIN is concerned, would “inappropriately restrict the freedom” of the church regarding “economic leverage.” Much of the debate prior to their conference, which began on Thursday, June 25, has focused not on the reality of the occupation, but on the tactics most appropriate to address it.

The Episcopal Church is debating no fewer than seven resolutions related to Palestine and Israel, several of them intentionally designed to counteract divestment. Their meetings have been underway since Monday, June 22, and a vote could come early next week.

MCUSA’s single resolution was drafted in consultation with a range of key leaders from the church and its agencies, many of whom went on church-sponsored “Come and See” tours to witness the reality of occupation firsthand and meet with both Israeli and Palestinian peace activists. Their conference begins Tuesday, June 30.

All of the church resolutions focus on investments with US or international corporations – not Israeli firms. While some resolutions list specific firms, others define ongoing processes to screen out occupation-complicit companies.

A year ago, when the PCUSA divested from Caterpillar, Hewlett-Packard and Motorola for supplying equipment used in the occupation, major Jewish organizations denounced the measure as “one-sided,”“divisive,” and “demonizing.” But since that time, some prominent Jewish voices have called for more openness to BDS.

Jewish activists are often able to speak more boldly than other activists, who are more vulnerable to accusations of anti-Semitism – a common charge aimed at BDS activists.

“Zionists, from Benjamin Netanyahu down to Zionist organizations here in the US, have done a good job of conflating criticism of Israeli policies with anti-Semitism,” said Kristin Szremski of American Muslims for Palestine. “We have to educate our communities that BDS is not anti-Semitic. It does not target individuals, nor does it target the religion of Judaism.”

Sydney Levy, advocacy director of Jewish Voice for Peace, agrees, stating that there is “a confusion that is actually being sown and created by the state of Israel and by the Israel lobby.”

“The more that they confuse the issue, the harder it is for us to address real anti-Semitism,” said Levy. “True interfaith relations are based on common principles – restoring dignity to everybody and understanding that everybody is equal. Those are basic principles every religion, every faith community has.”

The Emergence of Interfaith Coalitions for BDS 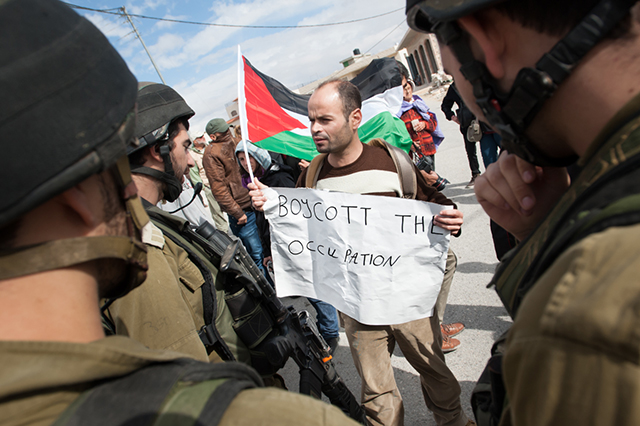 A Palestinian activist with a sign reading, “Boycott the Occupation,” faces Israeli soldiers during a weekly demonstration against the occupation and separation wall in the West Bank village of Al Ma’sara, November 9, 2012. The Israeli separation wall, if built as planned, would cut off the village from its agricultural lands. (Photo: Ryan Rodrick Beiler)

Last year, SodaStream announced that it would move its factory out of the West Bank and inside Israel, though it claims the move is not because of the boycott. Both Veolia and G4S have also announced changes in policy that activists attribute to BDS pressure – though these changes have yet to take effect.

Four years ago, American Muslims for Palestine also initiated boycotts of Israeli dates, many of which come from settlement farms in the West Bank. Such a boycott is particularly relevant during the current season of Ramadan, which began June 18.

“Because Muslims break their Ramadan fasts with dates, we are one of the largest consumer groups of dates in this country,” said Szremski. “We asked consumers not to buy dates marketed by Hadiklaim or Mehadrin and to not buy the brands of Jordan River, Jordan River Bio-Tops or King Solomon.”

American Muslims for Palestine fully endorses the Palestinian BDS call, which includes three demands: an end to the occupation, full equality for Palestinian citizens of Israel, and the right of return for Palestinian refugees, according to UN Resolution 194.

All of the church resolutions currently up for debate focus on the first point. For example, “UCC PIN chooses to focus particularly on the first of these goals, believing that an end to the occupation is an essential ingredient for a just peace.”

Sahar Vardi, a member of Boycott From Within, a group of Israeli citizens who support BDS, explained why tactics vary: “Today, with much of the international community still not completely aware of the way the economy of the occupation crosses over both sides of the Green Line [demarcation line set out in the 1949 Armistice Agreements], it is more effective to focus campaigns on companies directly involved in the settlement or military systems.”

“But it is still important to understand how that economy of occupation works,” said Vardi, who served three jail terms for refusing to serve in the Israeli army. “Every single shekel in the Israeli economy is directly or indirectly invested in growing the Israeli occupation. That is why the boycott movement has identified Israel as a target, and not only economic operations specifically invested in the occupied territories.”

Regardless of the exact form or tactic that activists employ within the outlines of the BDS movement, there is broad agreement that in light of a failed peace process and ongoing violations of international law, BDS is the best tool left to pursue a just peace.

“Boycotts, divestment and sanctions are nonviolent tools that justice- and peace-loving people around the world can use in response to the Palestinian call to put economic and political pressure on the Israeli government to end its denial of Palestinian rights,” said Bob Ross, advocacy chair of the Presbyterian Church USA’s Israel Palestine Mission Network. “Israeli democracy has failed to bring about these rights. Armed violence has failed as well. Boycotts, divestment and sanctions have proven to work.”

Few figures have more personal experience and moral authority on this subject than Archbishop Desmond Tutu, who has endorsed church divestment efforts.

“When I was in the Holy Land, I saw the marks of apartheid in the policies of the Israeli government,” he declared in a letter to the Episcopal Church, urging the faithful to “recognize your own country’s complicity in Palestinian suffering under occupation, and of your investments that undergird that suffering.”

“You proved with us in South Africa that only economic pressure could force the powerful to the table,” concluded Tutu.

With faith flagging in the efforts of politicians to resurrect a viable peace process, activists of all traditions are praying that grassroots efforts will succeed where governments have failed.

Share
Copyright, Truthout. May not be reprinted without permission.
Ryan Rodrick Beiler

Ryan Rodrick Beiler (www.ryanrodrickbeiler.com) is a freelance journalist based in Oslo, Norway, and a member of the Activestills photography collective (activestills.org). He lived in Jerusalem and the West Bank from 2010-2014.