Oil permeates the whole economy. Even if you telework in a solar-powered home and tote your groceries home by bicycle, the price of petroleum affects what you spend on goods and services.

This impact, of course, is uneven. The collapse from $105 per barrel last summer to as little as $37.75 in late August in US oil prices brought relief to wallets across America – while kneecapping the industry’s profits and costing tens of thousands of workers their jobs.

But one tiny segment of the oil workforce isn’t hurting. 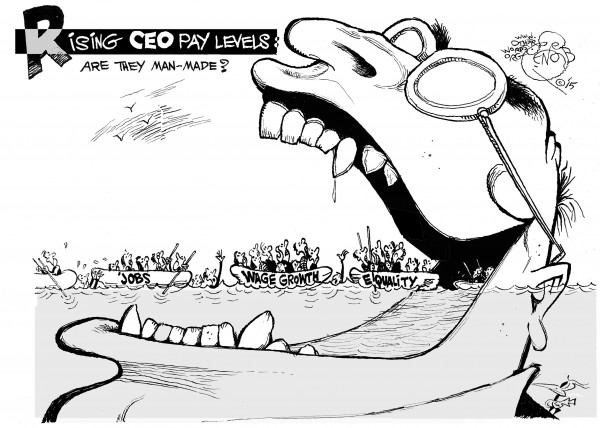 Tillerson, Lance, and Watson topped the list when a team of my Institute for Policy Studies colleagues catalogued what the nation’s 30 biggest publicly traded oil, gas, and coal companies paid their leading executives last year.

This new report, Money to Burn: How Our CEO Pay System is Accelerating Climate Change, shows that these Big Fossil giants handed their chief executive officers a total of $442.1 million as their profits stalled, fell, or – in the case of the Peabody Energy coal company – ran big losses.

My colleagues added up all the money the highest-paid officers of each company took home over the past five years. It amounted to nearly $6 billion.

What else could that $6 billion cover? One possibility: creating nearly 100,000 green-energy jobs for a year, the report’s authors estimate based on prior research.

The number of Americans employed in the solar, wind, geothermal, biofuels, and small-scale hydropower industries soared to 724,000 last year, according to the International Renewable Energy Agency. That marks a 16 percent gain from 2013, boosted by a 43 percent surge in wind-power employment.

The solar industry is also fueling this growth. It’s gaining jobs 10 times faster than the overall economy, and there are now more than twice as many solar workers as coal miners. At this rate, renewable-energy workers will soon outnumber people toiling in fossil-fuel industries.

Employment in the “mining and quarrying sector,” a category that lumps oil, gas, and coal together, fell to 781,500 jobs in July from 848,000 a year earlier, the Bureau of Labor Statistics found.

Given their industries’ breakneck growth, green-energy employers can struggle to find new workers with the right skills. To bridge this gap, the government is ginning up green-job training.

One promising example is the Solar Ready Vets program. Since this pilot’s launch a year ago, 100 transitioning service members from Naval Station Norfolk in Virginia, Fort Carson in Colorado, and Camp Pendleton in California have gotten training. Every former soldier, marine, and sailor who completed these six-week courses landed at least one job offer in the solar industry, according to the Energy Department – which picked up the tab for the trainees’ tuition, materials, and exam fees.

A big draw for this growing industry is the competitive pay. Wages range between $20 and $60 an hour, according to the Solar Foundation.

That’s a mere sliver of the $14.7 million haul those 30 oil, gas, and coal CEOs averaged last year. But it’s a living wage in a business that’s curbing pollution and could help slow the pace of climate change.

Labor and Environment: Next Steps for Dialogue

What does the future hold for the relationship between environmentalism and organized labor? Judging from the highly-publicized controversy over the Keystone XL pipeline, America might appear to be…