Slowly but surely, renewable energy has crept into the marketplace, commanding a bigger percentage of the energy economy than ever before. Still, politicians argue that Americans are more interested in cheap energy than clean energy, and we’re willing to do whatever it takes to get our fix. A new Gallup poll begs to differ, however.

The survey, conducted March 7-10, 2013, found that 2 out of 3 Americans, including Republicans, want the U.S. to place more emphasis on the development of solar. Wind energy wasn’t far behind, while fossil fuels, including natural gas, trailed the pack, according to Gallup. 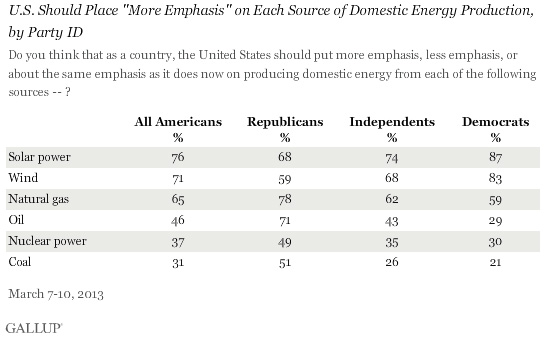 76 percent of the 1,022 adults surveyed said they want the U.S. to put more emphasis on producing domestic energy using solar power. Wind power was next in line, garnering 71 percent support among respondents. Natural gas could only muster third place, with 65 percent of those surveyed saying they would prefer greater emphasis on its production.

Encouragingly, the Big Three of Fossil Fuels were even less popular. Only 46 percent of those surveyed thought the U.S. should continue to emphasize the production of oil, and nuclear power captured only 37 percent support. Least favored of all was coal, with only about one in three Americans wanting to prioritize its domestic production.

Unsurprisingly, Republicans and Democrats disagree most on the priority that should be given to oil as a future energy source — with 71 percent of Republicans wanting more emphasis placed on it, compared with 29 percent among Democrats (maybe someone should tell President Obama).

Where Americans live makes a difference in their views about which sources of domestic energy they want the U.S. to emphasize more, reports Gallup. Those living in the South tend to be more supportive of traditional energy sources, such as oil and coal than are those in other regions.