In the US and Europe, the movement of squares has responded to attacks on the social good by debt resistance and direct democracy. In assemblies, mic checks and self-organization, they demonstrated that another world is possible. Now the movement is articulating full-scale resistance.

The movement of squares was born of the crisis of debt and democracy. In the wake of the global financial crisis, debt has been used by the 1 percent as a tool of oppression against the 99%. The corruption of so-called democratic governments has been laid bare and their rule delegitimized, and now it is Phase Two. Activists from this new social movement are building a global resistance.

The crisis began in the mid-1970s when the US went off the gold standard and pursued policies of inflation, effectively plunging the Third World into a debt crisis. From Burkina Faso to Argentina, countries took out predatory loans from the IMF and World Bank to pay the difference, but they could not pay and, in many cases, did not pay back these loans. Domestically, the US experienced decades of deregulation, which expanded the financial sector and allowed for increased speculation.

By 2006 and 2007 the housing bubble was already in the making. Market rates had begun to fall, causing subprime mortgage holders to default on their loans. Major financial institutions that held these mortgages with other assets overvalued them and repackaged them, but that couldn’t last. The bubble burst in September 2008.

Despite public outcry, Congress responded by approving the Emergency Economic Stabilization Act of 2008 and they effectively socialized the private debts of the financial sector and placed the burden of these debts on taxpayers. Very little has been done to help the 99%, who were already burdened by crushing personal private debts including medical, student, credit debts and other financial instruments. 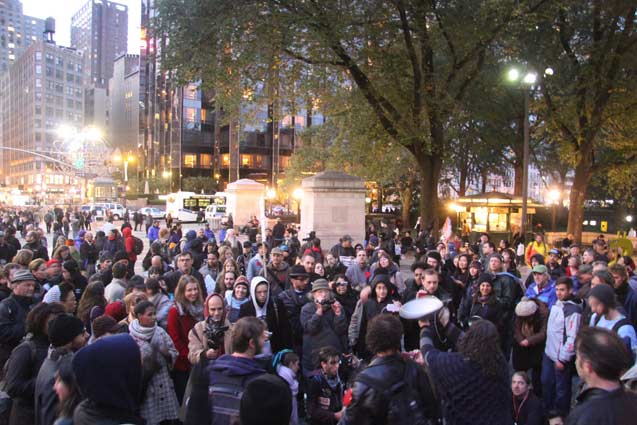 The average American has a double debt burden. First, there is their personal debt. Then there is the public debt taken from the private losses, which, in turn increases personal debt. Why? The federal government uses the increase in national debt as an excuse to make cuts to social services. If the social welfare is not provided for, then the burden is placed on the individual. This is the failure of the modern liberal democracy.

In Europe, they also experienced a private debt crisis that caused banks to be bailed out and consolidated. Economists and politicians call this the “sovereign debt crisis.” Euro zone countries, mainly in the south, have been underwater and seeking bailouts from the Troika. This has been undermining the sovereignty of EU members and has essentially meant a “structural adjustment” of the member states. The southern countries are making cuts to social services and effectively disassembling the European welfare state.

The movement of squares responded in the US and Europe by reclaiming the public sphere and demonstrating an alternative to a failed economic and political system. But it is only now, after the first wave of occupations, that the movement is articulating a real resistance.

I was privileged enough to attend Agora 99, held in Madrid in early November, as an emissary from Occupy Wall Street. The convergence was the first meeting of the Occupy, 15M and Bloccupy networks in Europe and was held in an archipelago of social centers throughout the city. The conference organizers framed the event around debt, democracy and rights. 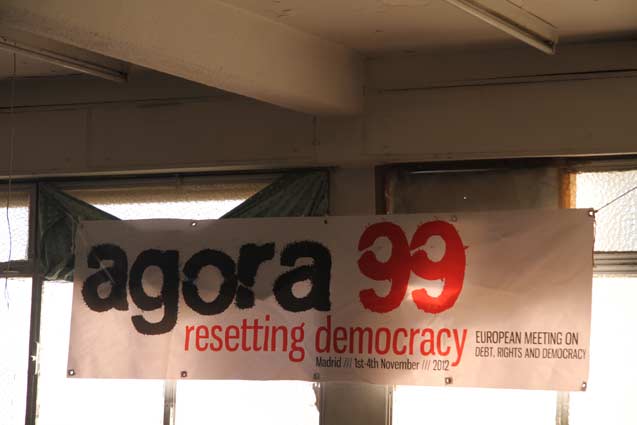 I participated in the debt and democracy axis. The debt axis was composed of groups from ICAN (International Citizens Audit Network). The democracy axis reflected the interests of various occupy groups, 15M commissions, assemblies. Each axis met throughout the course of the weekend and developed statements and roadmaps for action. It was a beautiful exercise in consensus-building from the movements who do it best.

The closing assembly was held in EKO (espacio sociocultural liberado autogestionado), a self-managed squatted social center run by the Popular Assembly of Carabanchel, which houses a café, library, free store, and assembly space. On the third floor the facilitation team huddled before the assembly began drafting an agenda that would meet the needs of all axes. They also arranged translation in English, Spanish, Italian, German and French. 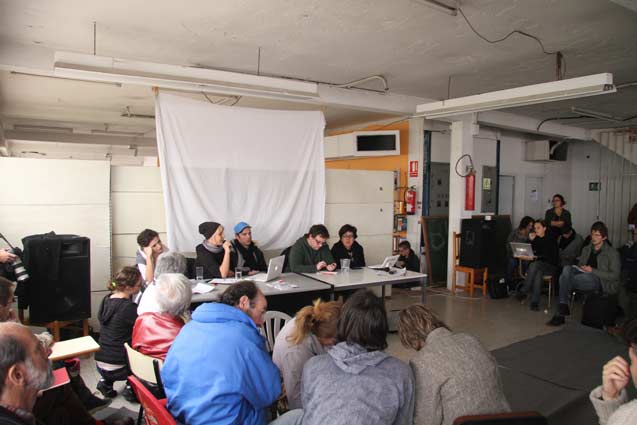 Hundreds of people gathered in the drafty third-floor meeting space, where an Agora flag hung from exposed rafters. Each axis was given time to present their declarations. The debt axis presented and read, “debt has proven to be the most powerful domination tool of the capitalist system.” The democracy group read, “We need a new people’s sovereignty and a constituent process, and by this we don’t mean constitution.” There was a very clear sense that debt was the problem and direct democracy was the solution. 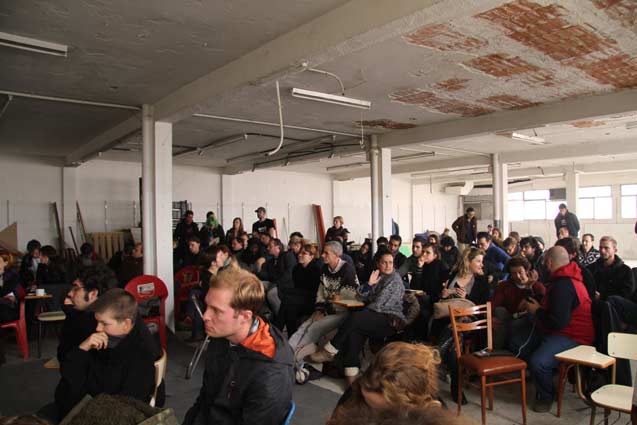 Upon returning to New York I was able to reflect on the state of the movement and how this moment came to be. In the U.S. and Europe the language of debt and democracy had been building for some time.

In May 2012, Strike Debt formed from people engaged in Occupy Wall Street and the Student Debt campaign in New York City. Hundreds of people gathered in open assemblies held at Washington Square Park and discussed the formation of a debt resistance movement.

On September 17, 2012 (the first anniversary of Occupy Wall Street), Strike Debt has issued the DROM (Debt Resistors Operations Manual), aimed at education and outreach. The introduction states, “To the financial establishment of the world, we have only one thing to say: We owe you nothing. To our friends, our families, our communities, to humanity and to the natural world that makes our lives possible, we owe you everything. Every dollar we take from a fraudulent subprime mortgage speculator, every dollar we withhold from the collection agency is a tiny piece of our own lives and freedom that we can give back to our communities, to those we love and we respect. These are acts of debt resistance.” 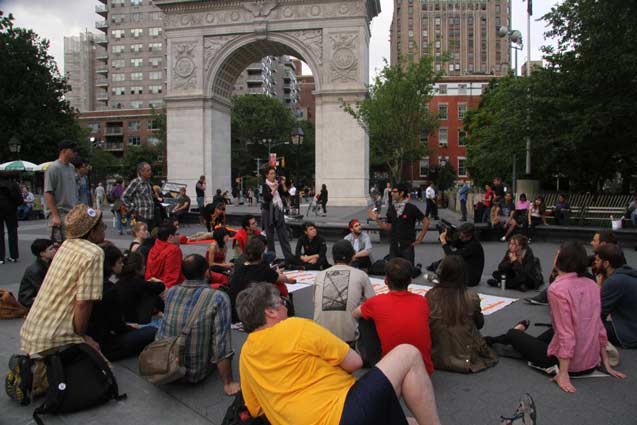 In March 2012, the Citizens Debt Audit Platform (PACD) began at a conference in Madrid. Activists gathered to decide on core principles and a roadmap for action. They decided on the slogan, “Don’t Owe! Won’t Pay!” The following month the ICAN (International Citizens Debt Audit Network) was formed to increase communication in primarily Europe and the Mediterranean. Now, there are dozens of groups working around debt in Spain, Portugal, France, Belgium, UK, Greece, Egypt and Tunisia that are connected and building solidarity.

Emma Aviles from PACD Barcelona, an ICAN member, wrote to me and described the group as ” a de-centralized network of activists aimed at exposing evidence of the illegitimacy of debt and calling for the nonpayment of all illegitimate debts, as well as denouncing the financial and economic system that is at the origin of this crisis, in order to advance together toward a change of the social, economic, political and human system.” The question of what makes a legitimate or illegitimate debt is not easily answered, for it varies depending on the context. Aviles said that illegitimate debts are those that “have a negative impact on the well-being of the citizens or the violation of their economic, social and cultural rights.”

This idea is not new. It predates the 15M and Occupy movements and, at its most basic level, is an idea as old as debt itself. Nick Deardon of the Jubilee Campaign in the UK, a member of the ICAN network wrote to me, “A jubilee is an ancient concept; every so often ancient monarchs in Mesopotamia would cancel the debts of their subjects. They realized if they didn’t do this, debt would go on getting bigger and tearing the structure of society apart. Peasants would have to sell their fields and families to pay the debts. Wealth and power would become concentrated. A jubilee returned the ancient economy to a kind of equilibrium and made amends for the injustice debt had caused.”

It is also not new to talk about debt in the context of neo-liberalism. In addition to the many anti-colonial struggles around debt, there has been international solidarity. For example, CADTM (The Committee for the Cancelation of Third World Debt), another ICAN member, started doing debt solidarity work in the early 1990s and continues to this day. Jerome Duval of CADTM wrote to me, “we try to link each struggle to debt liberation, but we want to go further than debt cancellation and suggest a radical change of the ‘debt system.'”

What is new is the context of the global financial crisis and the new movements that have come about. They are breathing life into an old idea. Strike Debt continues to build their network. Most recently, the group took on the “rolling jubilee,” which launched with a cabaret-style telethon called The People’s Bailout in which people donated money to abolish personal debt. The project to date has abolished over $100,000 in medical debt, and is still going strong. Inspired by the DROM and Rolling Jubilee, dozens of Strike Debt affiliated groups have sprung up around the US forming their own assemblies.

The ICAN members are auditing their governments and financial institutions to evaluate illegitimate debts. The network is planning for a convergence in Greece in January, as well as a meetup at the World Social Forum in Tunis in March.

The 99% are all debtors, whether they live in an indebted country or hold personal debts. We are all affected by the debt system. A global crisis calls for global debt resistance and an embrace of direct democracy. It is a logical progression for 15M and the Occupy movement to make.

The 1% is betting against our future. If we are to have a world that is humane and just, and, really, to have a world at all, we must act democratically in the present and open the space for radical imagination. It is a battle for the future, and the 99% must win.

Share
Copyright, Truthout. May not be reprinted without permission.
Marisa Holmes