It’s been obvious for a while that Jeb Bush is toast. Recently, however, he became French toast: After making a crack about French workweeks that was completely wrong, the Republican presidential candidate apologized for the mistake.

Fool! As National Review made clear, real men don’t admit to, let alone apologize for, errors: “Apologizing to the French will not score Bush any points with the G.O.P. primary electorate,” John Fund, the magazine’s national-affairs correspondent, wrote. “It may show he is a gentleman, but it also shows he lacks the killer instinct of his father and brother when they ran for president.”

But in truth the French deserve an apology from a lot of American politicians and commentators. If you think that France is a nation where everyone is either lazy or unemployed, compared with hard-working America, you’re not just repeating a caricature, you’re repeating a caricature that’s been out of date for many years. The French do take more vacations than Americans do, but in their prime working years, they’re a lot more likely to be employed than we are (see the chart). 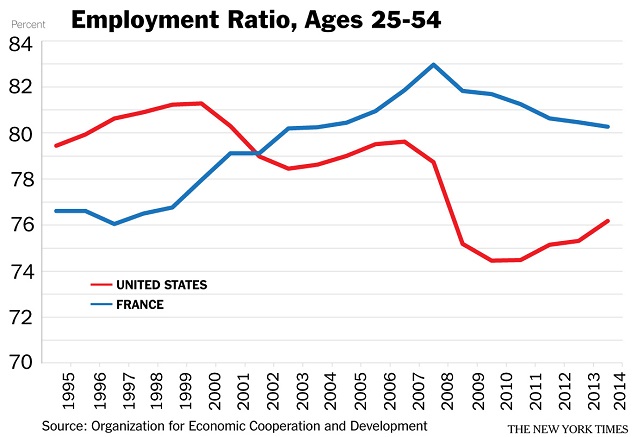 Whenever I mention this fact, I get mail from people who insist that I must be wrong and demand a correction. And even well-informed commentators seem to be underinformed on this point. For example, Justin Fox – while not wrong in what he wrote in a recent Bloomberg column on entitlement spending – doesn’t seem aware that France’s lower overall labor force participation is entirely the result of early retirement and lower employment among the young, which in turn partly reflects students not having to work while they’re in college.

Of course, such employment success isn’t supposed to happen in countries with generous welfare states like France’s. And to be fair, the chart here may reflect American failure as much as it does French success. Still, people should know that their image of France, and Europe in general, is really, really wrong.