So, American voters have spoken and set the nation firmly on the path to destruction, according to the evangelist Franklin Graham — God’s wrath for gay marriage, you know. So we can relax a bit on that front and turn our attention back to Europe, which remains, as the economist Tim Duy says, very grim.

“We are now looking at another year of dismal growth in the euro zone,” Mr. Duy wrote in a recent blog post. “This crisis seems to have no end in sight.”

Europe has been out of the spotlight for a while, partly because of the election focus in the United States, but also because the acute financial strains have abated a bit. The European Central Bank’s apparent willingness to buy bonds has combined with what looks like a surprising willingness of peripheral economies to accept even more austerity; the result is smaller bond spreads and less immediate risk of meltdown. But the macroeconomics of austerity and internal devaluation haven’t gotten any better: Unemployment is still rising fast, and at some point the strain will just be too much to take.

And I think it’s worth pointing out that this isn’t just a Greece/Spain issue. If you look at the euro area as a whole, it has in effect been following drastic fiscal austerity with no offset on the monetary side.

On this page, from the International Monetary Fund’s Fiscal Monitor, is one measure of the overall fiscal stance for the euro area, the cyclically adjusted primary surplus (that is, what the budget balance ignoring interest payments would be if the economy weren’t so depressed). That’s a big move toward austerity — 1937 big. 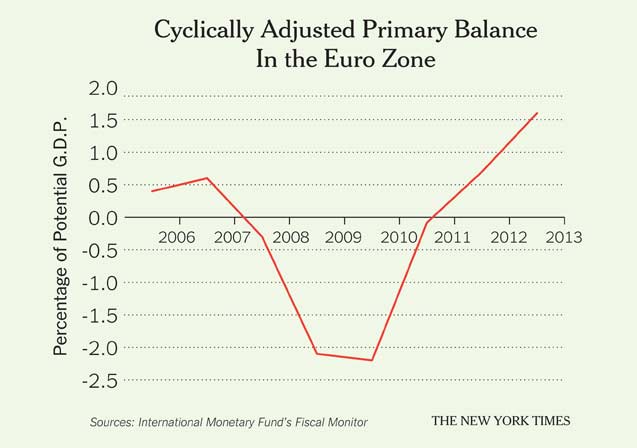 And as I said, not at all offset by anything on the monetary side. And Europeans wonder why the economy is in trouble.

Oh, and just to make things perfect, the European Commission is hitting back at the I.M.F. over austerity and reaffirming its faith in the confidence fairy.