Fifteen people were arrested Sunday afternoon after locking down the intersection of Wacker and Michigan to protest a police tactical officers’ conference happening in suburban Hoffman Estates.

Activists blocked traffic for nearly 90 minutes by chaining themselves together with lockboxes, tubes wrapped around their arms made of pipe, duct tape and metal wiring. Several dozen flanked the sidewalks on each side of the intersection, chanting “No borders, no pipelines, no prisons or police,” and “cops, SWAT & soldiers, do yourselves a favor, stay the fuck away from our Muslim friends and neighbors.”

The Illinois Tactical Officers Association Conference, which began Sunday and runs through Thursday, is a convention which brings together SWAT officers, emergency medical technicians and other first responders from Illinois and beyond for a week’s worth of training sessions and an expo featuring the latest in military hardware that’s become increasingly commonplace in police departments. Its keynote speaker this year is Sebastian Gorka, a counterterrorism expert and right-wing ideologue, who’s frequently used Islamaphobic and xenophobic rhetoric in public appearances. Gorka has also consulted for the Donald Trump campaign.

The conference’s top corporate sponsor is the Safariland Group, an umbrella group of companies that make hardware, body armor, tactical gear and “less than lethal” weapons, which have been used on civilian populations both abroad and in America in places like Ferguson. 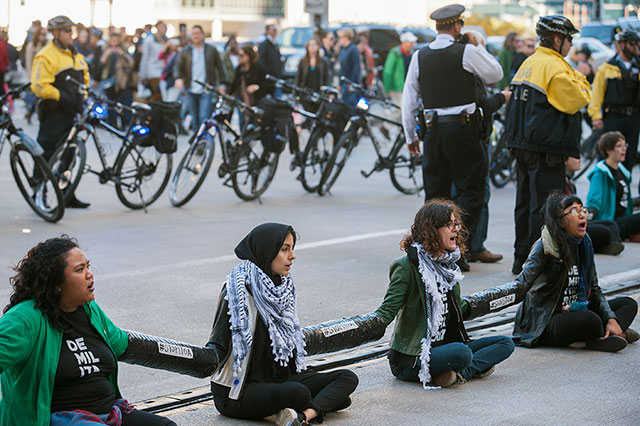 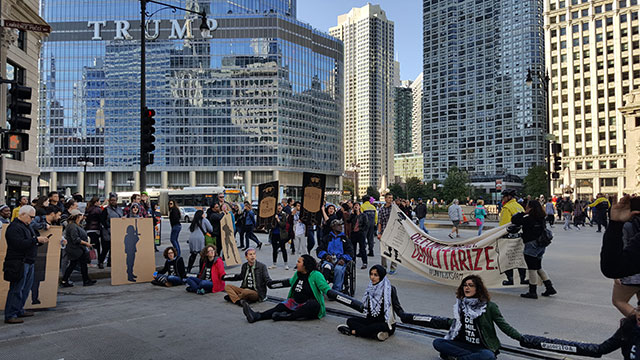 Activists and numerous community groups under the banner “StopITOA” say the conference promotes the wider militarization of police, which takes away resources from already struggling communities, further escalates already tense and many times violent situations, and targets communities and people of color.

“These conferences are spaces where oppressive institutions come together to collaborate to literally target violence against marginalized communities—Muslim communities, black communities, trans communities both here and abroad,” said Sofia, an organizer with StopITOA, who did not give her last name. “It affects all marginalized people.”

“Police militarization conventions and SWAT trainings are happening 365 days a year, all over the world. In the United States, they are where the arms industry meets law enforcement and emergency response, with the federal government footing much of the bill,” said Skanda Kadirgamar of War Resisters League. “This is why we are coordinating nationally, across communities and issues against this drive to constantly militarize police repression.” 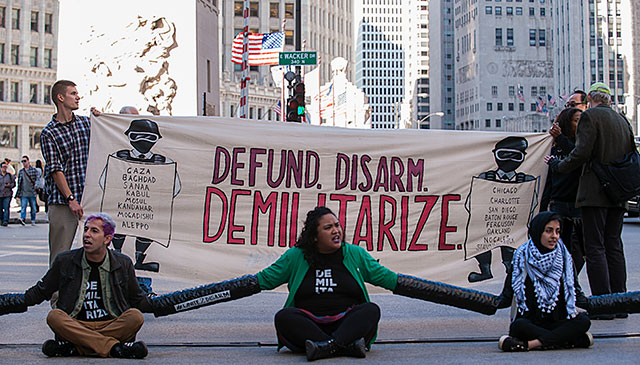 While the conference is taking place in the north suburbs, organizers say that choosing Chicago over Hoffman Estates makes their protest more visible, as conferences like ITOA frequently happen out of the public eye and go unnoticed. The also criticized how police officials have opted to increase manpower and hardware in marginalized neighborhoods that are starved for basic resources such as education and mental, health, and other social services.

“If you’re looking at CPS the past few years, the amount of public schools that have been shut down, ITOA has been using these empty schools as training sites,” Sofia said. “It’s not only where the money is going, it’s emptying out places for violence to take place. It’s putting all that money into thousands of new cops that will be hired in the city and not putting it towards social services. Right now the money is being put towards every violent solution to every problem, which is not really a solution for people who are marginalized.”