© 2023 Truthout
Graphic Journalism
|
Environment & Health
Where There Is No Water: Detroit’s Ongoing Crisis

Welcome back to Truthout’s long-running comics journalism series, formerly known as Ladydrawers. We’ve decided to just continue as Anne and Melissa for now, and we’ve made some other changes, too. Anne moved to Detroit last May, and Melissa agreed to be the sole collaborator on the strip, which will focus this season on water, land and housing in Michigan. Not only are these local concerns little understood throughout the rest of country, but they seem to predict with alarming accuracy pending crises in other communities.

You will remember a few years back when Detroit’s water shut-offs hit national news. Few understand, however, that shut-offs — with no transparency, and despite activists’ and legislators’ efforts to implement affordability plans — had been ongoing since the turn of the century. But in early 2013, Gov. Rick Snyder appointed an emergency manager to Detroit, Kevyn Orr, who seized control over the Detroit Water and Sewage Department (DWSD). Only days later, a $5.6 million contract with Homrich Wrecking to ramp up shut-offs of supposedly delinquent accounts was signed, in a stated mission to resolve an unpaid balance of $142.5 million. Approximately 15,000 residential customers — predominantly Black Detroiters living in poverty — lost water service then, for missed payments of as little as $150. Meanwhile, most of the delinquent commercial and industrial taps stayed on, despite the 40 worst past-due accounts totaling $9.5 million.

Nicole Hill — full-time student, single mother and now a staunch advocate for the right to affordable, safe water — was among the city’s residents who lost service during this time. This is where our story begins, almost three years ago, but it’s by no means where the Michigan water crisis ends. In fact, Detroit News uncovered documents last fall that reveal that DWSD’s contract with Homrich has been extended four times and more than doubled in cost. Now ending this June, Homrich is on track to shut off another 22,000 residential accounts this spring, for a total payout of $12.7 million. We’ll go in-depth into what this means in the coming months for water advocates, for land rights, for safe and affordable housing in a rapidly changing city — and of course, for you, wherever you may be in the world. On a more personal note, Melissa and I are pleased to be back at our respective writing and drawing desks for Truthout, especially after meeting so many of you in person on tour with Threadbare. We can’t wait to bring you more stories of the brilliant folks offering vigilance and justice in these trying times, and hope you’ll join us here, every month. 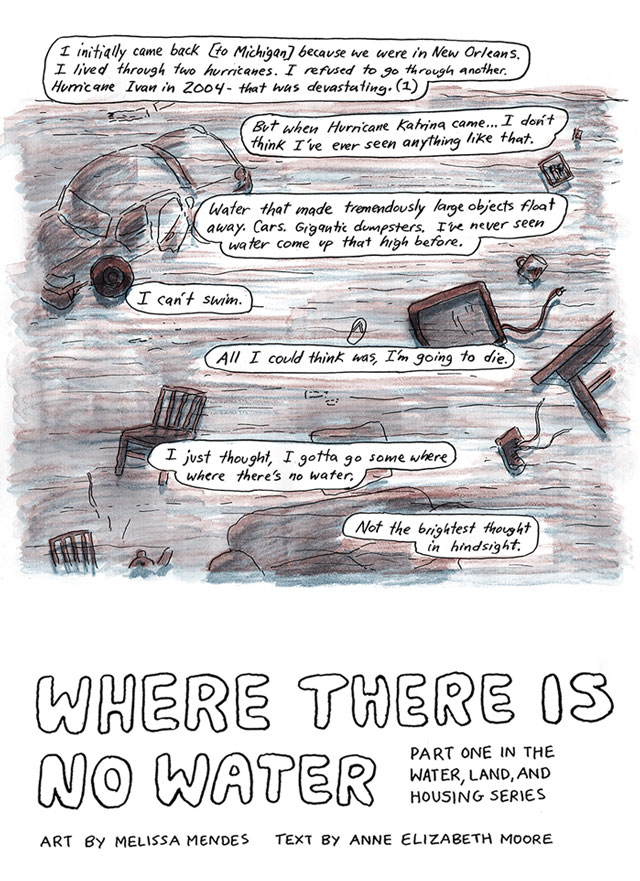 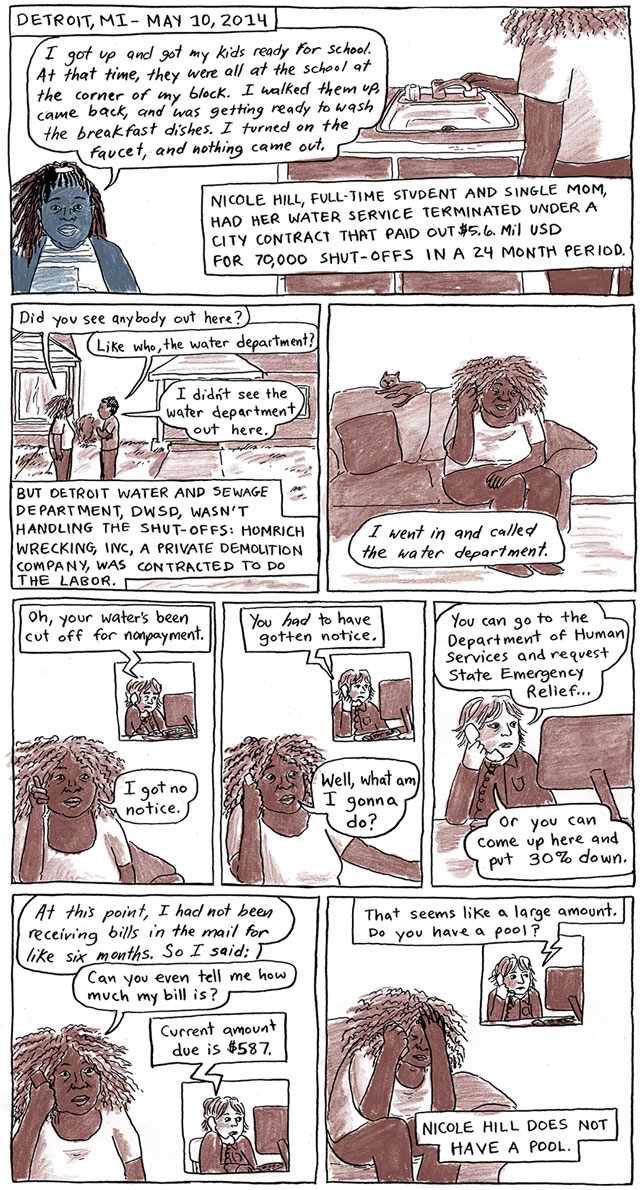 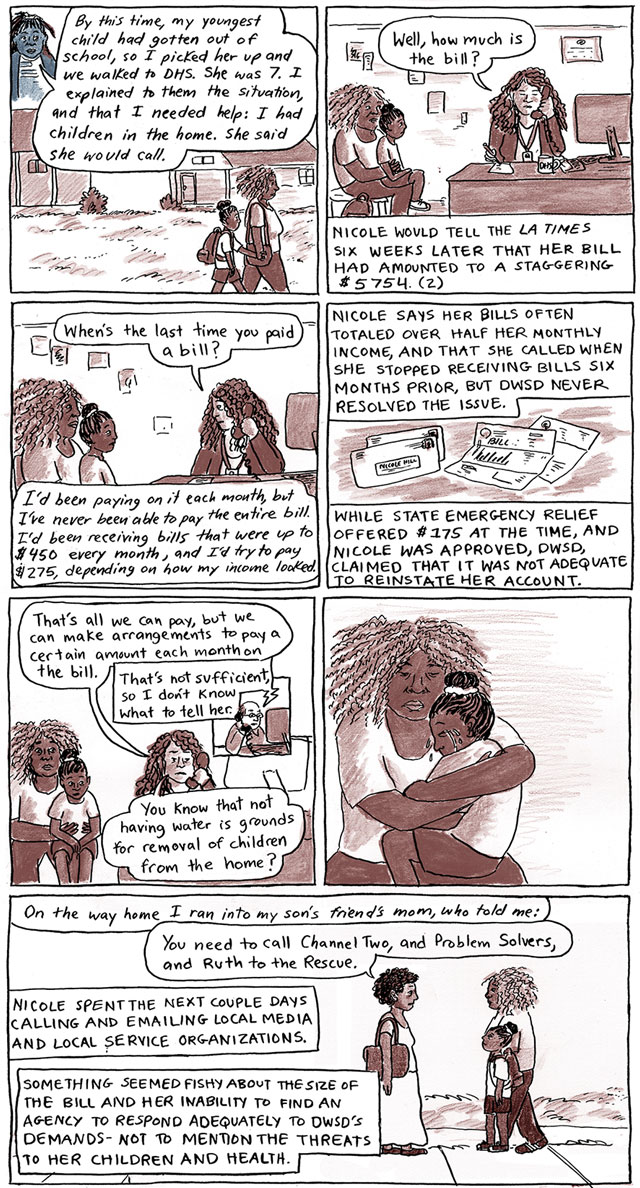 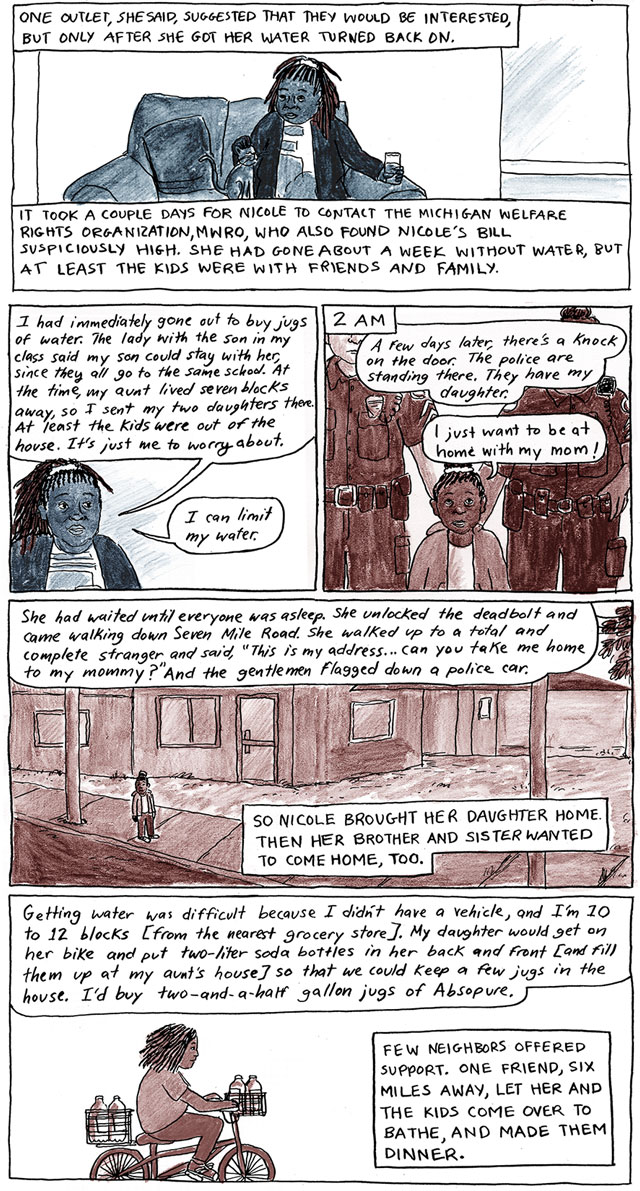 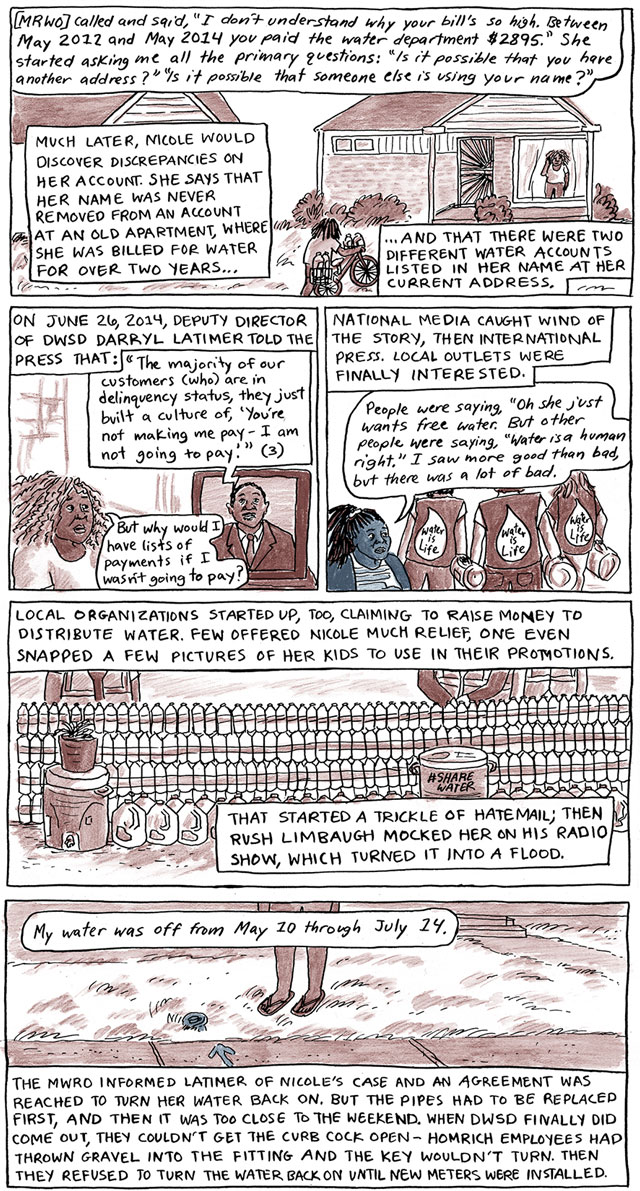 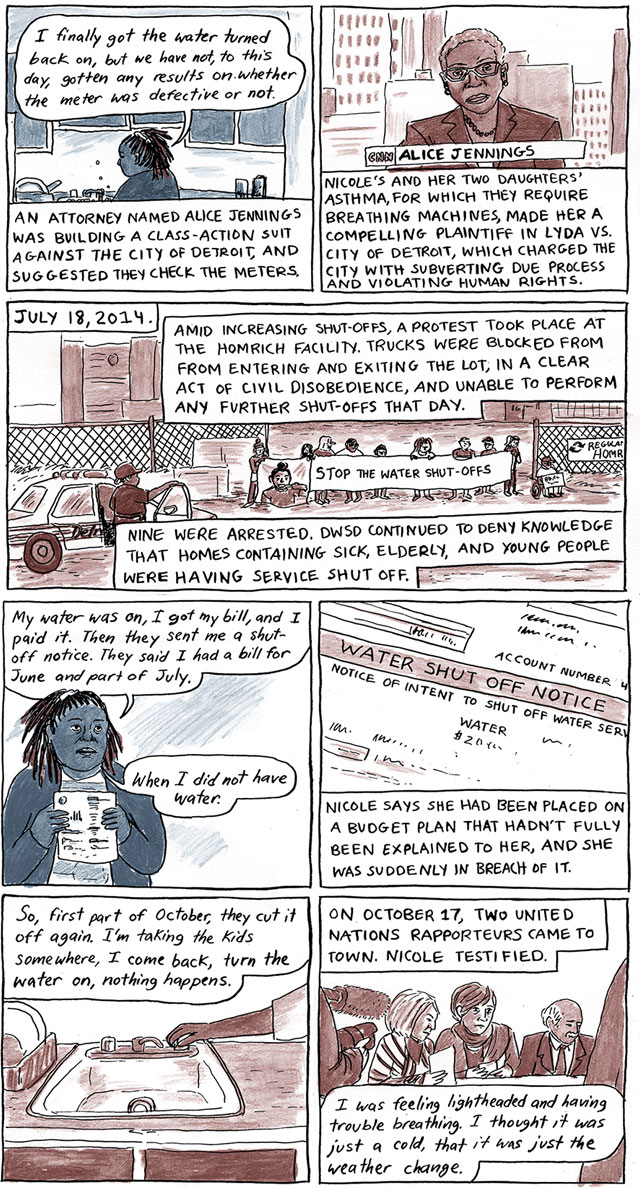 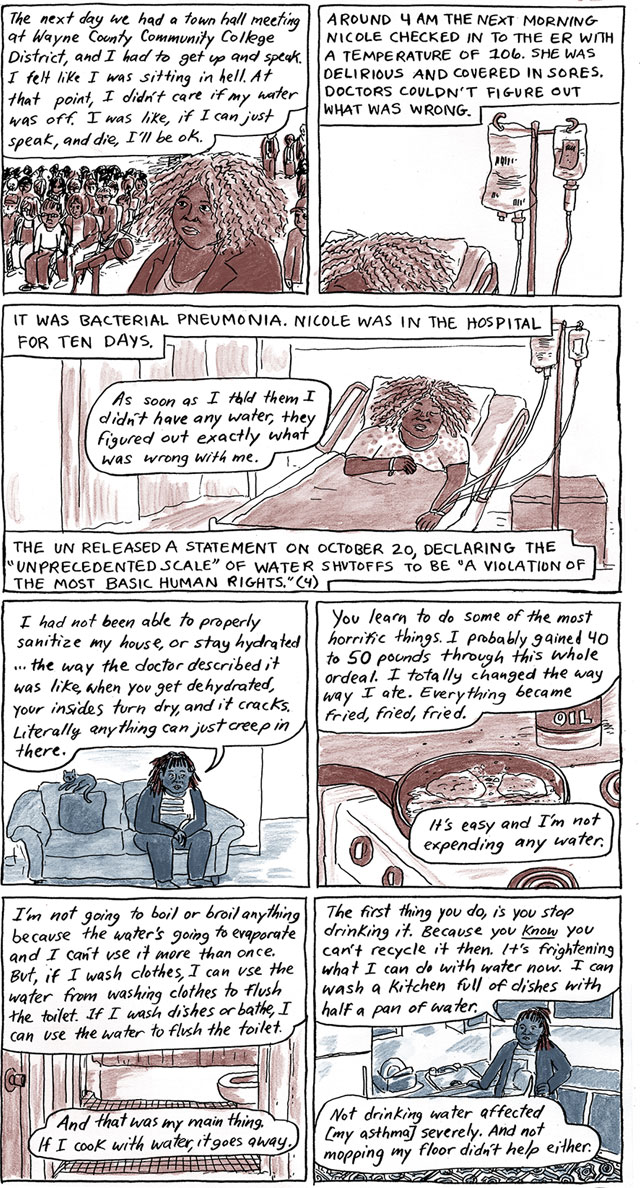 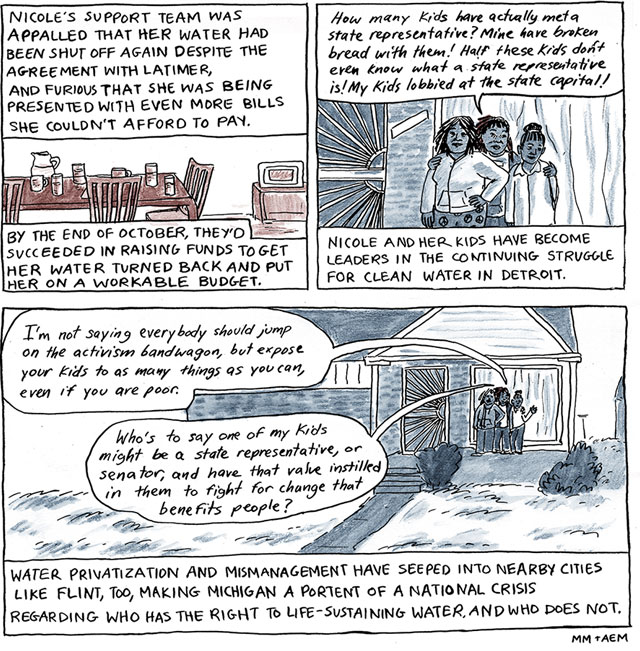 Share
Copyright, Truthout. May not be reprinted without permission.
Anne Elizabeth Moore