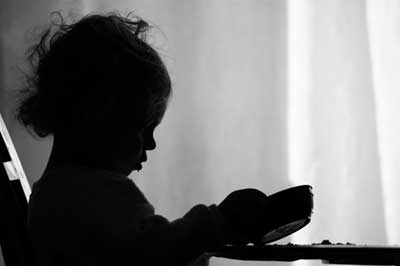 (Image: Hungry child via Shutterstock)ThTje Tt“Welfare” is a loaded word in the political arena (and is often politically used as an emotionally explosive term to include all government financial support, including food stamps, Social Security disability payments, aid to dependent children, Medicaid, school lunch programs, etc.). It means different things to different people. To some, it may mean the well being of those who have fallen on hard times. To others, it may mean people who live off government money and services of any kind, but are unworthy of the generosity of the American taxpayers.

Since the rise of Ronald Reagan, the political right in the United States has used the social safety net as a code to suggest minorities including African-Americans, immigrants, unwed mothers – all of whom are painted as constituencies unworthy of government assistance. The reality, however, is that poor whites use the social safety net system (which includes far more than aid to dependent children) far more than any other group. But because politicians have used government assistance programs as a political wedge issue, poor whites have been not so subtly assured that they are not part of that “unworthy” class; that if they receive government aid, it’s because they have “earned” it.

On this “Truthout Interviews,” I had a chance to speak to Mark Karlin, Editor of Buzzflash at Truthout, about an article he penned spotlighting the way in which many poor to middle class whites view government financial support when they are its recipients. Facts, figures, and reason are often at odds with emotions like anger and resentment – and so it goes on the subject of the social safety net. In this discussion, Mark and I talk about why, during this time when the middle class, working class and poor are losing economic ground, appeals to emotionally charged terms like the all-embracing connotative term “welfare” (or food stamps and other government programs) are politically useful in getting people to vote against their own economic interests. The sad irony is that in the long run, these political tactics do more to redistribute wealth to the top 10 percent of income earners in the US – while the 90 percent continue to lose economic and political ground.