A little over a year ago former Secretary of Defense Donald Rumsfeld came to Boston for a speech and was greeted by crowds demanding his arrest. In these pages and others I reported:

“Former Secretary of Defense Donald Rumsfeld has been stripped of legal immunity for acts of torture against US citizens authorized while he was in office. The 7th Circuit made the ruling in the case of two American contractors who were tortured by the US military in Iraq after uncovering a smuggling ring within an Iraqi security company. .. The ruling comes as Rumsfeld begins his book tour with a visit to Boston on Monday, September 26, and as new, uncensored photos of Abu Ghraib spark fresh outrage across Internet.”

It turns out that Rumsfeld not only knew about the worst of the worst abuses of the Bush Torture Era, including what was happening at Guantanamo, in Afghanistan, and at Abu Ghraib. He perhaps even ordered it. Memos with comments in Rumsfeld’s own handwriting in the margins said things like “I stand for 8—10 hours a day. Why is standing limited to 4 hours?”

This was in response to individual torture reports detailing prisoners made to stand for long periods of time. Since the human body fails after standing for extended periods, and crumples to the floor involuntarily, other measures might have been necessary to make them stand. Like chaining them to the ceiling.

At the time, the commander of US forces in Afghanistan, General Daniel McNeill, said that “we are not chaining people to the ceilings.” Contradicting him in the case of an Afghan named Dilawar, Spc. Willie Brand, told Scott Pelley on 60 Minutes: “he’s lying.”

Dilawar died in custody, his arms dislocated, and, in the words of the National Catholic Reporter, flapping uselessly “like a bird’s broken wings.” According to an investigation, Dilawar had been beaten so savagely about the knees, a form of torture known as “peroneal strikes,” that his knees were “basically pulpified,” in the words of the military coroner. Dean Lawrence Velvel of the Massachusetts School of Law states that peroneal strikes were “acts of torture and abuse that were regularly practiced on order or authorization of this country’s highest officials.”

The Army later affirmed that Dilawar was completely innocent of any wrongdoing. His crime was to be driving his taxi past Bagram AFB on the afternoon after a rocket attack. He was out to make a little gas money before picking up his three sisters, as his mother had told him to, for the local holiday. 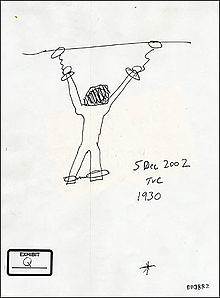 But when Rumsfeld came to Boston, instead of arresting Rumsfeld, police arrested a protester named Shaun Joseph. In the edifice that is the rule of law and simple humanity, Rumsfeld smashed the furniture, broke all the glassware, and spray-painted the walls. Yet it is Joseph who is charged with being “disorderly.”

Joseph has a court appearance this Thursday and Friday in Boston, March 7 and 8. Supporters will join him and seek support from across the nation.

Unlike with Rumsfeld, there is no evidence that Joseph engaged in the disorderly conduct with which he is charged. In fact there is evidence quite to the contrary. Hence the invitation by his supporters to find the (invisible) “karate chop” at an arresting officer while “resisting arrest” in the video above.

Like a good American, when Shaun Joseph heard Rumsfeld would be in Boston, he joined the crowds demanding his arrest. But he wound up getting arrested himself.

In Joseph Heller’s classic anti-war novel “Catch 22” a World War II airman waits in agony as sirens approach his apartment in Rome. He has just killed a prostitute. He is sure he is finished. But when the MPs burst into the apartment, they arrest not him, but another man, for being AWOL. It is just such a gruesome, Kafkaesque inversion of the moral universe we are witnessing with the persecution of Shaun Joseph, while Donald Rumsfeld walks the streets.

Binyam Mohamed was seized by the Pakistani Forces in April 2002 and turned over to the Americans for a $5,000 bounty. In a “black prison” in Morocco he was also hung from the ceiling as he watched an interrogator approach him with a scalpel, and proceed to make cuts in his genitals. He wrote in his diary:

Later, when a US airplane picked me up the following January, a female MP took pictures. She was one of the few Americans who ever showed me any sympathy. When she saw the injuries I had she gasped. They treated me and took more photos when I was in Kabul. Someone told me this was “to show Washington it’s healing”.

So the obvious question is, who is “Washington,” in the MP’s words? “Washington” usually refers to the highest levels in the civilian command, as opposed to the Pentagon, which is in Virginia. Binyam was never charged with a crime, and was later released to his home country, the UK.

It is not too late for the Suffolk County DA to arrest Rumsfeld. Any prosecutor has the authority to issue a warrant for arrest when he has overwhelming evidence that a crime has been committed, and a suspect. Torture was, and is, a violation of both US and international law. The Abu Ghraib photos, both the old and the most recently released, revealed a house of horrors that no one could have ever imagined.

Figures as high as former Secretary of State Colin Powell’s Chief of Staff, Col. Lawrence Wilkerson, and General Janis Karpinsky, commander of Abu Ghraib’s military police, have declared themselves willing to testify in any trial of Rumsfeld. Of the facts surrounding the murder of the 22-year-old Afghan farmer and taxi driver, Dilawar, Col. Wilkerson stated in an affidavit to the US District Court for the District of Columbia: “I am willing to testify in person.”

Boston protester Shaun Joseph has been offered a deal by the Suffolk County DA, which would allow him probation with no jail time in return for a plea of guilty. Joseph has refused, saying “I refuse to be put on probation for crimes I did not commit.”

In his description of the incident, Joseph says:

While attempting to begin a rational discussion with a police officer who was forcibly pulling a bullhorn from a comrade’s hand, I was seized without warning from behind by a police officer, thrown into the street, handcuffed, and taken to jail. Like most people who are assaulted by the police, I was charged with “assault and battery on a police officer” and “resisting arrest.”

The arresting officer, Sgt. David L. O’Connor, alleges that Joseph used a “karate chop like manaveur [sic]” on him. In the video above, see if you can find a karate chop. Look hard, as the prosecutor undoubtedly has. The question is, why is it so easy for us to not see what we don’t want to see?

DROP THE CHARGES AGAINST SHAUN JOSEPH. ISSUE A WARRANT FOR THE ARREST OF DONALD RUMSFELD.