For decades, the United States has supported Saudi Arabia despite that country’s record of human rights abuses and working against American interests. What explains this alliance that has endured across multiple US presidential administrations? Fearless firebrand Medea Benjamin tackles this question in her new book Kingdom of the Unjust. Get it now by making a donation to Truthout!

The following is the Truthout interview with Medea Benjamin about Kingdom of the Unjust: Behind the U.S.-Saudi Connection.

Mark Karlin: Isn’t Saudi Arabia, in many ways, an oligarchical extension of the US economy? Yes, it is a monarchy, but democracy hasn’t exactly put the brakes on the development of an oligarchy in the US. I keep thinking of that infamous photo of George W. Bush, walking pinkies intertwined, with a Saudi royalist when Bush was president.

Medea Benjamin: The Bush family certainly had a cozy relationship with the Saudi rulers — oil men to oil men. The former Saudi Ambassador to the US, Bandar bin Sultan, was so close to the Bushes that he was known as Bandar Bush. But I wouldn’t call Saudi Arabia an extension of the US economy; more accurately, both economies are key players in a global capitalist economy propelled by planet-destroying fossil fuels and weapons. Whether the US version with a multiparty system with elections, or the Saudi version of a theocratic monarchy, both economies are in the hands of elites who benefit at the expense of the people and planet.

Speaking of democracy, doesn’t the tight US relationship with Saudi Arabia exemplify that our foreign policy is about US economic interests and not the spread of suffrage and equality?

If US foreign policy was really about spreading equality and democracy, our government would certainly not be allied with countries like Saudi Arabia, Egypt and Israel. Yes, economic interests are primary, but the economic interests of the 1%. It is not in the interests of the Saudi or US public to have an economy so reliant on oil and weapons, but these huge sectors have powerful lobbies that distort our policies. And now that the Saudis have used their huge profits from oil sales to invest in the US economy, they can — and have — blackmailed the US government. When Congress was voting to give US victims of the 9/11 attacks the right to sue the Saudi government in US courts, the Saudis threatened to withdraw $750 billion from the US treasury and other assets.

What is the current status of women in Saudi Arabia?

People might know that Saudi Arabia is the only country in the world where women can’t drive. But even more egregious is the guardianship system. While Saudi women have made great gains in terms of education and more and more women are entering the workforce, under the guardianship system, a woman, no matter her age, is treated as a minor and must live under the supervision of a wali, or guardian. This is a legally recognized male — her father, husband, uncle or some other male relative (even her son) — who must grant formal permission for most of the significant issues affecting her life. Women are not allowed to marry, obtain a passport, or travel without the permission of their guardians. Some Saudi women refer to this system as a form of gender apartheid and see it as the foundation of their oppression. 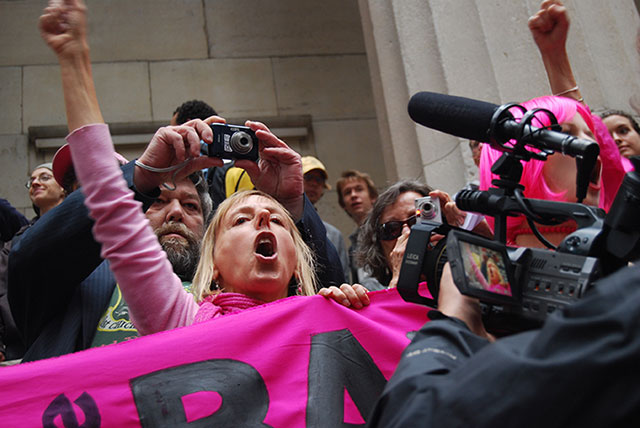 Author Medea Benjamin was co-founder of Code Pink and is still a tireless advocate for justice. (Photo: Thomas Good)

You have a chapter entitled, “Spreading Wahhabism, Supporting Extremism.” For those of us who have covered US relations with Saudi Arabia going back to before 9/11, it appears pretty clear that the US has swept Saudi involvement at various private and public levels of supporting terrorist groups under the rug. Is that one of the prices we pay for access to their oil reserves and economic cooperation?

Yes, US officials privately complain about Saudis spreading extremism, but then give them diplomatic cover. A WikiLeaks-revealed 2009 cable quotes then-Secretary of State Hillary Clinton as saying: “Donors in Saudi Arabia constitute the most significant source of funding to Sunni terrorist groups worldwide…. Saudi Arabia remains a critical financial support base for Al Qaeda, the Taliban, Lashkar-e-Tayyiba and other terrorist groups.” But what did Hillary Clinton do about this as Secretary of State? She authorized massive weapons sales to the Saudis worth tens of billions of dollars.

You report as corroborated, what has been circulating as speculative news for some time, that Saudi Arabia and Israel have been unofficially developing at least a modest intelligence, military and strategic relationship of sorts. What is behind this rather chilling development for the Palestinians in particular?

On the surface, it would seem that Saudi Arabia and Israel would be the worst of enemies, as the two nations have no diplomatic relations and the Saudis have traditionally been strong supporters of the Palestinians. But beneath the surface, these two old adversaries actually have a lot in common, and many feel that the Saudis have turned their backs on the Palestinians by forging closer ties with Israel.

Both nations supported the military coup in Egypt, with the Saudis providing billions of dollars to General el-Sisi’s government. The coup has been disastrous for the Palestinians, as General el-Sisi, on Israel’s insistence, closed the Egypt/Gaza border, which was the only way most Palestinians were able to transit.

But the major bond between the Saudi and Israeli rulers is their mutual hatred of Iran. Both view Iran as an existential threat and fear Iran’s growing influence in the region. They both opposed the Iran nuclear deal and are determined to stop the United States from getting any closer to Iran. This is dangerous for the entire region since any political solutions will have to involve bringing all key players in the region together, including Iran.

Can you discuss an issue that I believe many of our readers find confusing. What is Saudi Arabia doing waging a war in Yemen, and how does this represent the advent of a hyper-factionalized Middle East?

Saudi’s intervention in Yemen is an extension of this hatred of Iran. The Saudis are worried that the Houthis, who rose up in Yemen, are close to Iran. Many of the conflicts plaguing the Middle East today have been exacerbated by the Saudi-Iran enmity. Saudi leaders see Iran’s policies as part of an expansionist, sectarian agenda aimed at empowering Shia Muslims in the region at the expense of Sunnis. Iranian leaders attribute similarly sectarian motives to their Saudi counterparts.

These divisions became more pronounced with the Arab Spring. As some regimes were toppled and others desperately clung to power, the Saudis and Iranians have continued to compete for influence and dominance. The Saudis have accused Iran of waging proxy wars in Iraq, Syria, Yemen, Bahrain, Kuwait, and even inside the kingdom itself, with the Shia minority. Iran viewed Saudi Arabia as destabilizing the entire Middle East. While some of the claims were false or exaggerated, both countries have had a hand in the regional conflicts. The Saudi intervention in Yemen, along with US military assistance, has only added to the region’s sectarianism and misery, and has cost thousands of innocent lives in Yemen.