Take, for example, commentary published Oct. 14 in the Financial Times examining how expected quantitative easing by the United States Federal Reserve lowered the value of the dollar against the Chinese renminbi and European currencies. The editors wrote: “A senior European policy-maker, who asked not to be named, said a further aggressive round of monetary easing by the United States Federal Reserve would be ‘irresponsible’ as it made United States exports more competitive at the expense of its rivals.”

In other words, this unnamed European policy-maker is essentially saying to the United States: How dare you act to protect your economy from deflation and double-digit unemployment? By doing so, you make our inappropriate austerity policy even more destructive!

This is a false equivalence, which is obvious if you think about the basics of this situation.

What the Fed is trying to do through quantitative easing, or releasing more money into the economy, is to foster an expansionary monetary policy and increase productivity in the face of a depressed economy and threats of deflation. What else can the United States do? Now, it is true that one effect of that 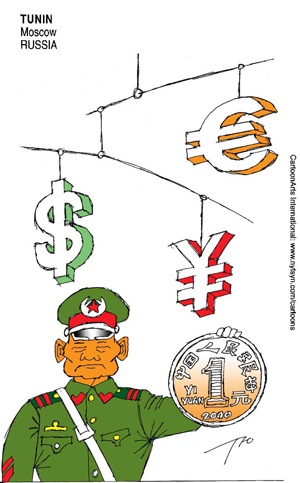 policy, if it isn’t matched abroad, is a weaker American dollar — but that is not the ultimate goal.

In fact, while the overall effect of quantitative easing in America is expansionary in the United States, the outcome is actually ambiguous for the rest of the world. Why? Because the weaker dollar tends to reduce the United States’s trade deficit, but then a stronger American economy tends to increase the deficit, so the net effect is uncertain.

Now compare this with China’s situation. First, China is pursuing a weak-yuan policy. And it is not fighting deflation; it is fighting inflation, so the undervaluation of its currency has to be accompanied by restrictive credit policies domestically. (As if to illustrate my point about the problems with this argument, China’s central bank increased interest rates on Oct. 19.) The overall effect of the latter move is therefore to reduce, not increase, world demand to protect China’s economy from overheating — and the overall effect of both policies on foreign economies is clearly negative.

The policies of these two nations are not at all equivalent.

The Fed is moving in the right direction, both in terms of American interests and for the sake of the world as a whole. China is beggaring its neighbors, which in this case means everyone else, and the world is worse off.

In mid-October, China’s central bank unexpectedly raised interest rates by a quarter of a percentage point. It was the first such increase in three years — part of an effort to encourage personal savings and stop prices from soaring.

While most of the world’s economies are trying to jump-start productivity and steer clear of deflation, which in some countries is causing declines in the prices of goods and services, China’s problems are of a different order. A decade of unprecedented high growth has pushed the nation into a so-called inflationary zone.

Food and property prices are rising rapidly in China, and wages are not keeping up. In September, the nation’s consumer price index — an inflation aggregate that weighs the average costs of goods — was up 3.6 percent compared to a year ago.

The rise is attributed mostly to escalating food prices, which have gone up by 19 percent over the last three years, and by 8 percent in September of this year alone.

So the rationale behind China’s interest rate hike was simple: Higher rates equal less spending, which means prices won’t be driven up further.

This should also help to cool the property market, which has been overheated by low interest rates and investor speculation. Many investors had turned to real estate as a financial safe haven, not wanting to see their interest-rate returns eaten away by inflation.

The International Monetary Fund applauded China’s monetary tightening in October, and has gone so far as to call for more of it.

Chinese officials announced in June that they would begin to loosen controls over exchange rates, and through October the currency has slightly increased in value, by less than 3 percent. Still, economists contend the renminbi is undervalued by about 20 percent.

Mr Krugman is the author or editor of 20 books and more than 200 papers in professional journals and edited volumes, including “The Return of Depression Economics” (2008) and “The Conscience of a Liberal” (2007). Copyright 2010 The New York Times.