The Labor Department reported that the unemployment rate rose to 9.9 percent in April as 805,000 people entered the labor force. Even with the economy generating 290,000 new jobs according to the establishment survey, this was not sufficient to keep the unemployment rate from rising. The establishment data was revised up for March to show a gain of 230,000 for the month.

The job gains in April were broadly based. Manufacturing has turned around and is now a big gainer, adding 44,000 jobs in April after adding 19,000 in March. The direction is likely to continue to be positive, although probably at a slower pace in future months. Construction added 14,000, although this may just reflect erratic seasonal factors.

Employment services added 23,400 jobs continuing the growth in this sector that began in October. The rate of growth in jobs in this sector had fallen sharply, from 70,000 a month between October and January to an average 35,000 a month in the last three months. Health care added 20,000 jobs, almost exactly its average over the last year. The leisure and hospitality sector added 45,000 jobs in April after adding 41,000 jobs in March, with restaurants accounting for most of the gains. State and local governments shed 6,000 jobs. This job loss will almost certainly accelerate as these governments start to approach their new fiscal year in July.

The data shows that the new entrants to the labor market were overwhelmingly white men. They accounted for 72.4 percent of the growth in the labor force in April. The unemployment rate for white men rose from 8.9 percent to 9.2 percent, while it inched up from7.3 to 7.4 percent among white women. The unemployment rate for blacks remained at 16.5 percent even as their employment to population ratio increased modestly to 52.4 percent.

The length of unemployment spells continued to increase, no doubt in part because of the unusually long duration of benefits. As noted before, this likely affects the mix of the unemployed, not the number.

While this report came in at the high end of most expectations, it is still difficult to be very optimistic about the economy’s near term prospects. Pulling out the Census workers, the 224,000 pace of employment growth is about 100,000 more than is needed to meet the natural growth of the labor market. At this pace, it would take 80 months to make up the 8,000,000 jobs lost in the downturn.

There are also many trouble spots ahead. The trouble in Europe has strengthened the dollar, which will weaken exports. State and local budget cutbacks will be a substantial source of drag on the economy in the second half of the year. And house prices are falling again. 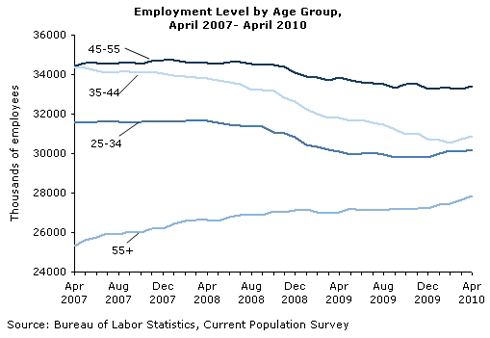 CEPR’s Jobs Byte is published each month upon release of the Bureau of Labor Statistics’ employment report. For more information or to subscribe by fax or email contact CEPR at 202-293-5380 ext. 102, or [email protected]

Truthout
Share
Nominal wage growth has averaged just 1.1 percent over the last quarter. The Labor Department reported that the unemployment rate rose to 9.9 percent in April as 805
War & Peace