Wisconsin’s Student Bill of Rights is a 43-point program written by high schoolers. Similar to the National Student Bill of Rights, it calls for student input in school decision-making; support for technology, arts, music and bilingual education; freedom from discrimination; culturally relevant learning; restorative justice in school discipline; and college counseling – and access – for all. Points 6 and 7 bring a Wisconsinite twist: “Students have a right to a school environment where all teachers and staff have the right to collectively bargain” as well as “a desegregated public education system that is not undermined by privatization.”

Youth Empowered in the Struggle

“I’ve gotten a lot of comments saying it was the teachers making the students write it,” says Karla De Jesús,17, from Milwaukee. “There’s a lot of discrimination. It’s so hard to believe that students are doing something.”

As students in Racine tried to get the bill encoded in district policy last year, the school board resisted. “They didn’t approve of it, because we were too political,” says Berenice Beltrán, 17, a Racine student “They said we were brainwashed.”

Wisconsin’s collective memory suggests otherwise. As the governor maneuvered to squash organized labor, the conversation percolated from news outlets to dinner gatherings to math and social studies lessons. “If you were in Milwaukee when Scott Walker was going into office,” says Kika Meráz, 19, a Milwaukee native who now attends Marquette University, “everyone knew what collective bargaining is, what privatization is.”

As most public sector unions lost between one- and two-thirds of their members, the group spearheading the bill, Youth Empowered in the Struggle (YES), exploded. Between 2011 and 2012, YES grew from 200 to 600 dues-paying members, with 15 chapters spread across high schools and universities in Milwaukee and Racine. Last April, students pushed the Milwaukee school board to approve the Student Bill of Rights in principle. Teachers, who now have to recertify their union every year and can no longer automatically collect dues, have turned to student organizers as allies in local and state-level struggles. Though Michael Moore and Tom Morello have left the capitol, and Scott Walker hasn’t been dethroned, the uprising continues – this time, in the hands of those with few rights to begin with. 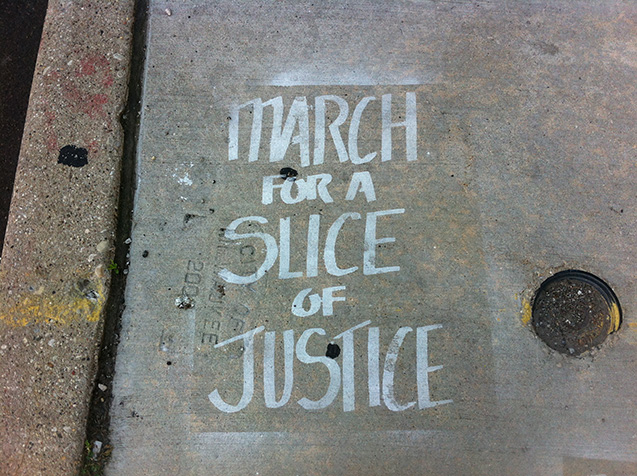 Milwaukee is the most segregated urban area in the country, with blacks mostly confined to the city’s North Side and Latinos to the South. The loss of manufacturing jobs has thrown people of color into disproportionate levels of low-wage work or unemployment.

The headquarters of Milwaukee’s Voces de la Frontera, YES’s parent group, are the “ER of the South Side,” a refuge for the city’s Latino community. Its meeting hall hosts citizenship classes, support groups for families with members who are detained or in deportation proceedings, voter training, youth organizing and worker organizing – including the ongoing Palermo’s Pizza strike. Its hallways are lined with photos from the 2006 Day Without Latinos and May Day marches since then. A state-shaped fist abuts “Stand with Wisconsin 2011.” Scott Walker’s face appears with the tagline, “I have seen the face of Democracy. This ain’t it.”

During the 2011 capitol occupation, students from Milwaukee and Racine, the state’s fifth-largest city with a combined 43 percent black and Latino population, bused to Madison every weekend. For the recall votes that followed, YES launched “Vote for Our Future,” a nonpartisan engagement campaign. Five hundred high school students, mostly younger than 18 and many bilingual, door-knocked in Milwaukee and Racine. In one day, the canvass tallied upward of 8,000 doors knocked and 3,500 voters who committed to go to the polls.

The assault on collective bargaining – and education funding – was a rap on students. “Many of us are first-generation students, and many of us are getting through school with the guidance of our teachers,” says Kennia Coronado, 19, a student at the University of Wisconsin–Milwaukee. “In the country where my parents are from, Mexico, teachers are respected.”

After students came to the capitol every week in spring 2011, teachers reciprocated. Since then, YES has found it easier to recruit adult chaperones for getting out the vote. In Milwaukee, teachers have hosted student-led professional development on social justice pedagogy. The Milwaukee Teachers’ Education Association recently created a full-time youth organizing position, which will support student organizing and conduct trainings for teachers. Now, many teachers are allies in the multi-city push for student rights.

Without a bill of rights, students are left with a disciplinary code. “What it basically is is a book that helps you get expelled from school and suspended,” says Rafa Diaz, 14, a high school freshman in Milwaukee.

The bill was written by YES with input from groups from Milwaukee’s predominantly black North Side, including Urban Underground, Youth Rising Up and Pathfinders. “We tried to narrow it down to three pages,” De Jesús says. “It was kind of hard because there are so many issues in these schools.”

In October 2011, 195 of 215 students at the bilingual ALAS High School walked out over district funding cuts and excessive school policing. In December, organizers held a youth summit at South Division High School to launch the bill of rights. By February, the bill was finalized.

The Racine and Milwaukee teachers unions immediately endorsed it. After 250 students packed a Milwaukee school board meeting in March – and 50 spoke – the district passed it in spirit, requesting revisions prior to full adoption. The Racine school board delayed putting the bill on the agenda until November 2012 – with a two-day window before voting. With the superintendent’s urging, the board voted it down.

This September, Racine students will try to implement it as part of the district’s triannual revision of the student code. Meanwhile, each of YES’s 12 high school chapters will take on one of the 43 rights for passage. 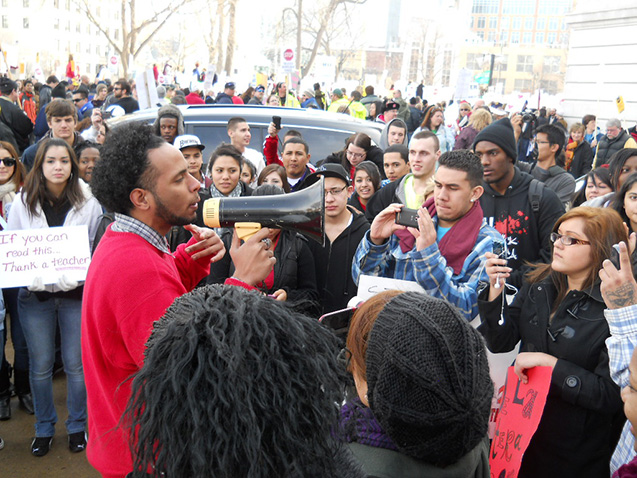 The new face of Wisconsin?

The Student Bill of Rights is a vehicle for struggle that transcends any set of formal rights. Separately, students have been working on implementing Obama’s Deferred Action for Childhood Arrivals, organizing with Voces against deportations and the state’s now-sidelined voter ID law and undergoing leadership training at Voces’s Freedom School.

For those without rights, building power doesn’t always come with an Arcade Fire soundtrack. As a youth organization, organizers confront standard challenges recruiting new members, engaging members who have moved on to college, winning respect from teachers and working with teachers and administrators without having to curtail their language or demands. In Milwaukee and Racine counties, students and teachers face an extra hurdle in accessing resources stipulated under the bill of rights with the explosion of voucher and charter schools under the pretext of school “choice.” Grassroots opposition is still materializing.

As student activists become more visible, they also carry targets on their backs. After Voces’s nonpartisan canvassing helped Racine surpass the surrounding county in voter turnout for the first time this fall, conservative shock jock Mark Belling took to his radio show to accuse the group of being “political.” Under pressure from conservatives, the United Way, the Racine Community Foundation and the Racine school district pulled funding from students’ Martin Luther King Day celebration.

In the national memory, these struggles are a sidebar to the Wisconsin Spring. On Milwaukee’s South Side, the uprising was the tip of a longer history of resistance.

“My mother would take me to May Day, and I would see the Latinos out in the streets and the messaging and marches around immigration,” says Coronado, whose mother was undocumented for 13 years after coming from Mexico. “As a Latina, and as a woman, I see many injustices.”

One cheer for Scott Walker. By provoking the Wisconsin uprising, he’s aroused the voice of resistance – and it has a future.

Share
Copyright, Truthout. May not be reprinted without permission.
James Cersonsky

James Cersonsky is a labor and education reporter and an editor at StudentNation. He directs an action research program connecting students with neighborhood history. Find him on Twitter @cersonsky.