The continuing protesting efforts in Ferguson are a constant reminder that democracy left unchecked is totalitarianism disguised as freedom and inclusivity. The protestors in Ferguson, who represent all walks of life, are protesting in defense of a mentality and ideal that is unable to conceive inequality and mistreatment as a normative function within American democracy. They understand that no American citizen should have to face differential treatment within a society that allegedly claims to be among the leaders of the world and yet is not whole. How could it be 2014 and yet, still, as a society, brutalization against Black bodies is tolerated and, in many cases, quickly justified by those who have yet to accept Blackness as their equal within the human family, let alone within American democracy. Yes, the problem is largely race-based, and America should accept this truth however hard it might be to fathom.

Many critics on this subject rush toward politically correct speaking points that overwhelmingly discount a truth that is knowable and historic. The politically correct orientation of Ferguson is one based in the fantasy of colorblindness. It attempts to shield the hard historical fact that policing in America has always been one of color/class-consciousness. Thus, American policing at its foundation is inherently protective of the status quo. Regarding Blacks, this reality dates back to plantation justice-a time within which Black bodies were brutality policed at the behest of White domination. Sadly, almost 400 years later, this would still be the dominant thinking behind policing the Blacks, whether known consciously or not.

Given the history of American social control and its relationship to Black bodies, there could be not a single question of doubt against the general inquiry of those in Ferguson-police accountability. America has long tolerated and justified the brutalization of Black bodies (even when the culprit is Black) and, because of this historic hard fact, it is hard to fathom how some are unable to conceive the possibility that police officers might be engaging in the same activity that was once legal or customary within American society. Police officers are not somehow disconnected from the broader American ethos as they too are socially conditioned and therefore susceptible to the biases, prejudices, and misperceptions that ought to be checked given the amount of power they hold over the lives of citizens.

The answer lies in the stark racial contrast regarding the value of life and how certain lives are legitimated to the detriment of others. An example of this contrast was eloquently and expectedly showcased at a Cardinals game where pro-Brown protestors were met face to face with an all-White crowd of pro-Wilson responders. Thus, the racial make-up of this incident speaks volumes to the impact that histories of racial control and exclusion have had on modern day social-racial discourses.

Why are people surprised by the fact that Black men, in particular, are the quintessential victim of police brutality and violence, again, given the history of brutalization in America? For example, a study published by ProPublica, recently found that Black teens were 21 times more likely to be murdered by police than White teens from 2010-2012 (see figure 1). Yet, most will inevitably fail to realize the deep importance of this study as it situates, clearly, the level of vulnerability that Blacks must still face in 2014. 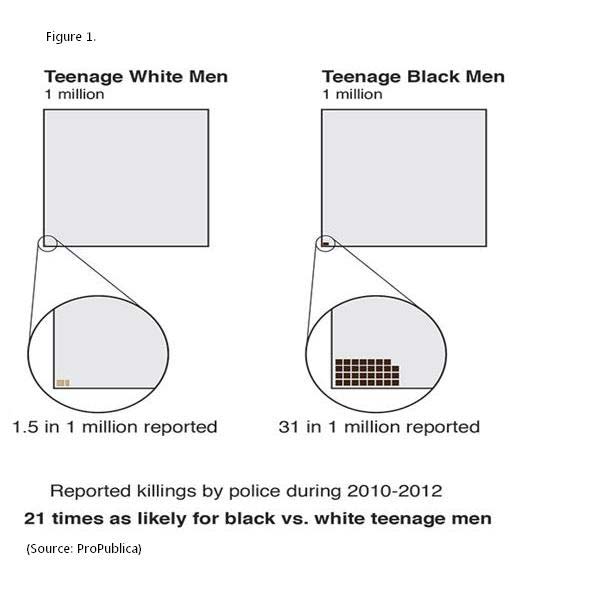 Moreover, the revelations noted in this study and many others like it, is what compels those in Ferguson to protest. The revelations in studies like these also give power to the significance of past histories; for example, the often quoted words of Chief Justice Taney in the United States Supreme Court Dred Scott decision regarding Africans:

“In the opinion of the court, the legislation and histories of the times, and the language used in the Declaration of Independence, show that neither the class of persons who had been imported as slaves nor their descendants, whether they had become free or not, were then acknowledged as a part of the people, nor intended to be included in the general words used in that memorable instrument…They had for more than a century before been regarded as beings of an inferior order, and altogether unfit to associate with the white race either in social or political relations, and so far inferior that they had no rights which the white man was bound to respect, and that the negro might justly and lawfully be reduced to slavery for his benefit. He was bought and sold, and treated as an ordinary article of merchandise and traffic whenever a profit could be made by it. This opinion was at that time fixed and universal in the civilized portion of the white race. It was regarded as an axiom in morals as well as in politics which no one thought of disputing or supposed to be open to dispute, and men in every grade and position in society daily and habitually acted upon it in their private pursuits, as well as in matters of public concern, without doubting for a moment the correctness of this opinion.”

Given the rampant amounts of blatant and hidden discrimination in the American administration of justice, how could anyone argue that Taney’s words are not as important today in reflexive contexts as they were when they were written? Like Mr. Scott, the protestors in Ferguson are asking for inclusion and the humanity of all to be respected. History serves as a constant reminder on the extent to which their simple requests have not been met, but when will this nightmare end? Moreover, how can America continue to be the mediator of world problems when it continues to ignore domestic issues like police brutality? It is the inconsistencies in American democracy that hinders US imperialism in the Middle East and beyond. Even before Ferguson the international community knew that the US does not always practice what it preaches.

One of the last bastions of pre-sixties white supremacy is, in fact, the criminal justice system itself. For instance, the use of the criminal justice system as a post-sixties tool of racialized social control begun with the state’s hampering down on resistance movements and groups in the ’70s and later with the war on drugs, which targeted Blacks. It is the ultimate tool because most people (especially the majority) do not question the law as a result of being taught to respect it at all costs. Thus, judicial mistreatment is justified via majoritarian trickery masquerading as justice. Also, people are taught that justice in America is colorblind, albeit easily debunked by decades of social science research. The result is a recipe for judicial deceit and betrayal because it complicates what is essentially in plain sight, at least to the non-majority.

Nevertheless, Ferguson is an excellent test case on which to examine race and criminal justice. For example, many pundits are arguing for better training, community relations, and the inclusion of people of color on police forces, all of which has been tried before with little difference. On the contrary, however, the solution is simply police accountability. Officers of color are equally guilty, at a lesser rate, though, of some of the same questionable behavior predominately exhibited by White officers. Therefore, more training and diversity, although probably useful, is not a panacea. Like Taney, rogue officers understand the Constitution very well, and they recognize that racial profiling and excessive force is inappropriate even though they choose (like any ordinary criminal) to engage in those kinds of behavior. Yet, at the same time, these officers also know that there are very little consequences for poor decision making that is often life changing and ending

Therefore, the solution to problems like these must be akin to the same kinds of consequences faced by civilians. The people in Ferguson are tired of the term, “justifiable homicide” they instead would like to see investigations and consequences as opposed to having to witness two different forms of justice. They see no difference between the extrajudicial murders of yesterday and so-called justifiable homicides today, which Blacks are accounted disproportionately. They are tired of subjective citizenship when they deserve full citizenship. They are tired of having to respect the rights of others while their rights are unacknowledged. They are tired of being guilty until proven innocent unlike Darren Wilson (and other White males) who seem to never be guilty first of criminal behavior because they are likely perceived as innocent and non-dangerous. Finally and perhaps more important , their tiredness falls on the backdrop of histories of racial discrimination (legal and custom), brutalization of their bodies via systems of social control/criminal justice, and outright democratic exclusion. The only fix to this problem is police accountability. No other fix will work. Those in Ferguson and beyond must believe that they too matter and that the death of their bodies will be met with swift justice. The Ferguson movement is essentially proposing that now is our society’s chance to prove Taney wrong.

Dr. Jason Michael Williams is an activist scholar who is deeply involved in the commission of social justice. He is the Criminal Justice department chair at the Hampton Institute. Williams received his B.S and M.S in Criminal Justice from New Jersey City University (NJCU) and his PhD in Administration of Justice from Texas Southern University. He has engaged in a plethora of research projects, presented at a number of academic conferences, and is known by many as the ‘public criminologist.’ He currently teaches at Fairleigh Dickinson University.