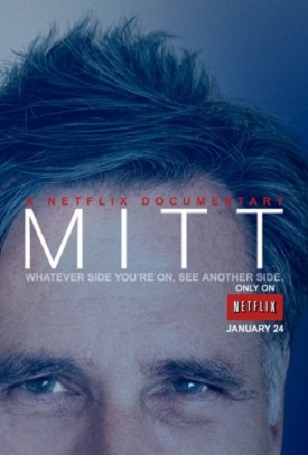 (Image via Netflix)Simple-minded devotion to so-called “behind-the-scenes” consultations among candidate Romney and his family plunges the documentary “Mitt” into the abyss of know-nothing, self-affirming reality TV.

In the chronicles of the 1%, this “documentary” (debuted at the Sundance Film Festival in Salt Lake City on Jan. 17; released on Netflix on Jan. 24; and produced by Greg Whiteley) has to rank way up there with Romney’s 47% comment itself. I’ve never seen a campaign narrative that offers so little substance; it’s an extended campaign commercial after the fact, but it’s also something more insidious in that it asks us to forget every policy issue recent presidential elections have been fought over. In its simple-minded devotion to so-called “behind-the-scenes” consultations among candidate Romney and his family, it plunges reality TV into the abyss of know-nothing self-affirmation.

And self-affirmation is what this entire film is about, from the family councils about whether or not Romney should run for president in 2008 and 2012, to the numerous occasions for prayers before and after big events, like debates. Such relentless gratitude to the lord probably comes easiest to those who haven’t experienced the tribulations faced by lesser mortals. This is self-affirmation to the point of excising anything real, a projected fantasy of an intact 1950s America, the 1%’s founding presumption.

The point of the documentary – as his associates emphasized during the campaign – is that Romney never needed the presidency; rather, the country needed Romney as the man of the hour who would turn things around (as he did at Bain Capital), and in the end, it was the country’s loss for going with its emotions and picking Obama, who has no experience in the private sector. The Romneys, we are meant to understand, will go on – indeed, they will be just fine, what with their willingness to take on each other’s emotional burdens – but as for the country, why, that’s another story.

Bizarrely, in a documentary about two consecutive presidential campaigns stretching over six years, there is no interest in noting the centrality of political operatives; unless one counts the nameless “friends” – I had to look up the forgotten Matt Rhodes and Stuart Stevens – who counsel fortitude after losses. And one would think that Romney has no policy positions except to help small business, by taxing and regulating less and letting the free market work its wonders.

Predictably, too, the narrative highlighted is one based not on the realities of demographics, but entirely personalized: thus it is the treason of the surreptitious 47% video that stands out, or Candy Crowley’s supposed bias toward President Obama in the CNN foreign policy debate. We’re led to believe that both Romney and Obama are equally virtuous; they’re self-sufficient, operating not according to the fine-tuned dictates of political consultants and donor constituencies, but personal conviction alone – the difference being that Romney is for small business not big government.

Romney, however, is so difficult to salvage that even this most sympathetic version, created by fellow Mormon Whiteley, including such touches as Romney picking up hotel room clutter, ironing his tuxedo while wearing it, and asking his family what one says in a concession speech – cannot prevent the constant flow of unintended revelations.

Eldest son Tagg, who, along with his mother Ann, is the rock upon which Mitt always rests, relates the horror of Ann’s MS diagnosis – reminding us all over again about the inequities of health care in this country. Mrs. Romney, after all, has her dressage horses to lean on whenever she feels fatigued. The rest of us don’t have horses – well, horseshit perhaps -whenever we deal with the byzantine insurance industry.

At one point Romney reveals that the much-maligned elevators in his house are to help his wife – recalling again how the ruling class, which this movie epitomizes despite its best intentions, remains untouched by the economic crisis. Romney marvels at the distance his father traveled as someone “born in Mexico,” as though he were an illegal Mexican immigrant who somehow rose to become a CEO and a governor, not the scion of a powerful Mormon family.

Mitt exemplifies the deep flaws of much of American political journalism: Politics is personalized, trivialized and ultimately made beside the point. Romney just happened to lose because of quirks in his two flawed campaigns; should we choose not to believe this gross distortion, we would shift our focus to policy differences. Ignoring policy also means that the utopian alternative to every issue – which even the Democratic party never takes up – need not be discussed.

Another year perhaps a Democrat – Hillary Clinton in 2016? – might lose in less than favorable circumstances, and we would have a different personality in essentially the same narrative upholding the inherent goodness of candidates for major office and the electorate as a whole.

This analysis is not meant to bash Romney, whose transformation from a Northeastern democrat with moderate social positions to a “severe” conservative after the end of his Massachusetts governorship is well-documented (though in the movie, the Romney family mocks those who assail him for flip-flopping, comparing their plight to that of Kerry in 2004). The point is a larger one about the nature of media bamboozlement, during and after campaigns.

Structural explanations for shifts in the electorate make for supposedly less interesting spectacle than the sight of Ann Romney pulling her horse’s tongue when she’s feeling MS fatigue or Romney doodling his queer logic as a futile barrier against the big-government-loving electorate.

Mitt is not an isolated phenomenon; this particular reality show goes on all the time, regardless of political affiliation. We are all little Mitts now, self-righteous, devoted to tribal honor, enamored of our self-sufficiency, willing instruments of ideologies (or divinities) beyond our ultimate comprehension. We have lost all sense of fight, as Mitt, bizarre yet typical, shows at every turn. Even now the Democratic counterparts to Greg Whiteley are busy “humanizing” Barack or Hillary, the same corporate creatures beholden to the same elite interests, with positions marginally to the left of Mitt; that documentary is coming soon.

Donate Now
Share
Copyright, Truthout. May not be reprinted without permission.
Anis Shivani

Anis Shivani‘s books in the last year include Soraya: Sonnets, Whatever Speaks on Behalf of Hashish: Poems and Karachi Raj: A Novel. Assessing Literary Writing in the Twenty-First Century comes out in early 2017. His new book is Reflections on a Decade of Violence, a selection of his recent political writings.