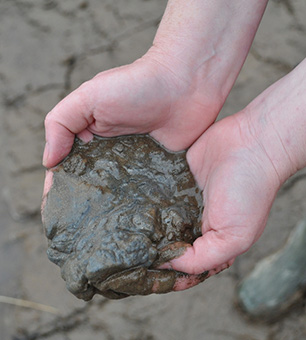 Amy Adams, North Carolina Campaign Coordinator for Appalachian Voices holds sediment covered in fine, gray coal ash. This photo was taken just upstream of the drinking water intake in Danville, VA, approximately 20 miles downstream of the ash spill. (Photo: Appalachian Voices)A ruptured Duke Energy pipe in Eden, North Carolina, caused the release of up to 82,000 tons of toxic coal ash and 27 million gallons of contaminated water into the Dan River. “The ecological disaster that is unleashed here is going to play out in the order of months, if not years,” said Matt Wasson of Appalachian Voices.

Matt Wasson stood on the banks of the Dan River in North Carolina on Tuesday afternoon, just two miles downstream from the third-largest coal ash spill in US history.

“The entire river is this eerie ashen color that is just incredibly unnatural,” said Wasson, a member of the group Appalachian Voices who joined researchers and environmentalists in responding to the spill. “If you take a bucket and sort of scrape along the bottom, there is what looks like 6 to 10 inches of coal ash, and again this is two miles downstream [from the spill].”

On Monday, Duke Energy reported that a ruptured stormwater pipe under its 27-acre coal ash pond in Eden, North Carolina, caused the release of 50,000 to 82,000 tons of toxic coal ash and up to 27 million gallons of contaminated water into the Dan River.

Since then, the company has been working around the clock to permanently plug the leaking waste reservoir, which continues to release pollution into the river. Environmentalists, who claim the company has refused to move tons of toxic coal ash from unlined holding ponds next to rivers and lakes across the state, are echoing a collective “we told you so.”

Coal ash pollution can be contaminated with toxic and heavy metals such as arsenic, chromium, lead, selenium and manganese. The volume of coal ash spilled into the river would fill between 20 and 32 Olympic-size swimming pools. Duke Energy and state regulators have been testing the river for pollution and said the results would be made public by Thursday.

Wasson compared the spill to the 2008 Tennessee Valley Authority disaster in Kingston, Tennessee, where a coal ash sludge impound broke and unleashed 1 billion gallons of toxic sludge that destroyed houses, wetlands and streams. He said the Duke spill might not have the human impacts of the Kingston disaster, but impacts to local ecosystems could be just as bad.

“This is a really big disaster,” Wasson said. “… The ecological disaster that is unleashed here is going to play out in the order of months, if not years.”

Coal ash is produced by coal-burning power plants, and the leaking pond sits between the Dan River and a Duke plant that retired in 2012. Duke dumped coal ash from the plant, which mixes with rain and becomes a sort of slurry, in two open-air, unlined ponds on the site for more than 50 years.

Duke has placed temporary plugs to decrease the amount of ash and water gushing from the pond but had not found a permanent solution as of Wednesday. Duke Energy spokesman Meghan Musgrave told Truthout that hundreds of people were working day and night and exploring “multiple options” to stop the flow of pollution, which was continuing to flow into the river at fluctuating levels of as of Wednesday evening. State and federal officials are on the scene.

The state Department of Environment and Natural Resources (DENR) has said that well water and water treated by municipalities downstream is safe to drink. Environmental groups have scolded Duke and state regulators for failing to quickly release water test results and waiting 24 hours to send out a press release about the spill in light of the recent spill of a dangerous chemical used to wash coal in West Virginia that left 300,000 people in Charleston without usable water.

“To not raise flags about concerns over people’s drinking water is completely irresponsible,” said Ulla Reeves of the Southern Alliance for Clean Energy.

Environmentalists say coal ash poses serious cancer and health risks that have so far gone unchecked. There are no blanket requirements to monitor coal ash and sludge impounds, and no federal regulations for coal ash exist.

There are more than 1,000 coal ash dumps and ponds across the country, and data indicate that at least 535 operate without a liner that would prevent hazardous chemicals from contaminating drinking water sources. More than 200 spills and contamination events have been documented at coal ash sites in 37 states.

The Obama administration took office shortly after the Kingston disaster, and in 2009 former EPA administrator Lisa Jackson pledged to adopt coal ash standards by the end of the year. The Environmental Protection Agency (EPA) made some proposals in 2010 but failed to finalize any rules despite evidence of contamination from coal ash ponds across the country.

Several environmental and public health groups sued the EPA, and last year a federal court ruled that the EPA must act. Last week, the EPA set a December 19, 2014 deadline to finalize the first federal regulations for coal ash pits.

The EPA has the option of regulating coal ash as a non-hazardous waste, but environmentalists say that the lessons learned from the Dan River spill could push the agency in another direction.

“A spill like this in North Carolina … might push the EPA to regulate this as hazardous waste,” said Jason Skylar, a campaign director for Earthjustice, one the groups that challenged the EPA to write rules for coal ash.

Duke is No Stranger to Coal Ash Controversy

Duke Energy’s 14 unlined coal ash ponds in North Carolina are facing litigation. The company has relatedly claimed that the ash ponds are safe and in compliance with local environmental laws, but environmental groups have documented leaks and other problems at several sites, including groundwater contamination from an unlined coal ash pond near Wilmington that left a small community’s well water unusable.

In 2011, environmental groups found that groundwater under the Dan River sludge ponds was contaminated with levels of chromium, iron, lead, manganese, silver and sulfate that exceeded state groundwater and federal drinking water standards. A 2009 EPA review of Duke’s two ash ponds on the Dan River found seepage and rated the site as a “significant hazard,” meaning failure of the impound dam could cause serious danger to the environment and local economies but probably not to human life.

Frank Holleman, senior attorney for the Southern Environmental Law Center, which has challenged Duke’s ash ponds, said that after legal challenges, two other utility companies in the region agreed to move their coal waste from unlined ponds to landfills or have it recycled. Duke Energy, he said, has been reluctant to do so despite expensive legal challenges.

“Duke is the only one of the three insisting on keeping this outmoded approach, this dangerous and risky approach,” said Holleman, who noted that other utilities are moving their coal ash without raising rates for consumers.

Holleman suggested that if Duke Energy were serious about moving away from using unlined ponds to store its coal ash legacy, there would be no coal ash to spill in the Dan River two years after the power plant at the site closed down.