The Labor Department reported that the economy added 173,000 jobs in August, somewhat fewer than most predictions. However, the prior two months’ numbers were revised upward by 44,000, bringing the average gain over the last three months to 221,000. The story on the household side was mixed. The unemployment rate dropped to 5.1 percent, as employment increased by 196,000. However the employment-to-population ratio (EPOP) was little changed at 59.4 percent, a number that is still three percentage points below the pre-recession peak.

Health care was the biggest job gainer in August, adding 40,500 jobs. Job growth in health care has increased substantially since the ACA took effect. Average job gains over the last five months have been 43,700 compared to growth of just 18,300 per month in the three years from December 2010 to December 2013. Restaurants added 26,100 jobs, roughly in line with their recent pattern. One of the aspects of the recovery that has been striking is that restaurant employment continues to account for a large share of employment growth. In the late 1990s, the share of employment growth in restaurants fell as the labor market tightened and workers were able to get better paying jobs. 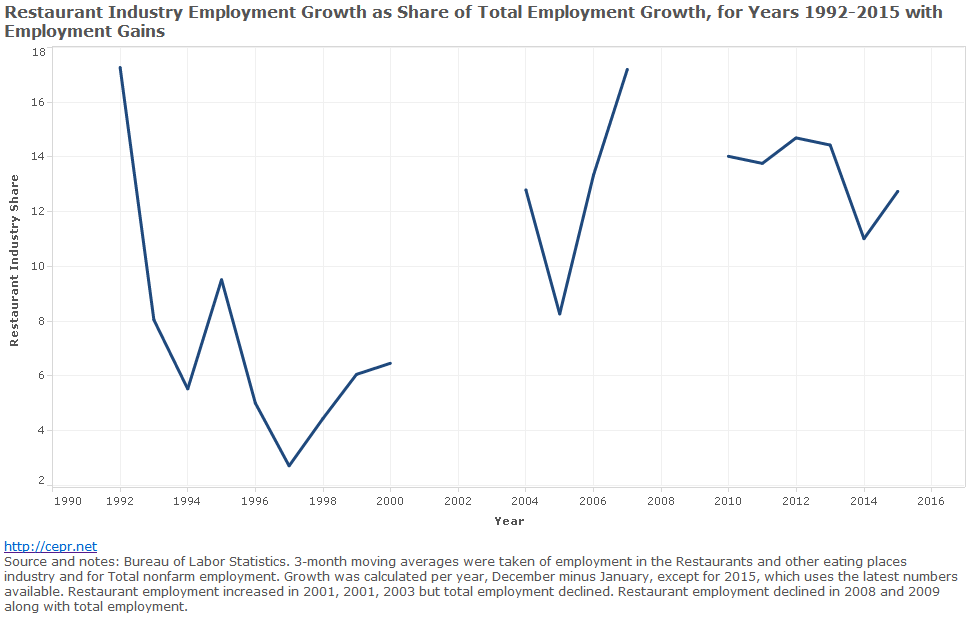 The other sector reporting big gains was state and local government education which added 31,600 jobs. This reflects a timing issue with many schools starting earlier than normal. These jobs will likely disappear in next month’s report.

Construction added just 3,000 jobs. Average growth in the sector over the last three months has been just 3,700 jobs. This is surprisingly weak given relatively strong data on housing starts and construction more generally. On the other hand, the growth earlier in the year was surprisingly strong given relatively weak construction data. Manufacturing lost 17,000 jobs, more than reversing a gain of 12,000 in July. With the rise in the dollar and weak growth elsewhere in the world, the general trend is likely to be downward.

Retail added just 11,200, less than half the 27,700 average monthly rate for the last year. This might just be the result of unusually rapid growth in the prior three months. The temp sector added 10,700, barely offsetting a loss of 9,200 jobs in July. The extent to which the temp sector provides a harbinger of future job growth is exaggerated, but this growth is not a strong point.

Overall, private sector job growth of 140,000 was the weakest since a weather-reduced 117,000 reported for March. Prior to that, it would be necessary to go back to December, 2013 to find weaker numbers.

Wage growth remains weak. The average hourly wage rose by 8 cents in August. It has risen at a 1.9 percent annual rate in the last three months compared with the prior three months,

down slightly from its 2.2 percent rate over the last year.

Apart from the drop in the unemployment rate, other news in the household survey was mixed. The percentage of unemployment due to people voluntarily quitting their jobs fell slightly

All the duration measures of unemployment increased in August, with the share of long-term unemployed rising from 26.9 percent to 27.7 percent, the second consecutive increase. The declines reported in black and black teen unemployment in July were reversed in August, standing at 9.5 percent and 31.3 percent, respectively. Younger workers are accounting for a larger share of job growth in the post ACA era, with employment of workers over age 55 actually falling by 213,000 (all men) in this report. People between the ages of 20–24 have accounted for 16.7 percent of the job growth over the last year.

While the drop in unemployment in the August report is encouraging, the overall report is not especially positive. There is no evidence that wage growth is accelerating and there is a real risk that employment growth is slowing. The big question is whether the 140,000 private sector job growth in August is the new trend or whether it was weakened by the strong growth in prior months.