The Labor Department reported that the economy added 280,000 jobs in May. With modest upward revisions to the prior two months’ data, this brings the average over the last three months to 207,000. Almost all the job growth was on the service side as a drop of 18,000 jobs in mining largely offset a rise of 17,000 in construction and an increase of 7,000 jobs in manufacturing.

The household survey showed a mixed picture. More people entered the labor market, but this was associated with a small increase in the number of unemployed, causing the unemployment rate to edge up to 5.5 percent. On the positive side, the employment-to-population ratio (EPOP) rose to 59.4 percent, its highest level in the recovery. There were few noteworthy changes by demographic group, although the EPOP among college grads increased by half a percentage point to 73.0 percent. This brings their EPOP back to its level of a year ago; it had been lagging.

The duration measures of unemployment all improved modestly, with the share of long-term unemployed falling to 28.6 percent, the lowest level for the recovery. The share of voluntary quits among the unemployed edged down to 9.5 percent. This measure of confidence in the labor market remains far below pre-recession levels.

Older workers are accounting for a much smaller share of job growth than earlier in the recovery. Over the last year, workers over age 55 accounted for 38.5 percent of employment growth. In the years from January 2011 to January 2014, they accounted for 60.0 percent of employment growth. This could be in part due to the Affordable Care Act, as many older workers may no longer need to work to get health insurance.

Health care showed the strongest jobs gains in the establishment survey, adding 46,800 jobs in May after adding 48,000 in April. This is up sharply from a monthly average of 25,800 in 2014. Other big gains were in retail with 31,400; and arts, entertainment and recreation, which added 29,000 for a gain of 1.4 percent. The last is almost certainly an anomaly that will be reversed. In prior years, gains of this size were almost always followed by declines in the next month. 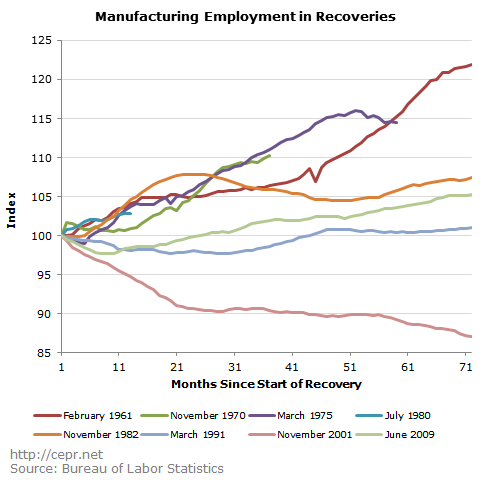 While this report is mostly positive, the strong job growth remains out of line with other data showing a slowing economy. The drop in GDP reported for the first quarter led to a drop of 3.1 percent in productivity. While the first quarter data was weakened due to unusually bad weather and other one-time factors, even excluding the quarter, productivity growth had only increased at just over a 1.0 percent annual rate in the last two years. It is difficult to imagine this is the trend pace of productivity growth in the economy.