The Labor Department reported the economy created 223,000 jobs in April. This is disappointing since the already weak March number was revised down by 41,000 to 85,000. Since the March number was held down by unusually bad weather, it was reasonable to expect more of a bounceback in April. With the downward revision, the two-month average is just 154,000, a considerable falloff from last year’s pace.

There were few sectors showing much strength in the month. Professional and business services added 62,000 jobs, 20,700 of which were in the relatively high-paying professional and technical services sector. Construction added 45,000 after a reported loss of 9,000 in March. Health care added 45,200 jobs, up considerably from its average of 33,000 over the last year. Restaurants added 26,000 jobs after losing 7,400 jobs in March. Over the last year, job growth averaged more than 32,000 a month. The government sector added 10,000 jobs in April, reversing a loss of 9,000 jobs in March.

Manufacturing employment has essentially gone flat, adding just 1,000 jobs. Employment in the sector is up by just 4,000 since January, and because the average workweek has declined, the index of aggregate weekly hours in manufacturing is down by 0.5 percent from its January level. Overtime hours are also down sharply over the last year. This is consistent with the data showing a rise in the trade deficit due to the stronger dollar.

A downward revision to last month’s wages eliminated the little evidence we had seen of accelerating wage growth. The annual rate of growth over the last three months compared with the prior three months is 2.3 percent, compared to 2.2 percent over the last year.

The news is a bit better in the household survey. The unemployment rate edged down slightly to 5.4 percent. The number of involuntary part-time workers fell by 125,000 from the March level and is now down by 880,000 from its year-ago level. Meanwhile, the number of people who choose to work part-time rose by 320,000 from March and is up by 1,140,000 (6.0 percent) from its year-ago level. This is likely due to the increased flexibility offered by the Affordable Care Act. 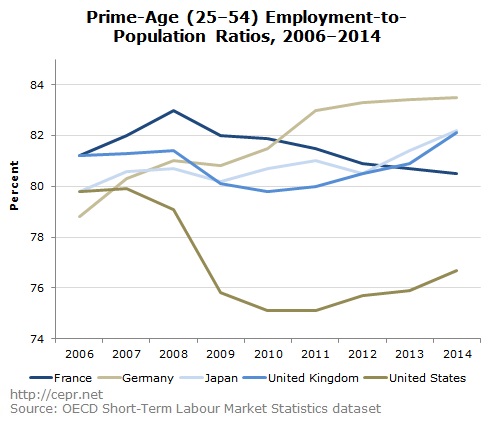 There continues to be a debate among economists over the extent to which the fall in employment rates is cyclical. In this respect, it is worth noting that much of the decline is among prime age workers (25-54), not the result of the retirement of the baby boomers. The United States is doing far worse in employing prime age workers than its competitors. Its prime age EPOP fell from just under 80.0 percent before the downturn to slightly above 77.0 percent in the most recent quarterly data. By contrast, Germany and Japan have both seen sharp rises in EPOPs to 83.4 percent and 82.6 percent, respectively. Even France, which has seen a modest decline in prime age EPOPs, still has an EPOP of 80.4 percent.

If the March and April jobs reports are taken together, they give a picture of job growth at a considerably slower pace than what we saw last year. This is more consistent with the rate of economic growth that we saw in 2014, and which may have slowed further in the first quarter (after accounting for weather). Productivity growth has been extraordinarily weak through the recovery and has actually been negative in the last two quarters. Without some additional spur to growth to offset the trade deficit, it appears that a return to trend productivity growth is likely to be associated with slower job growth.