The Labor Department reported that the economy created just 38,000 new jobs in May, the weakest job growth since September of 2010, when it lost 52,000 jobs. In addition, the jobs numbers for the prior two months were revised down by 59,000, bringing the average for the last three months to just 116,000.

The household survey showed a drop of 0.3 percentage points in the unemployment rate, but this is not especially good news. The decline was almost entirely due to people leaving the labor force. The employment-to-population ratio [EPOP] was unchanged at 59.7 percent, 0.2 percentage points below the peak for the recovery.

The drop in EPOPs is especially disturbing since it is among prime-age workers and it is for both women and men. The EPOP for prime age workers is still 2.5 percentage points below its pre-recession peak and 4.0 percentage points below the peaks reached in 2000. While many analysts have tried to explain this drop as a supply side story, it seems implausible that a very slight downward trend for men would happen to sharply accelerate in 2001, just as the upward trend for prime age women reverses to a downward trend, due to supply side factors. The only plausible explanation is that the demand for labor has weakened sharply. 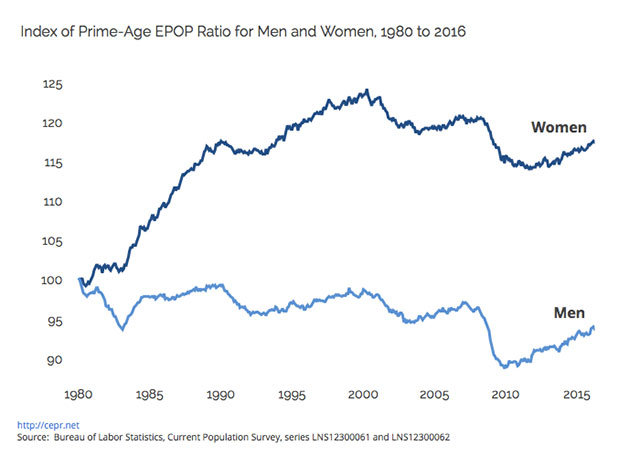 Other data in the household survey was mixed. The number of people involuntarily working part-time jumped by 468,000 (7.8 percent). However, the duration measures of unemployment all fell in May. The percentage of unemployment due to voluntary quits was little changed. The number of people who chose to work part-time continued its upward path, growing by 137,000. It is now 656,000 above its year-ago level.

There was little positive news in the establishment survey. While the strike at Verizon lowered the May jobs number by roughly 35,000, the picture would be little different without the strike. The weakness was widely spread across sectors. Only the healthcare sector showed much strength, adding 45,700 jobs, although the relatively high-paying professional and technical services sector added 25,800 jobs. The restaurant sector added 22,200 jobs roughly the same as its average over the last year.

There is little change in the wage growth picture, with wages up by 2.5 percent over the last year, although the annualized rate comparing the most recent three months with the prior three months is somewhat better at 2.9 percent. It is important to remember that wages have been rising faster than total compensation, as employers have been reducing the generosity of their health care benefits.

Adding to the picture of weakness in this report, the one-month employment diffusion index, which shows the percentage of industries adding jobs, was just 51.3 in May, the lowest reading since February of 2010. The 3-month and 6-month indexes, which reflect employer hiring intentions, were similarly weak. The index of aggregate hours rose just 0.1 percent in May, the same as the prior two months, and is actually below its January level. It would be difficult for the Fed to look at these data and say that the economy should be growing more slowly. Due to weak employment growth, the index of aggregate weekly hours is below its January level.