Invisible Man, Got the Whole World Watching is a chronicle of Mychal Denzel Smith’s political and personal education in a country and era defined by both the presidency of Barack Obama and the state-sanctioned murders of so many Black people. In this compelling mix of memoir and analysis, Smith questions our assumptions about race, masculinity, mental health, feminism and LGBTQ rights. Order your copy today by making a donation to Truthout!

The following is the introduction to Invisible Man, Got the Whole World Watching:

I don’t remember what I was doing when George Zimmerman killed Trayvon Martin. I’m sure I was watching the All-Star game, as I had done since I was a kid even younger than Trayvon. I may have even made a snack run to 7-11. I almost certainly was tweeting, or at the very least reading Twitter. I may have been on deadline and convincing myself that watching the game wasn’t procrastinating but all a part of my writing process. I was probably stressing about money. I probably wasn’t thinking about dead black boys.

I’ve had the opportunity to do a number of things Trayvon will never have the chance to, and the guilt of that weighs heavily on me. Everything Trayvon did that supposedly justified his death — wear hoodies, walk to the store at night, buy Skittles, have tattoos, smoke weed, be suspended from school — I did. I could have been Trayvon. So many of us black boys trying to become black men in America could have been. Knowing that made his death that much harder to stomach.

One of the more pernicious effects of racism on the psyche is the constant questioning of one’s worth and purpose. It can be almost as debilitating as death. Almost. I don’t wish to make these things seem equivalent. I have my life; Trayvon does not. But the source of my guilt is understanding that American racism will take some of our lives while holding others of us up as exemplars of success, providing the illusion that there is an escape. It places us in the unenviable position of wishing that our martyrs could have survived to become tokens. 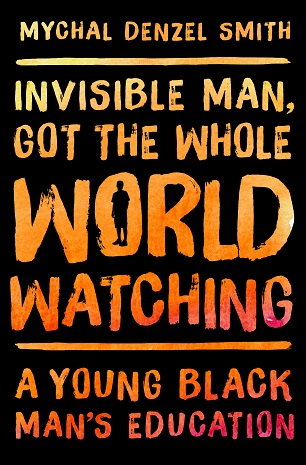 (Image: Nation Books)I tried to imagine who Trayvon would have been on February 26, 2013, 2014, 2015, 2016, and beyond. The things he would have seen, the world he would have known, how he would have created himself. When you’re introduced to a martyr as a result of their death, they aren’t a whole person. They are a name and a story. They are a set of symbols and projections. Their lives are flattened for our consumption, and whatever attempts we make to remind ourselves of their humanity are no substitute for the face-to-face interactions we’ll never have with them.

There’s a particular pain in that realization when the martyrs are as young as Trayvon. I didn’t get to know who Trayvon was, but as a seventeen year old he probably hardly knew himself. He liked football, Lil’ Wayne, airplanes, and taking things apart to put them back together, but he never got the opportunity to ask himself why. He never had his assumptions challenged, never had his worldview shattered, his heroes humanized, or his morals questioned. He never had to confront his own bigotry or his complicity in different systems of oppression. To ask who he would have been on February 26, 2013, 2014, 2015, 2016, and beyond is try to fill in the gaps where only experience can be the guide, and George Zimmerman took the opportunity for experience away from Trayvon on February 26, 2012.

Trayvon Martin was a seventeen-year-old black boy in America. White supremacy tells a lot of lies about seventeen-year-old black boys who grow up in America, but we can’t escape the fact that those black boys absorb a culture of misogyny, homophobia, transphobia, class-based elitism, self-hatred, violence, untreated mental illness, and a host of other American problems that translate differently when experienced through the lens of American racism.

I don’t want to appear to be tarnishing the image of Trayvon Martin, a black boy I never knew. There’s an almost instinctual desire to protect our martyrs, so many of them being young black men viciously maligned in life and unable to escape the barbs of racism in death. If we don’t rescue their narratives, they’ll forever be remembered only to the extent that white supremacy lends them any humanity. But we do a disservice to our martyrs by imposing perfection upon them. We do a greater disservice to ourselves, the survivors and potential tokens, by not honestly reckoning with who our martyrs were and who they could have been.

We resist this conversation because black men and the culture they create so easily become scapegoats. Without nuance, it very quickly turns toward a blaming of black men for the existence of misogyny, homophobia, etc., not a careful examination of how black men can experience or contribute to these forms of oppression. And the more the image of black men is connected to everything wrong with the world, the easier it is to justify killing us. Racism comes to be seen as a natural reaction to the existence of black monsters.

Who would Trayvon Martin have been on February 26, 2017, 2018, 2019, 2020, and beyond? The short answer: he would have been a black man in America. The long answer involves figuring out exactly what that entails.

I was twenty-five years old when George Zimmerman killed Trayvon Martin. I hadn’t prepared for life at twenty-five, having believed at different points of my life that I wouldn’t make it that far. I could have been Trayvon, or any number of nameless, faceless black boys killed by police or vigilantes, by other black men or themselves. Twenty-five was a relief and a surprise and opportunity. I would be afforded the time to create myself that Trayvon wasn’t.

I didn’t know how to do that. Or, I didn’t know how to do that and become a healthy and whole human being. It seemed that every black man I witnessed attempting to create himself came through to the other side broken. They walked through the culture of misogyny, homophobia, transphobia, class-based elitism, self-hatred, violence, untreated mental illness, and other American problems and emerged as living proof of the lies white supremacy tells about black boys and men in America. I was doing the same, because I knew no other way.

I wanted to figure out how to create that world. I looked at my own life and asked how I made it to twenty-five. I asked who influenced me to think the way I did, what events had been most important in shaping my worldview, who and what challenged me to see it all differently. I asked myself: How did you learn to be a black man?

Then I wrote down some answers, for the martyrs and the tokens, for the Trayvons that could have been and are still waiting.

Copyright (2016) by Mychal Denzel Smith. Not to be reproduced with the permission of the publisher, Nation Books.

Mychal Denzel Smith is a Knobler fellow at The Nation Institute and a contributing writer for The Nation magazine. He has also written for The New York Times, The Atlantic, Salon, Feministing.com, The Guardian, The Root, theGrio, ThinkProgress and The Huffington Post, and he has been a featured commentator on NPR, BBC radio, CNN, MSNBC, Al Jazeera America, HuffPost Live, and a number of other radio and television programs.