In mid-1970s, feminist and peace movement activist Congresswoman Bella Abzug tore through the intel world, fearlessly taking on the CIA and the NSA for surveilling Americans. So I’ve been reading some of her hearings, and it turns out that the dynamics of the intelligence world (in this case the CIA) and its relationship with Congress and the public haven’t changed at all. Today, journalist Jason Leopold is nicknamed a ‘FOIA terrorist’ by a ‘certain government agency’ because he files so many requests so effectively, and sues when they deny him the things to which he is entitled.

This was going on in the 1970s, right after FOIA was amended to allow requests to the intel community. Bella Abzug was one member who helped make that happen, with hearings and legislative initiatives to force various agencies to reveal who they were surveilling.

Abzug’s tenure in Congress was short but incredibly influential – she was nearly redistricted out of her spot in 1972, and eventually was drummed out of politics in 1976. But wow did she leave a mark. Here’s a hearing in 1975 during which she went after the CIA Director, William Colby, for keeping files on peace activists and members of Congress. It’s a remarkable hearing, not just for the stunning and aggressive back and forth between Colby and Abzug, but also for the ass-kissing of the CIA by chief GOP ranking member Sam Steiger and how FOIA and information disclosure became the focal point of tension.

First, here’s Abzug, who had received her CIA file the night before the hearing. It’s pretty obvious the CIA was fighting disclosures, and only gave her the file at the last minute because it simply had to. The file detailed extensive surveillance of her activities as a member of Congress and as a private attorney, including surveillance of her work when she represented entertainment figures during the House Un-American Activities Committee red-baiting episodes. It also showed violations of attorney-client privilege. Colby responds that CIA surveillance happened to her and three other members of Congress in ‘perfectly natural’ ways, namely because she was talking to foreigners who might be suspicious. 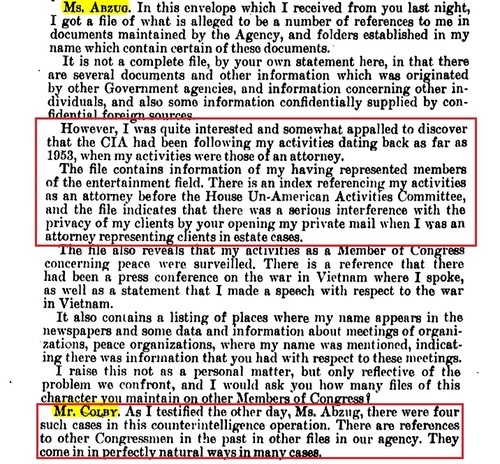 Next, Abzug asks how the CIA was able to get information on her domestic activities with the Women’s Strike for Peace in 1967. Colby replies that the activities were public, to which Abzug says, uh, no internal documents listing membership were not public. Colby plays dumb. I don’t know, he says. Abzug asks if the CIA had spies in peace grups. Colby again plays dumb.

Then libertarian-leaning Arizona Congressman Sam Steiger, best known later in his career for shooting a few defenseless donkeys, interrupts. Abzug, resentfully, concedes to protocol and allows Steiger, “anxious to say something”, to speak. Steiger then goes on to a noxious episode of lavishing praise on Colby for demonstrating the remarkable courage of even showing up to this hearing. Then he wonders aloud if the CIA couldn’t be paralyzed by America’s enemies with FOIA requests, a question to which Colby replies, “That is a real concern I have, Mr. Steiger…” 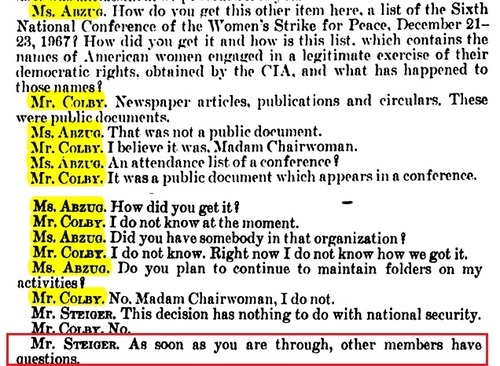 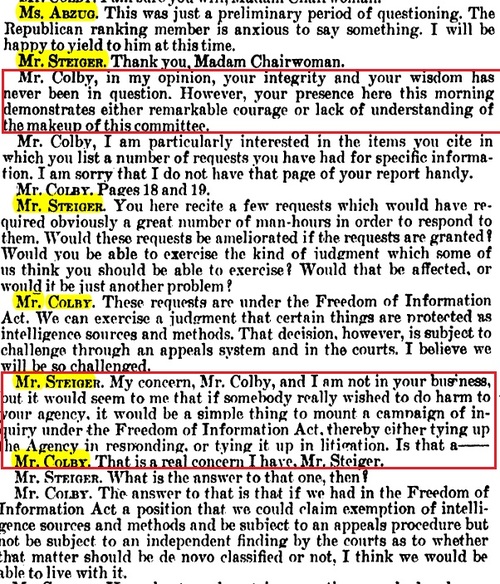