The Center for International Policy released a new report this month focusing on the nuke lobby — the coalition of defense contractors and former government officials who continue to push for costly Cold War-style nuclear stockpile and delivery systems.

Interestingly, the report references a statement by the late Senator William Proxmire, Democrat of Wisconsin, from 1969 about the revolving door of the military-industrial complex:

The easy movement of high ranking military officers into jobs with major defense contractors and the reverse movement of top executives in major defense contractors into high Pentagon jobs is solid evidence of the military industrial-complex in operation. It is a real threat to the public interest because it increases the chances of abuse . . . How hard a bargain will officers involved in procurement planning or specifications drive when they are one or two years from retirement and have the example to look at of over 2,000 fellow officers doing well on the outside after retirement?

In forty years, the problem has of course not gone away. The author of the CIP report notes that there are scores of former government officials working in the nuclear weapons lobby, providing it with special access to the government that it otherwise would not have. The report uses the following table to demonstrate this: 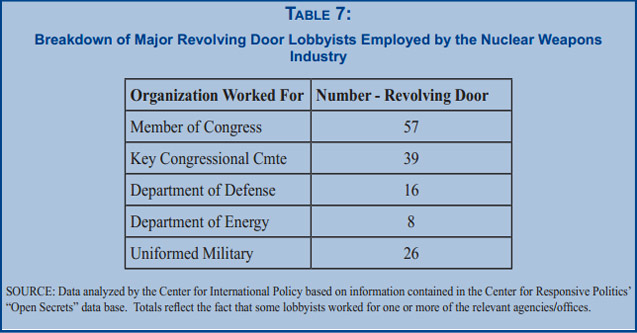 The revolving door continues to be a problem across the entire spectrum of issues that the government deals with. That’s why we here at Republic Report have been hard at work on a project asking retiring Members of Congress to at least commit to disclosing any job negotiations they’re having right now.