On September 26, 2016, activists and allies gathered in front of the United Nations in New York City to commemorate two years since the disappearance of 43 college students from Ayotzinapa, Mexico.

The group marched from One UN Plaza to the Consulate General of Mexico in New York and then on to Times Square, led by New York residents Antonio Tizapa, father of the disappeared student Jorge Antonio Tizapa Legideño, and Amado Tlatempa, the cousin of another missing student, Jesús Jovany Rodríguez Tlatempa. Refrains of a two-year-old quest for justice briefly interrupted Manhattan’s busy streets. “Alive they were taken,” yelled a spirited young woman into the megaphone, “and alive we want them back!” the marchers responded. “Two years,” read one sign, “and no answers.” 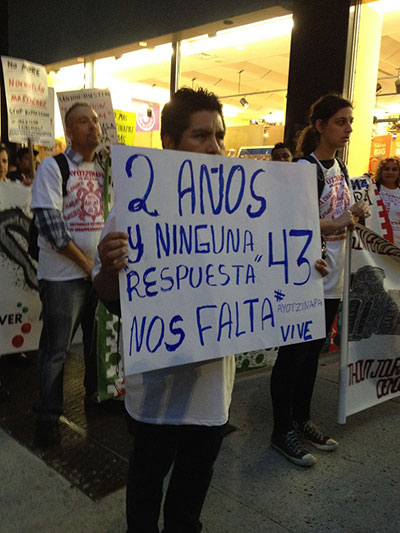 A participant in the march holds a sign that reads, “Two years and no answers. We are missing 43. Ayotzinapa lives.” (Photo: Samantha Denby)In difficult times, the ritual commemoration of injustice can open the door to hopelessness, which then figures as an uninvited guest that has all along been lurking just beyond our field of vision. The students’ families and their supporters have recorded one month … half a year … a year … and now two years of impunity in the case of the hopeful Mexican teenagers, who were studying to become educators in their rural hometowns. Once the door is ajar, the wind can blow through the curtains with even greater force, carrying visions of future anniversaries for government crimes that will not be prosecuted.

Sometimes this breeze can be felt when we gather in the streets and scream: “What do we want? Justice! When do we want it? Now! ¿Que queremos? Justicia! ¿Cuándo? Ahora!“

The phrase boomerangs, between the magic of so many voices booming out in unison, the fear that our words will remain performative in the absence of sufficient action and the dissonance of the demand. Who are we calling out to? Are we asking those in power to administer justice? Are we collectively summoning ourselves to action?

In the case of the students of Ayotzinapa, as in other cases of state terrorism that garner international attention yet remain unresolved, authorities have perfected the strategy of indefinite, bureaucratic postponement. They wield time as a weapon, betting that activists’ energy will be sufficiently drained with the aid of the routine demands of capital: the dwindling of scant resources; physical and psychological illness; the need to feed children; the tenuous quest for joy. 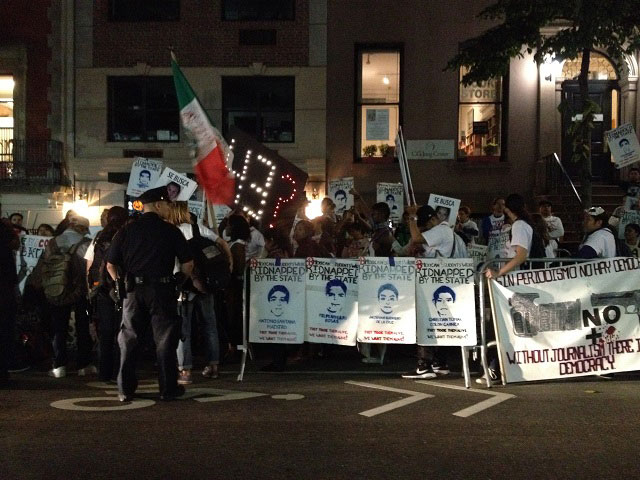 Speakers read the names of the missing college students in front of the General Consulate of Mexico in New York. (Photo: Samantha Denby)

But perhaps collective commemoration in the streets also partakes in this battle over time. People mark the passage of months and years since an injustice was committed not only to demonstrate their ongoing outrage, but also in order to honor everyday efforts to generate something distinct: some other kind of time.

Many seasons are measured in straight-up resistance. This spring, the Mexican government terminated the independent inquiry into the students’ disappearance, the team of experts published its damning but inconclusive report, and now a tremendous amount of work must be done just so that any credible investigation can continue. People leap forward, fall back hard, and grasp shaky supports in order to regain their footing.

But the families of the students — along with the international community of Mexican and [email protected] activists and allies who mobilize for Ayotzinapa — are some of the most resilient and energetic organizers around, and they remind us that commemorating an anniversary of state violence also means gathering to honor all of the alternatives that are cultivated, day by day, between anniversaries. What is celebrated are the communities, created in even the most hostile of conditions, from which seasons dictated by rebellious calendars are born.

Share
Copyright, Truthout. May not be reprinted without permission.
Samantha Demby

Samantha Demby is an activist, writer and welding apprentice based in Brooklyn, New York. She has spent much of the past few years in Mexico and Central America, participating in collectives that support community land defense against extractive projects.