Number one on the new administration’s anti-union to-do list is “right to work” — or as many prefer to call it, “no rights at work” or “right to work for less.” But whatever you call it, more of us will be faced with new laws that codify freeloading, making it optional to pay for union representation.

On February 1, Republicans introduced the National Right-to-Work Act (HR 825) into the US House of Representatives. And it’s nearly certain that a conservative-majority Supreme Court will make the entire public sector right to work within 18 months to two years.

How can unions operate under these hostile conditions? There are already 27 right-to-work states where we can look for lessons. Unions there take a big hit — but some manage to survive and even thrive, despite the extra challenges.

At the Electrical Workers (UE), where I organized for 19 years, we developed trainings to help members in right-to-work states maintain their unity and membership. Here’s what it takes:

Why do any of us pay union dues? It’s because we feel our union fights for us, and we consider it important to our lives.

So one key to surviving right to work is to do the essentials that unionists should be doing anyway: Win grievances. Fight for a good contract. Involve members in regular meetings. Distribute newsletters that report your victories and struggles.

Even after Wisconsin passed right to work in 2015, UE’s locals in the state have largely maintained membership. The main reason is that members are involved in fights they care about. For instance, in a recent contract campaign, Local 1107 at the Freudenberg auto gasket plant won good raises and additional personal days.

“It all comes down to a good offense,” says Western Region President Carl Rosen. “There’s not much more to it.”

North Carolina has been right-to-work since 1949, thanks to a vote by an all-white Jim Crow legislature which also banned collective bargaining for public employees statewide. But those obstacles haven’t stopped public service workers there from joining UE Local 150 and campaigning on workplace issues. For instance, after a big fight over racial discrimination in discipline at the state hospitals, several unfairly fired workers won their jobs back.

This January a group of Greensboro city workers won union recognition and payroll deduction of dues, after members of 50 community and labor groups packed a city council hearing to support them. Next they’re asking the city to agree to a “meet and confer” process of informal bargaining.

“We know from history in the 1920s and ’30s that unions have not always had collective bargaining and dues deductions,” said Vice President Angaza Laughinghouse. “We won victories because of rank-and-file actions and community relationships. That was, and continues to be, our power.”

Signing up a new member can be as simple as asking your co-worker to join the union. One thing’s for sure: they’re not going to join if no one asks!

So make sure you have a plan to approach anyone who is not a member and ask them to sign a union card. You’ll be surprised at how many you get.

“We have about 95 percent membership in our local, even five years after our state law changed to right to work,” said Amanda Miller, president of the Kalamazoo teachers union (NEA). “We did a training on building our union, and about 18 of us took that information and went and talked to our co-workers about joining.

“Not only did they all say yes, they did it happily. We just had to ask.”

What about co-workers who are hostile or indifferent to the union? Again, start by asking them to join. Remind them of all the ways the union has benefited them personally. Let them know their co-workers don’t appreciate their freeloading.

3. Make Membership the Union’s Business, Not the Boss’s

“We make personal contact with all new hires,” Miller says. Every new employee should be welcomed into the union right away. Push for contract language that allows union leaders to talk with new hires at orientation.

Hand out membership cards, the union contract, and the latest newsletter. Prepare talking points for all union leaders who will be welcoming new members. New hires should be told, “The wages, benefits, and protections at your new job are here because workers support the union and fought for them.”

Also be sure to tell new hires that joining the union gives them the right to vote on union leaders and the contract.

Union security language, which says all employees must belong to the union or pay dues, is often boilerplate and has been in our agreements for decades. But if right to work hits your state or sector, employers will be looking to change that language next time the contract is up. To prevent Human Resources from pushing drop-out forms, propose contract language that prohibits the employer from talking with bargaining-unit members about union membership. That’s your business, not theirs.

Another idea: propose language that will automatically restore your previous union security language, if and when right to work is reversed.

Finally, look at your union constitution. What does it say about members in good standing? Make sure you define how long someone must have remained in good standing — that is, current in their dues payments — in order to become a steward, run for office, vote in elections, ratify the contract, or vote on a strike.

The time should be long enough to avoid folks’ dropping their membership in between contracts, then joining right before contract ratification, just to vote. Your union might decide that three months, six months, or 12 months is fair. But your policy should also allow for new hires to join and participate right away, so long as they’ve been members ever since they became eligible. 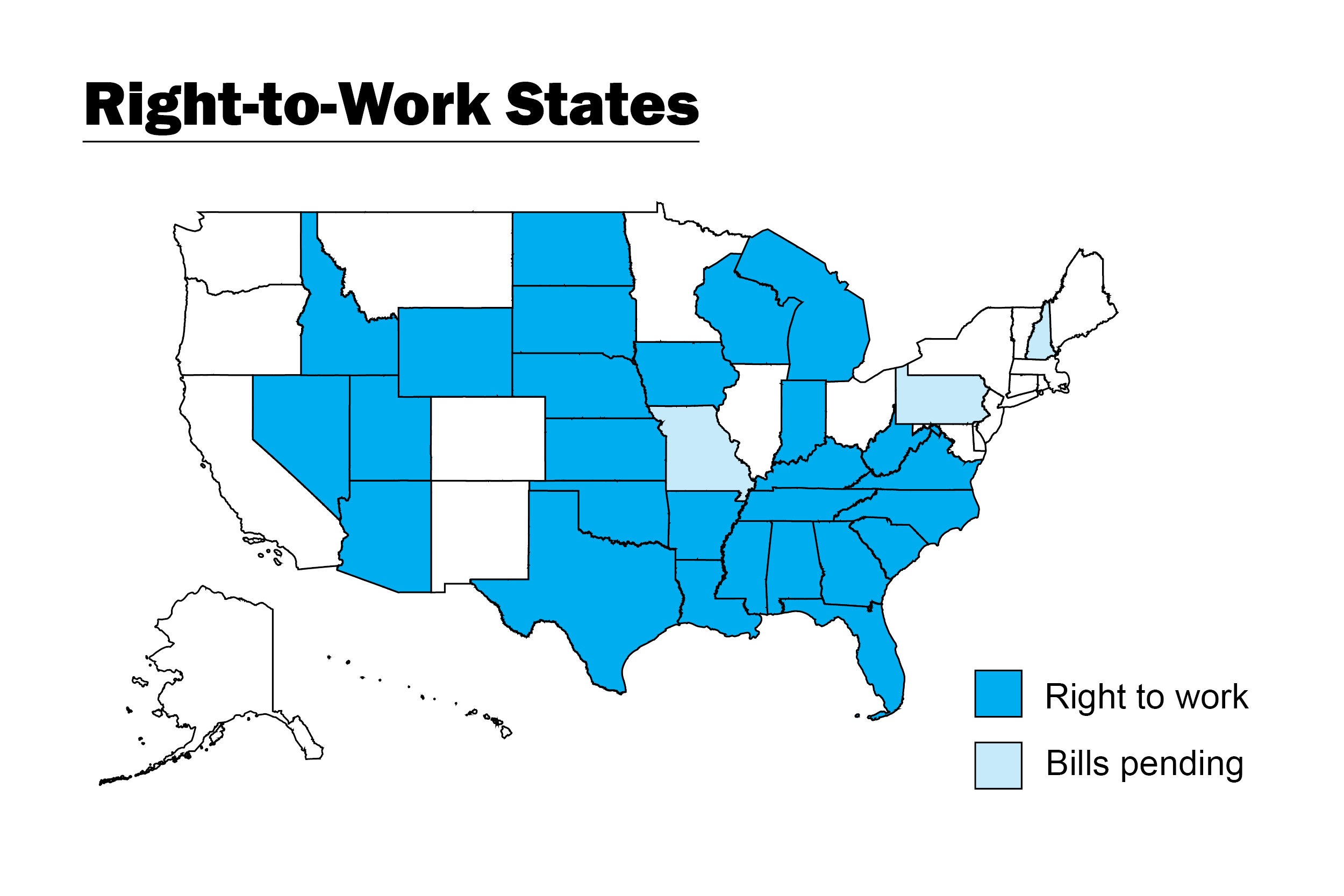 Keeping track of dues-paying members is key. Put one or two leaders in charge of tracking and coordinating with other stewards to get cards into non-members’ hands.

That means organizing your data. Along with the dues check, does the employer send your union a list of all dues-paying workers? If so, cross-reference your seniority list to identify those who aren’t paying. Organize them by department, and give a list to each steward or area leader.

In your union meetings, include monthly reports on membership where you name the people who are freeloading! This helps to create a culture where it’s not okay to freeload off your co-workers. Likewise, those who have joined should be recognized as the reason we can fight and win.

Representing the union as part of a larger movement reminds people why we need to be organized. Turn members out to support other unions in struggle. Many workers from other sectors who joined Verizon picket lines in the Northeast last year got a dose of excitement about labor’s power.

Your union should also be active beyond the workplace. Union members are community members, too — and often care about supporting local food pantries, fully-funded local schools, pro-worker candidates for public office, immigration reform, or the Movement for Black Lives.

You could start by checking what campaigns your union has endorsed nationally — but more important, talk with your fellow members to find out what they care about outside of work. You could conduct a survey on what issues people feel the union should get involved in. Also ask what connections members have already.

Publicize protests, upcoming elections, and community concerns, and build relationships with other working-class organizations. Unions have common cause with many other organized groups out there — and we will need each other in the years to come.

Training for Unions: Is your union ready? Labor Notes can help. We offer workshops and consulting to help your members, stewards, officers, and staff make a plan and develop the skills you’ll need to survive and thrive in an anti-union legal environment. Email [email protected] or call 718-284-4144.