The year 2008 was when the big banks were bailed out, but it was also the year that catalyzed one group of window makers into democratically running their own factory.

On the former industrial hub of Goose Island in Chicago, the employees of Republic Windows and Doors made headlines after they were locked out of their jobs just before Christmas without the back pay or severance they were owed. Organized by the United Electrical Workers Union, these displaced workers did exactly what the ownership hoped they wouldn’t do. They refused to quietly accept the layoffs. Instead, the workers engaged in a sitdown strike at their factory, garnering local and national media attention. Eventually, the employees won the occupation, forcing Bank of America and JPMorgan Chase (Republic’s primary creditors) to create a fund to give the workers their back pay, benefits, and health insurance. This became viewed as a much-needed victory for workers and unions in a desperate economic time.

And this January, more than seven years after their initial takeover, the workers finally received their last payment won from their struggle. According to the Chicago Tribune, “The National Labor Relations Board announced Wednesday that it will distribute to 270 union workers $295,000 in back pay stemming from labor law violations.”

While many people know about the takeover of Republic Windows and Doors, the story of what happened next has flown under the radar. In early 2009, not too long after the workers’ sit in, a company by the name of Serious Materials chose to partially re-open the factory, and many of the worker’s jobs and livelihoods were restored. That is, until Serious surprised everyone by shuttering the factory again. The country was still in the height of the great recession that put the housing market in ruins, which had devastating consequences for the window industry. And, according to the workers, Serious never made their Chicago factory a priority in its business plan. This meant that in only a few short years, these same workers had to face the prospect of job loss once more, and they had to go through the hardship of another sitdown strike.

This time, however, after the factory permanently closed, some of the workers were fed up with business as usual. In 2012, they re-started operations under new management: their own. With the help of their union, as well as organizations like the Center for Workplace Democracy and The Working World, these employees formed a cooperative, calling themselves New Era Windows, where workers were given one equal share in the business and one vote in its governance. 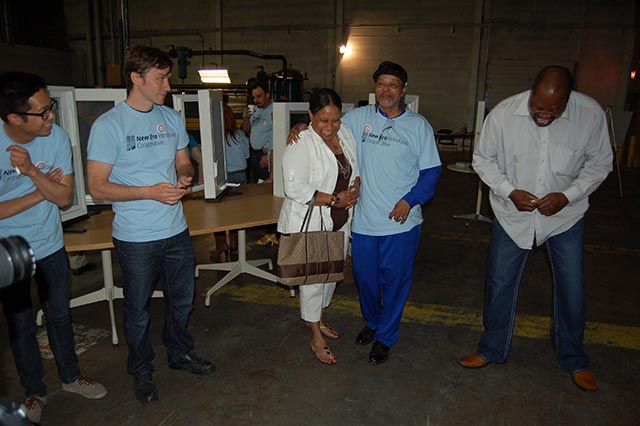 The best part? This co-op factory has survived in an industry where two previous non-democratic ownerships couldn’t, and it’s only growing. New Era had revenue of $750,000 in 2015, an increase from its first year’s revenue of $205,000, and all of that wealth is democratically controlled by the people that created it, going to directly benefit the workers and their families.

This co-op factory has survived in an industry where two previous non-democratic ownerships couldn’t, and it’s only growing.

Yet none of these achievements would have been possible if it weren’t for the workers’ union, which fought to get the employees what they were owed in the first place way back in 2008, and then helped them to form their worker co-op in 2012.

I’m also a member of a worker-owned cooperative, the TESA Collective, that has been educating and organizing for worker co-ops since 2010. We’ve traveled the country promoting the cooperative movement with tools like our board game Co-opoly: The Game of Cooperatives. Over the past six years, we’ve seen a steady rise in interest in worker cooperatives from unions. This is a promising development, because when we use the power of collective bargaining to build collective ownership, workers win.

Centuries of Working Together

Unions and worker cooperatives have had a storied history – sometimes allies, sometimes antagonists. Still, since the late 19th century, the two movements have found ways to aid one another. As far back as 1877, the Knights of Labor (KOL) were helping to organize worker cooperatives. And from 1880 to 1888, they were part of launching hundreds of co-ops. KOL’s goal was to create the “stepping stones for self-employment” that would lead to a “cooperative commonwealth.”

Through more modern times, unionized workers have continued to find ways to use the cooperative model to protect their jobs and improve their livelihoods. Union Cab of Madison, a cooperative taxi company with around two hundred and sixty members, was born in 1979 after union drivers struck for better conditions, and the owners responded by permanently shuttering the company. But some of these laid-off workers realized that this turn of events didn’t have to mean the end – because they were the ones who had the skills and expertise that kept their old taxi company running. It took hard work and personal sacrifice, including struggling to raise $150,000 in start-up capital and initially only paying themselves an average wage of eighty-cents an hour, but they managed to found a business where all the workers, from the drivers to the dispatchers, own and run things together. Because of this, Union Cab today has some of the best conditions and pay in the taxi industry.

Similarly, Collective Copies is a print shop in Massachusetts with eleven worker-owners, which was formed in 1983 after a strike for better pay and conditions against Gnomon Copies. The workers were actually successful in their strike, but unfortunately, two weeks later, Gnomon, which didn’t have a lease, was evicted from the building by the landlord. After months of picketing and organizing, the workers had won – but now they were out of jobs anyway. Instead of despairing, the workers decided to take action. They were inspired by their collective efforts with the union and were managing to (barely) stay afloat with their strike pay. So the workers turned to the cooperative model to launch a company that they wouldn’t have to strike against. They pooled their resources and expertise, forming Collective Copies, which is still in business more than thirty years later.

There’s been a sea change in the US over the past few decades, and unions have lost some of their historic power.

“Unions today are under siege from the private as well as the public sector,” says Mary Hoyer, Co-Chair of the Union Co-ops Council of the US Federation of Worker Co-ops. “Very few people in the US have ever been a member of a union or understand the enormous benefits of unionization.”

Hoyer believes that this is why more unions are beginning to intentionally turn to the worker cooperative model to fight for workers’ rights.

“Several labor unions are working with community and co-op coalitions to develop unionized co-ops from the ground up,” she said. “They include United Steelworkers in a ground-breaking agreement with Mondragon, United Food and Commercial Workers in their work in Cincinnati, Communications Workers of America, and the United Electrical Workers.”

What these stories demonstrate is that long after the traditional bosses are gone, we workers can thrive on our own.

This was an incredible turning point for the two movements. And its significance is even greater if one knows the USW’s history with worker cooperatives: In 1977, the USW stopped efforts by workers to form a cooperative to take over the Youngstown Sheet and Tube steel mill, a plan that might have been able to save hundreds or thousands of jobs.

But when Mondragon and the USW launched their collaboration over thirty years later, union president Leo Gerard had a very different perspective. He stated:

“To survive the boom and bust, bubble-driven economic cycles fueled by Wall Street, we must look for new ways to create and sustain good jobs on Main Street… Worker-ownership can provide the opportunity to figure out collective alternatives to layoffs, bankruptcies, and closings.”

The benefits from this collaboration have already started to bloom. The Cincinnati Union Cooperative Initiative, made possible because of the USW and Mondragon partnership, has helped launch two cooperatives: Our Harvest and Sustainergy. And even more are on the way. There are also union co-op initiatives being cultivated in roughly ten other cities, including Buffalo, New York, Pittsburgh, San Francisco/Oakland, and St. Louis. 1Worker1Vote, similarly created through the USW – Mondragon agreement, is an organization dedicated to advocating for and supporting the development of unionized co-ops nationwide.

But why would a business that’s democratically owned by its workers also want to have a union? That’s because worker cooperatives are not immune to labor disputes, especially as they grow larger. After all, cooperatives are systems of people, and people don’t always see eye to eye. That means that even if workers democratically run a business together, there are times when they might need someone else to defend them. While representing worker-owned cooperatives requires adjusting certain long-held frameworks and practices, unions can be critical in settling internal issues.

Working for a New Economy

Even though unions and worker cooperatives are increasingly standing together, there’s still common ground to be built.

“Getting unions to understand that worker cooperatives can be more than a small niche in the larger economy is a key hurdle to overcome,” says Tim Palmer, Research Director at the Democracy at Work Institute, which supports worker co-op development. Palmer, who previously worked with the Service Employees International Union (SEIU), added, “Just as importantly though, cooperatives need to understand that the larger size of the union world is not, by itself, a threat to democratic principles.”

Despite these hurdles, Palmer believes that worker cooperatives and unions can do much more to achieve their common goals.

“By developing genuine partnerships with unions and other worker organizations, the cooperative movement can gain some valuable allies in those efforts,” he said. “Unions could also play a key role in talking to business owners without succession plans about selling their business to their workers. Overall such partnerships hold a lot of potential to create new cooperatives, strengthen existing ones, and bring the cooperative message more squarely into the heart of American culture and politics.”

If unions do take on a larger effort to transfer ownership of existing businesses to their employees, we could see many more cases like New Era Windows – without the burden of having to occupy a factory twice.

And that would be one way we could truly transform our economy. After all, what these stories demonstrate is that long after the traditional bosses are gone, we workers can thrive on our own.

Share
Copyright, Truthout. May not be reprinted without permission.
Brian Van Slyke