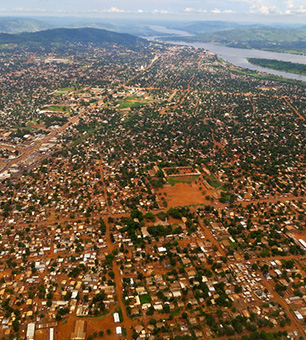 In March, the Muslim Seleka rebel alliance seized power and then-President Francois Bozize, who was from the country’s majority Christian population, fled. The CAR is now ruled by Michel Djotodia, who is Muslim and an ex-rebel leader. In the past few months, the CAR has “disintegrated into banditry, score-settling and horrific brutality,” with violence occurring increasingly along religious lines. Many Muslim fighters are thought to be allied to the Seleka; Christian fighters belong to “anti-Balaka” forces, “balaka” being the word for “machete” in the local Sango language.

In December alone, 1,000 people have been killed in clashes and 370,000 people, nearly half of Bangui’s population, have been displaced just in the past three weeks.

Throughout the CAR, about 1 in 10 people have fled their homes as armed men from the rival groups “trawl many areas looting, killing, burning crops and homes,” according to the BBC. Some 100,000 people are now living in a makeshift camp near the Bangui airport, where they have been struggling to find enough to eat.

Children Are Being Targeted

Amid all this, the violence and cruelty towards children still stand out. At least 60 children have been wounded and, last month, the United Nations said that the number of children recruited into armed forces has risen to 6,000. Most schools and hospitals outside Bangui have been looted and are no longer functional.

Souleymane Diabate, UNICEF Representative to the CAR, said in a news release that “targeted attacks against children are a violation of international humanitarian and human rights law and must stop immediately. Concrete action is needed now to prevent violence against children.”

International medical charity Doctors Without Borders has continued to operate its Community Hospitalin the country. 15 to 20 people, many with machete wounds, are being brought into the hospital daily. Three armed men came into the hospital on Christmas Day and threatened the safety of patients.

Since gaining independence from France in 1960, the CAR has experienced several coups, mutinies and rebellions and been ruled by a “notorious period under a self-declared emperor, Jean-Bedel Bokassa.” The country, which has a population of 4.6 million and is bigger than Spain and Portugal combined, is one of the least developed in the world.

While the current fighting is between Christian and Muslim groups, Christians and Muslims (who comprise 10 to 15 percent of the population) have actually “long lived in peace,” says Al Jazeera. The real source of the current clashes is a “political battle for control of resources,” which the CAR has in abundance. The country is rich in diamonds, timber, gold and oil, as well as water and mineral resources, virgin rainforests and “some of the highest densities of lowland gorillas and forest elephants in Africa.”

“Nature scattered diamonds liberally over the CAR” but, from colonial times up until today, “foreign entrepreneurs and grasping regimes have benefited from the precious stones” more than the people of the CAR.

Many foreign governments have been evacuating their citizens from the CAR. The African Union has sent almost 4,000 troops to the country; France has also deployed 1,600 soldiers there. Fears are rising that the fighting in the CAR could spread to neighboring countries including the Democratic Republic of Congo to the south and Sudan and South Sudan to the east. Chad, one of the world’s poorest and most corrupt countries, is also nearby.

Unicef itself is increasing its relief efforts in the CAR. Its representative Diabate also says that armed elements are “accountable for taking specific measures to provide” crucial protection to young persons. These include the immediate release of children associated with armed forces and groups, the prohibition of attacks against health and education personnel and allowing safe, unhindered passage of impartial humanitarian assistance.

As Unicef’s report about the brutalities against children in the CAR makes too clear, not only is the need for safe water and medical facilities isparamount, but also safe spaces for the most vulnerable: children.