New York — On Wednesday, July 9, 2014 New York City was one of many cities who held emergency protests in support of Palestine. Two rallies were coordinated: the first, “A Rally Against US funding of Israeli Terror” began outside the Israeli consulate in the city’s east side. Merging the rallies together, approximately 4,000 people marched to the News Corporation head quarters in the second rally, “For Accurate Media Coverage.” News Corp is home to Rupert Murdoch’s NY Post, FOX News, and Wall Street Journal.

Mainstream media was widely absent in a rally calling for media transparency. CBS local news was present and drummed up a West Side Story styled duel, reporting pro-Israel and pro-Palestine protesters both calling for a truce. CBS reporter Jessica Schneider fails to take notice of the size of pro-Israel protesters, 200 people at most, which quickly dispersed. It is unclear whether or not counter-protesters were calling for an end to all conflicts. What appeared to be a young man dressed as a rabbi was seen on the side of the Israel protesters shouting racial slurs. It was apparent that the protest was largely a rally against the settlement of Palestine and murder of its people. The people in New York City had something to say:

Free, free Palestine / End the occupation now / From the rivers to the sea / Palestine will be free! 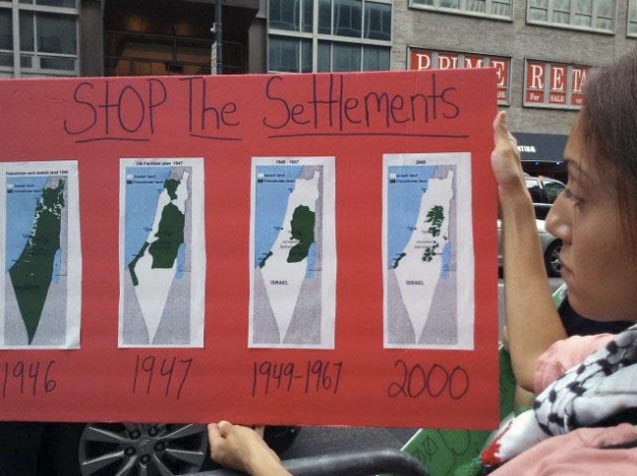 “I’m here for humanity, because we are supposed to help everyone. Jews are forbidden to occupy holy land. Jews are forbidden by the Almighty to have a state of their own and are commanded by the Almighty to be in exile, subservient to the nations of the world. Before 1970 we were living in peace with Muslims. Muslims were helping Jews. ” – Rabbi Joel Eidlisz of Boycott Israel. Eidlisz references Deuteronomy 4:25-27.

Israel and Hamas began this latest round of fighting after a spike in tensions fueled by the abduction and killing of three Israeli teenagers hitchhiking in the West Bank and what is suspected to be the revenge killing of a Palestinian teenager by Israelis. 53 people were killed in Gaza on Tuesday, July 8, 2014 bringing the total this week to 80. Among those killed, 18 were aged 16 or younger. The youngest victim, 18-month-old Mohammed Malakiyeh, was killed along with his 27-year-old mother. The oldest victim, 80-year-old Naifeh Farjallah, was killed in an air strike on the town of Moghraqa, southwest of Gaza City. As of

The single deadliest strike killed eight people Tuesday in southern Gaza when Israel bombed a home in the city of Khan Yunis. Attacks have been carried out by F-16 fighter jets, Apache helicopters, and drones. No Israelis have been reported killed.

At minimum, the US should stop sending aid to Israel. First step is to stop funding the war against Palestine. 400 tons of explosives have been dropped on Gaza with very little warning. The people have no place to go and can not protect themselves. This has been going on far too long.

Over the past 60 years, Israel has absorbed close to a quarter-trillion dollars in aid from the United States. Last year alone, Washington sent some $3.1 billion in military aid, supplemented by allocations for collaborative military research and joint training exercises. The United States covers nearly one quarter of Israel’s defense budget.

The United States’ support for the Israeli operation appears conditional, Israeli analysts said, as Washington called for “restraint from both sides.” On Wednesday, Hamas political leader Khaled Meshaal offered to renew the 2012 ceasefire based on three conditions: an end to the Israeli offensive, the release of prisoners initially freed under a prisoner swap but recently re-arrested in Israeli raids, and Israeli respect for the Palestinian unity government. Israeli officials have rejected Meshaal’s terms and vowed to continue the attack. Israeli Prime Minister Benjamin Netanyahu:

Today we expanded our operations against Hamas and the other terrorist groups in Gaza. We’ll continue to protect our civilians against Hamas attacks on them. Now, Hamas, by contrast, is deliberately putting Palestinian civilians into harm’s way. It embeds its terrorists in hospitals and schools and mosques, apartment buildings throughout the Gaza Strip. Hamas is thus committing a double war crime: It targets Israeli civilians, while hiding behind Palestinian civilians.

Marching amongst protesters was peace poet Luke Nephew. “I feel very full of emotion right now. I haven’t been to any actions for Gaza since I’ve been back from Palestine. The Palestinian people offered me the warmest and most generous hospitality I’ve received any where in the world. They, like their struggle, are profoundly human,” said Nephew. Nephew was in Palestine in March, 2013 before being deported from the country in April, 2013.

Several cities continue to rally. Next day of action is Friday, July 11, 2014.

Share
This article is a Truthout original.
Palina Prasasouk