© 2023 Truthout
News
|
Economy & Labor
Nate Hagens: Things Are Not Going to Be as Easy Over the Next 40 Years 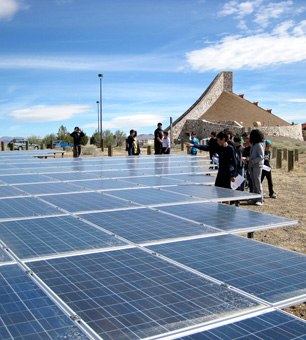 (Photo: BlackRockSolar / Flickr)Recently Karen Rybold-Chin interviewed Nate Hagens, former editor of The Oil Drum and former Lehman Brothers vice president, questioning him about a future economy without growth and an environment suffering climate change. Nate Hagens asks whether ultimately – contrary to our animal nature – we are willing and able to plan for future generations by reducing our own energy consumption and economic growth.

Dr. Hagens’ full lecture at the University of Wisconsin-Madison synthesizes concepts from economics, finance, energy, the environment and human behavior into some first-order principles that apply to our current world situation.

His basic message is that the primary drivers of historical economic growth – the inexpensive substitution of human labor by fossil labor, and recently, the explosion of available monetary credit – are no longer available, and this will spell the end of global growth.

Hagens explains that energy – specifically the cheap energy from the already found and burned fossil fuels – accounts for the majority of our past productivity gains and economic riches. It is thus not our lack of hydrocarbon resources that is the problem, but rising extraction costs – for example, 17 percent higher annually for oil since 2002 – that are making continued global growth from these levels unattainable.

Hagens suggests that a renewables-based economy, as promoted by many in environmental circles, is possible and even desirable, but will require far lower living standards. Ergo, wind and solar are part of the answer, but not to the question of “how can we continue growth.”

One way to make things better might be to get corporations to pay their share of taxes. To encourage Exxon Mobile to do so, please join our partners at Roots Action Here.

Share
Copyright, Truthout. May not be reprinted without permission.
Karen Rybold Chin

Karen Rybold Chin is a video journalist, active in video documenting many of the major educational, environmental and political issues of our day.