The stories of sexual assault in the military continue to emerge, yet most victims will never find justice, given the response from within the military. Article 120 of the Uniform Code of Military Justice covers rape, sexual assault and other sexual misconduct offenses. The U.S. Army’s Study Guide defines sexual assault as “heterosexual and homosexual rape, as well as non-consensual oral or anal sex, unwanted sexual contact or fondling, or attempts to commit these acts.” Thanks to the Department of Defense, more realistic figures surrounding sexual assault in the Armed Forces are beginning to be published. Last year alone, there were an estimated 26,000 cases of sexual harassment within the Armed Forces, but only 3,374 incidents reported. Of those 3,374, 9% only went to trial. The Armed Forces can tell you that there’s a 79% conviction rate, but that refers to the 9% of rapes that went to trial only. If one considers the total of sexual assaults, then the conviction rate would be 7%. What does this number tell you? That the way sexual assault is handled within the military is absolutely not working.

Below is a simplified version of the flow chart detailing what occurs once the decision to report a sexual assault is made in the military: 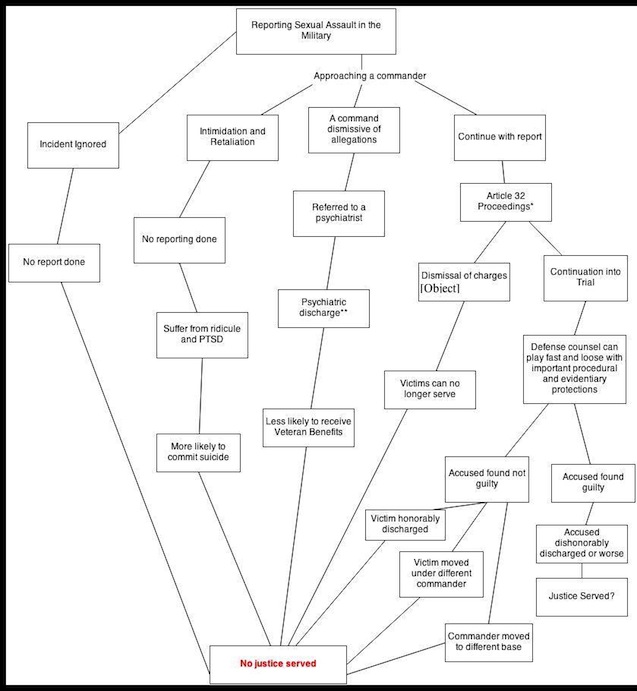 *Article 32 proceedings help determine whether cases are sent to courts-martial. As it stands now, Article 32 allows for grilling of “questions not allowed in civilian courts and can include cross-examinations of witnesses so intense that legal experts say they frighten many victims from coming forward.” (NY Times, September 2013)

**”Military records show the personality disorder diagnosis is being used disproportionately on women, according to military records obtained by Yale Law School’s Veterans Legal Services Clinic under a Freedom of Information Act request.” (CNN, April 2012) With such diagnoses, women are barred from serving and unable to use benefits from the military to pay for treatment, thus spiraling into financial burden.

What do all these situations entail?

Most outcomes depicted above do not positively affect victims, largely because reporting through the chain of command discourages many from coming forward. Furthermore, an astonishing percentage of those victims who do report unwanted sexual contact – 62% of women and 30% of men – experience some type of retaliation (Department of Defense 2012 Report on Sexual Assault in the Military Vol. II, 87-89, 198). This retaliation stems from both commanding officers and peers. Also, many of those who report sexual assault incidents end up facing psychiatric discharge themselves, a disproportionate number of them women. Indeed, women constitute the majority of all personality-disorder diagnoses, according to military records obtained by Yale Law School’s Veterans Legal Services Clinic (CNN April 2012). This same Clinic published a separate report detailing the discrimination that military sexual trauma (MST) victims experience when dealing with Veterans Affairs. Disability benefit claims for PTSD related to MST are granted at a significantly lower rate than other claims granted every year from 2008 to 2012 (Veteran Legal Services Clinic November 2013). When victims do report and the charges do proceed to Article 32 hearings, there is no guarantee that victims will be protected from immaterial interrogations about their intimate lives. If the accused is found innocent, they may return to their position as if nothing occurred. Finally, even if the accused is found guilty, such convictions can be overturned by higher ranking officials. Victims do not find justice in any of these outcomes.

Clearly, there is a structural problem with how the military manages sexual assault.

Two major things need to be done provide a safer environment for sexual assault victims within the military: amend Article 32 and take the trials out of the chain-of-command. Amending Article 32 to allow hearings and proceedings to be more like that of a civilian sexual assault case would eliminate loopholes that allow abusive interrogations and public trials. By taking the trials out of the chain of command, the process would be more independent and objective. Most victims are sexually assaulted by someone within their chain of command, therefore reporting to the chain of command is simply useless.

So, what can you do to help?

Support Senator Kirsten Gillibrand’s (D-NY) Military Justice Improvement Act bill- “an amendment to the annual national defense authorization bill [that] would remove the responsibility for the prosecution of rape, sexual assault and other criminal cases from the chain of command and hand it to independent military prosecutors [with a rank of colonel or higher]” (The Guardian, September 2013). Send letters to your state’s senators in order to garner support for this change.

Retired Lt. Gen. Claudia Kennedy, the first woman to be a three-star Army general, came out in support of NY Senator Kirsten Gillibrand with a letter that states, “After carefully thinking about this issue, I believe the Defense Department’s time to solve the problem on its own has expired” (Politico, September 2013). Emphasizing Kennedy’s comment, this past fiscal year (Oct. 2012-June 2013) there has been a 46% increase in the number of sexual assault cases reported within the Armed Forces. The jump might be due to an increase in crimes committed. Perhaps more cases are reported because victims feel safer in telling their stories, since there has been a media uproar on sexual assault in the Armed Forces. Both can be factors, but supporting Kirsten Gillibrand’s bill and amending Article 32 would allow even more victims to feel safer and attain the justice they deserve.

As of right now we “don’t have a culture that’s going to respect victims and make sure that victims have justice” (Senator Kirsten Gillibrand). ). Though the military prides itself on honor and credibility, the current sexual assault policies are undermining both. As Senator Gillibrand said, “zero tolerance” will not suffice. Instead a “zero occurrence” environment must be created.

Works Cited: (link to the articles within an article)

Share
This piece was reprinted by Truthout with permission or license. It may not be reproduced in any form without permission or license from the source.
Cristell Alejandra Perez
Sayra Alanis
Jasmine Isokpunwu
Alisha Zou
Truthout
Share
The stories of sexual assault in the military continue to emerge
Economy & Labor