Here, in the Pacific Northwest, the latest in a long line of First Amendment abuses by local police has fanned concerns about government spying. Domestic surveillance of peaceful activism is not only offensive and illegitimate, but also a serious threat to our Constitution that we must stop before it grows even worse.

As our state legislature has already decided:

“The people of this state do not yield their sovereignty to the agencies that serve them. The people, in delegating authority, do not give their public servants the right to decide what is good for the people to know and what is not good for them to know. The people insist on remaining informed so that they may maintain control over the instruments that they have created.” Washington State Public Records Act.

Yet, it seems that we have, indeed, yielded our rights. Nationwide, FBI intelligence investigations have violated the civil liberties of innocent Americans far more frequently and to a greater extent than previously realized. The Electronic Freedom Foundation analyzed FBI reports to the Intelligence Oversight Board (IOB), an independent, civilian intelligence-monitoring group that reports to the president. Among the nearly 2,500 pages of FBI reports to the IOB, 768 specific violations from 2001 to 2008 were revealed.

The allure of secrets gathered for “security reasons” is often compelling and even compulsive to government, especially when combined with the massive amounts of money being funneled to various security agencies throughout the United States since 9/11. As a result, Washington State has a sophisticated and interconnected intelligence collection and analysis network, involving the Washington State Fusion Center and a network of regional intelligence groups, which share information with local and tribal authorities, national security entities and private contractors.

According to the Heritage Foundation and the State of Washington Office of Financial Management, Washington State has received over $34 million solely for “Law Enforcement Terrorism Prevention.” This is only part of three billion dollars of Homeland Security funding at state and local levels since the beginning of this century, now including over $277 million spent by the federal government nationwide. With the level of surveillance often pervasive in Washington State, a new video by the ACLU of Washington highlights only a few recent examples of protected First Amendment activity being subjected to surveillance, in violation of federal and state laws. 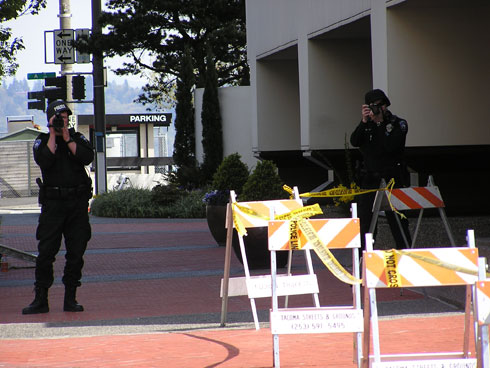 Far too much of our intelligence collection has been directed at noncriminal actions. Our knowledge of inappropriate surveillance activity has come from Open Records Act requests in our attempts to monitor these security institutions created rapidly after 9/11. It is every citizen's right – and responsibility – to oversee such agencies to prevent abuse, as history has repeatedly shown to occur if left unchecked.

Citizen oversight works. Because of a few citizens' monitoring, the Cities of Abeerdeen, Olympia and Tacoma, Washington, are now involved in lawsuits arising from alleged mishandling of personally identifiable information used to suggest the criminalization of lawfully protected First Amendment activities. Groups targeted in Washington State range from all types, such as the Tea Party, the NRA, Pro-Life, Pro-Choice, Minutemen, Raging Grannies, Quakers, People for Peace Justice and Healing Pierce County, SNOW, and many others (even non-organizational, casual, social gatherings) from all sides of the political spectrum.

The records clearly show that if you dissent, you will be monitored, and no group or person is above suspicion. This is not what we Americans expect. This is not legitimate national security.

For example, documents obtained from the City of Tacoma's Homeland Security Committee show that, in the spring of 2006, the Immigration and Customs Enforcement agency (ICE) reported on a women's conference hosted annually by Gov. Christine Gregoire at the Governor's Mansion in Olympia. ICE directed the Federal Protection Service (FPS), law enforcement, and other security partners to monitor and report on such planned activities within their respective jurisdictions. Additionally, ICE requested that local law enforcement and other security partners provide follow-up reporting.

Is the “Women's Leadership in Washington” really an extremist threat?

Intelligence reports pass among agencies at all levels without appropriate analysis, context, audit controls or criminal predicate. This unsubstantiated local “rumint” (rumor intelligence) is then quoted in other documents and has even made its way into federal Homeland Security databases. For instance, a recently released file (known as the “Towery Dossier“) contains unconfirmed and unredacted notes supplied by an informant, which were passed into the criminal intelligence system (though the documents assert no proof of crime), from which it was then passed out of state to other parts of the country for further misuse.

Not only was Towery's uncorroborated information used nationally, but in March of 2007, local police used the information as justification to provoke and attack peaceful activists. We can only assume that such false “evidence” supports those who discourage and suppress legal assemblies, protests and demonstrations.

The Towery Dossier proves that the City of Tacoma, Pierce County and the South Sound Regional Intel Center have inappropriately retained, disseminated – and now publicly released – highly sensitive, personal information about law-abiding people indicating no criminal intent. This means federal funds are being misused. Repeated claims from the Fusion Center that such leaks could never happen appear premature, raising the need for policies protecting personal information.

As we contemplate the security-crazed culture we have built, recall a passage in Lewis Carroll's “Through the Looking Glass” when the king raves: “The horror of that moment … I shall never, never forget it.” “You will, though,” says the Red Queen, “if you don't make a memorandum of it.”

The queen is right in two respects. First, inappropriate infiltration and reports of legal actions as “threatening” can smear and cause long-term damage to innocent citizens when such misleading information is senselessly spread among agencies. Second, we, the people pay for these activities for our benefit, and must do our own investigation and documentation of these agencies' activities to hold them accountable for their wrongdoing and make them change their ways.

We want law enforcement agencies to perform their duties as needed, but not by insinuating criminal activity where there is none and recklessly disseminating that information. It's long past time to create a mechanism for oversight, responsibility and accountability.